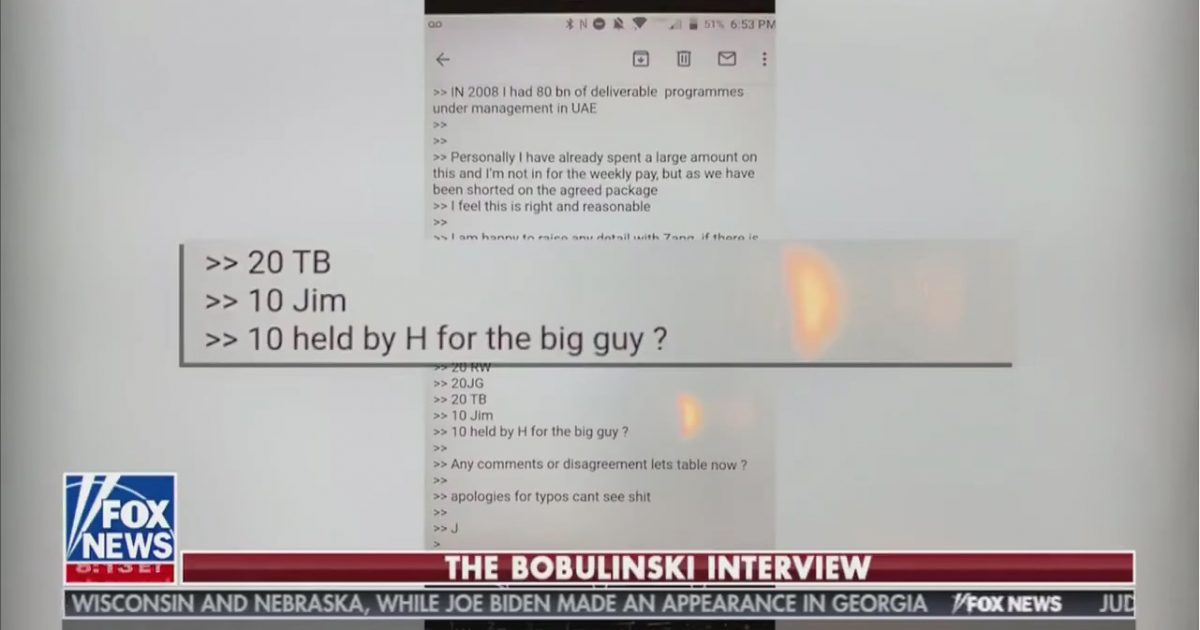 Bobulinski made the revelation during an interview with Fox News host Tucker Carlson.

During the interview, Bobulinski said he was “one thousand percent” sure the “big guy is referencing Joe Biden.”

He went on to claim he met with Joe Biden a number of times and that documents he provided show a portion of the equity of the business was to be divided.

Importantly, as Bobulinski explains, the documents show that 10 percent of the business was for Hunter that was intended for “the big guy.”

The specific deal being discussed was a business arrangement with an energy company from China called CEFC China Energy Company.

The controversy surrounding Hunter and Joe Biden initially arose when some emails and text messages about Hunter’s business dealings obtained from his laptop were released to the public.

Bobulinski also stated he is going public with this information because Joe Biden and Representative Adam Schiff (D-Calif), dismissed the claims of the former vice president’s involvement with his son’s business dealings as Russia disinformation.

As a former Navy Lieutenant, Bobulinski expressed personal outrage that his reputation was being damaged.

Bobulinski tells #Tucker what Joe Biden told him at the 2017 Milken conference to "to keep an eye on his son and his brother."

But from there, Bobulinski torches Adam Schiff for saying he's doing the work of the Kremlin and peddling Russian disinformation. pic.twitter.com/A47Z6Rihp5

While Fox News covers this important story, other networks are ignoring it.

How many times did the mainstream media mention it this morning?

The bias is unreal!

The accusations by Bobulinski coupled with the information on Hunter’s laptop show evidence of influence peddling and a pay-to-play scheme with a China business.

These allegations call for an investigation by government officials and the media but, unfortunately, protecting Joe Biden is more important than the truth.