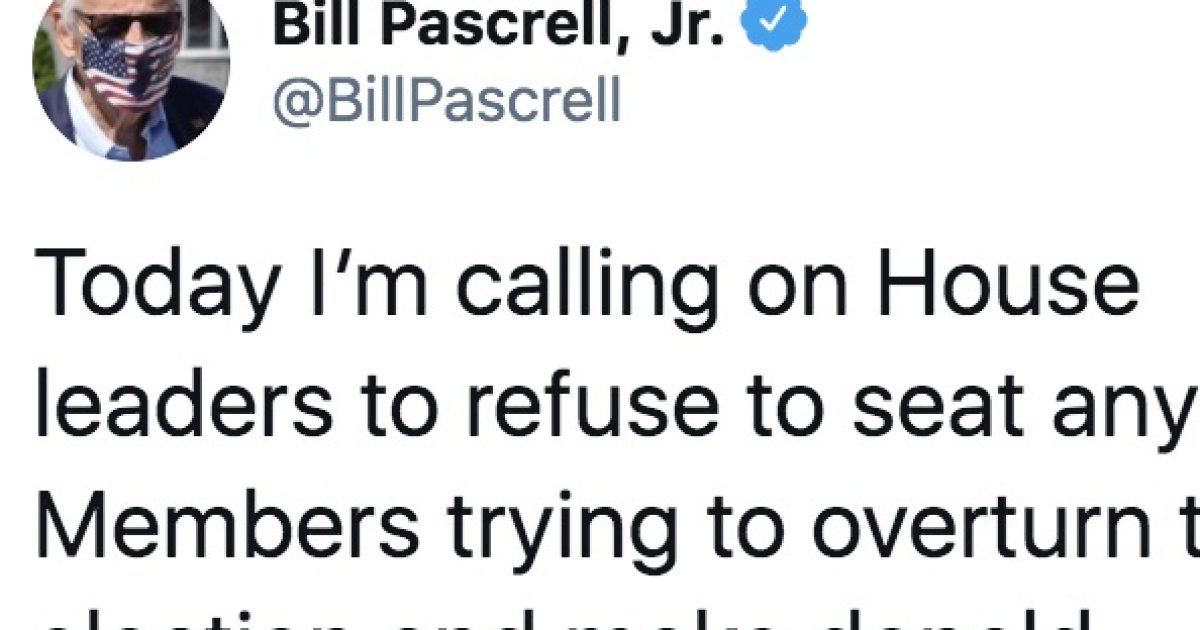 Democrats are expressing a keen desire to punish Republicans who back efforts to examine voter fraud allegations regarding the presidential election.

Pascrell is using the 14th Amendment to justify his call to action against his Republican House colleagues.

Today I’m calling on House leaders to refuse to seat any Members trying to overturn the election and make donald trump an unelected dictator. pic.twitter.com/icTmGKCpuR

Pascrell considers the Republican House members as “traitors” that want “to destroy the Union.”

Section 3 of the 14th Amendment was written after the Civil War to bar from government any traitors who would seek to destroy the Union.

My letter to House leadership today demands that 126 Republicans (and counting) are violating the Constitution. pic.twitter.com/4ti0OU1kpP

Pascrell believes the Republican House members were engaged in a rebellion on the grounds their effort was intended to “overturn a democratic election.”

The text of the 14th Amendment expressly forbids Members of Congress from engaging in rebellion against the United States. Trying to overturn a democratic election and install a dictator seems like a pretty clear example of that. pic.twitter.com/VMnDfd0sFx

And how mad is it that two of them are at the top of House Republican leadership?? @kevinomccarthy & @SteveScalise should be stripped of their positions. Even Moscow Mitch wasn’t stupid enough to put his name on that confederate lawsuit sewage. Difference btwn evil and stupid.

Reid also used the race card claiming Republicans challenging the results of the election, “…do not and will not accept that Black voters should be allowed to cast votes, however legal those votes may be, to overrule the desires of a majority of white voters.”

THIS is what undermining democracy looks like. Democrats want to punish the few courageous Republicans we have left for filing a good faith amicus in support of upholding the Constitution and the rule of law.https://t.co/xJEdZcpksi

It’s obvious to me that the Democrats goal here is to silence Republican views and is ultimately an intimidation game.

This type of intimidation drives fear in judges & state legislators & prevents them from defending @realDonaldTrump https://t.co/DdCpqhg5Ka

Threats issued by Michigan state representative Cynthia Johnson to supporters of President Trump provides additional evidence that intimidation is a feature of Democrats.

Tony Soprano was more subtle than this pic.twitter.com/sUtcE4PI3Y

Democrats used to be champions of free speech but now those days are over.

The new Democrat strategy is to silence their political opposition by seeking to punish them including demanding a loss of political positions and even a loss of job opportunities for those that worked for or backed President Trump.

Retaliation against political opponents is a Communist strategy and it needs to be called out.