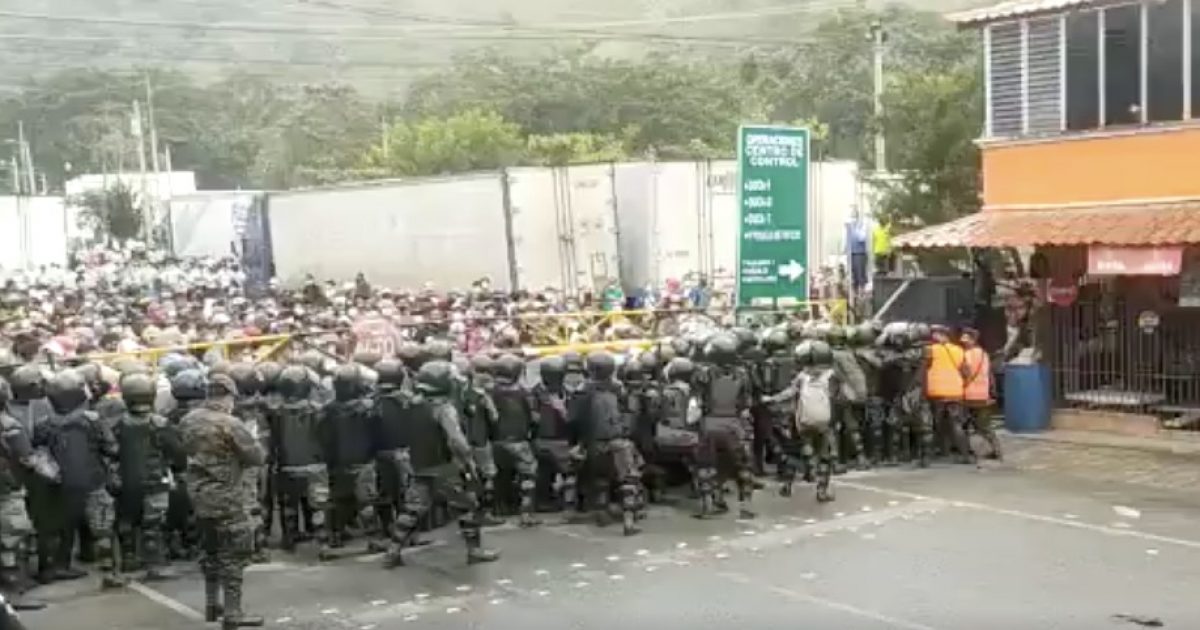 Video clips circulating on social media show a huge caravan of thousands of Honduran migrants heading to the U.S.

It’s reported the caravan swelled to as many as 9,000 men, women and children.

Video posted on social media over the weekend show some of the migrants overrunning and clashing with Guatemalan soldiers.

Caravan from Honduras busting through Guatemala Border in route to the USApic.twitter.com/ZSdFqGLzxb

Guatemalan soldiers blocked part of a caravan of as many as 9,000 Honduran migrants Saturday at a point not far from where they entered the country seeking to reach the U.S. border.

Guatemalan President Alejandro Giammattei issued a statement for Honduran authorities “to contain the mass exit of its inhabitants.”

“The government of Guatemala regrets this violation of national sovereignty and calls on the governments of Central America to take measures to avoid putting their inhabitants at risk amid the health emergency due to the pandemic,” Giammattei’s statement continued.

A migrant caravan moving from Honduras toward the U.S. border is calling on the incoming Biden administration to honor what it says are “commitments” to the migrants moving north, amid fears of a surge at the border when President-elect Joe Biden enters office.

U.S. Customs and Border Protection Acting Commissioner Mark Morgan issued a statement telling those considering the trek, “Do not waste your time and money, and do not risk your safety and health.”

Morgan also said it’s a “deadly journey,” that the U.S. is working with regional countries and that a new administration doesn’t affect the pledge made by the U.S.

The United States stands united with our partners in Mexico, Honduras, El Salvador, Guatemala, Belize, and the rest of the region in our commitment to the rule of law and public health. This commitment is not affected by a change in administration in the United States.

Comments critical of Biden and the caravan were posted on social media.

A Honduran migrant caravan is heading to the United States.

This is the future Democrats’ voted for.

our new country is going to be great!

They already know that good old Joe is gonna come in clutch with those tax payer dollars.

Clearly, Biden’s statements about immigration, including amnesty, is sending a message to the world that sneaking into the U.S. is the fastest route to become a citizen.

The caravan of Honduran migrants are responding to an incentive provided by Biden.

Migrants from any country seeking to enter the U.S. illegally are wrong and that fact should be communicated by Biden.

America is a country of laws and anyone who wants to come to the U.S. must do so legally.