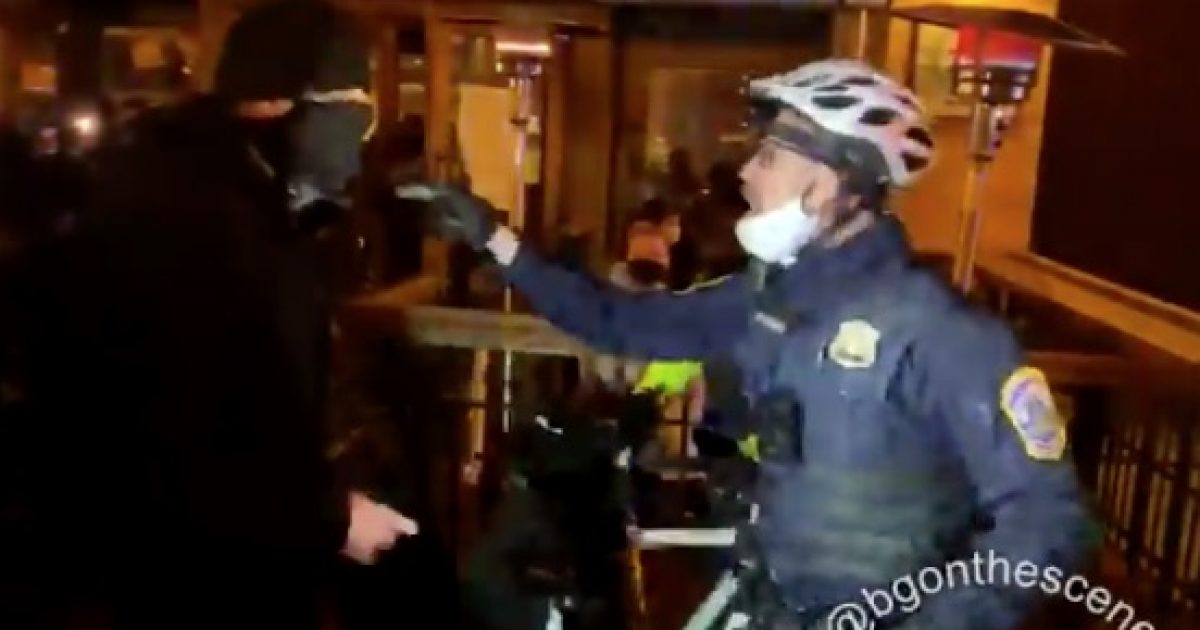 Black Lives Matter and Antifa protesters took to the streets of Washington, D.C. over the weekend where chants of “burn it down” could be heard.

Chants of “If we don’t get it, burn it down” as the march continues in DC tonight #DC #DCProtests #WashingtonDC pic.twitter.com/YMxy90P4oj

The police tried to shield outdoor D.C. diners from the mob.

DC Police are forming lines around the outdoor diners to separate them from the protesters marching past #DC #DCProtests #WashingtonDC pic.twitter.com/g4uIrc39P9

Protesters clashed with the police.

An officer swats away one of the flashlights, leading to brief clashes as police push forward into the crowd in front of outdoor diners here in DC #DC #DCProtests #WashingtonDC pic.twitter.com/UuA76fH5X4

Although the incident is under investigation and the officers involved were suspended, Black Lives Matter protesters turned violent.

BLM rioters are trying to break down a second barrier at the Rochester police station after overturning the first fence. pic.twitter.com/0yqdLnhyMH

Protesters have started taking the fence down and moving closer to the police station. #ROC pic.twitter.com/FCOUU3ksjO

While their street violence continues, Black Lives Matter was recently nominated for the Nobel Peace Prize.

The organization was nominated by Petter Eide, a Norwegian member of parliament, who said the movement is “bringing forward a new consciousness and awareness about racial justice.”

Along with the award comes a $1 million prize.

The U.S. experienced 637 riots between May 26 and Sept. 12, and 91% of those riots were linked to the Black Lives Matter movement, according to the US Crisis Monitor, a joint project of the Armed Conflict Location & Event Data Project and the Bridging Divides Initiative at Princeton University.

The BLM movement was linked to 91% of the riots that occurred across the country over the summer, which resulted in the most expensive property damage in insurance historyhttps://t.co/nB6cxFRLkK https://t.co/9qVrLTD7nE

Black Lives Matter and Antifa are dangerous radical groups that continue to harass and intimidate law enforcement and innocent bystanders.

Political leaders, especially President Joe Biden, need to take their threats seriously and denounce the actions of these groups.