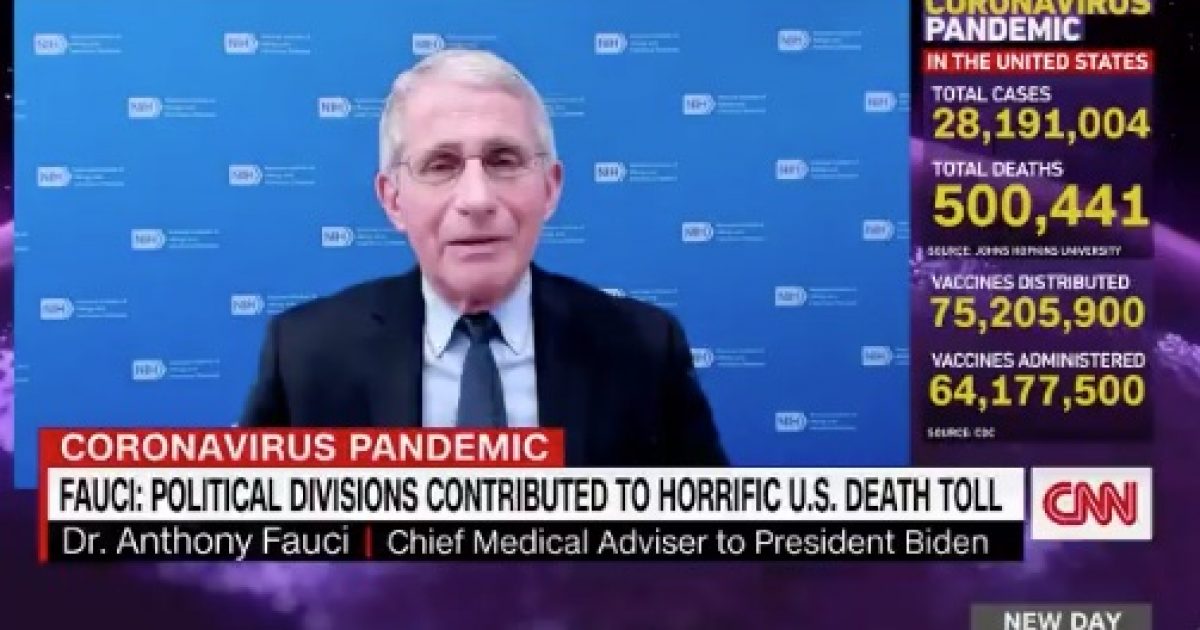 Dr. Anthony Fauci, Director of the National Institute of Allergy and Infectious Diseases, failed to take any responsibility for the U.S. 500,000 COVID-19 death toll and chose to point fingers at others during a CNN interview.

In response to a direct question asking whether former President Trump’s “denial and lack of facts” contributed to the magnitude of the pandemic hitting the U.S., Fauci responded, saying, “I’m uncomfortable going back and directly criticizing,” but then criticized the former president by adding “but it’s really almost self evident.”

Fauci also blamed states and politics for not uniformly attacking the virus.

Political divisions contributed to the 500,000 Covid-19 deaths in the US, Dr. Fauci says.

“When you have a common enemy you’ve got to pull together in the same way … like people on a crew team rowing in the same direction. You can’t have disparate responses.” pic.twitter.com/XWHbow1xbC

It’s unfortunate the discussion was not focused on what Fauci’s role was during the first few months in 2020.

For example, on February 29, 2020, on the Today show, Fauci said “Right now at this moment, there is no need to change anything that you’re doing on a day-by-day basis.” Watch the video here.

Critics weighed in on Fauci on social media.

Fauci admits U.S. COVID response has been “worse than most any other country.”

He remains the highest paid employee In the entire U.S. fed gov. Why should we continue to trust a man that was part of a "failed administration?" https://t.co/5LFNDJK9ra

Never forget that the single person who was the most devastating to the cause of public faith in mass masking was in fact Dr. Fauci himself, but somehow the Lockdown Authoritarians give him a total pass for that. The little lab coat tyrant is too useful for their power grab.

Dr. Fauci has very clearly exploited a crisis for his own ego and pursuit of stardom. He has no regard for the businesses destroyed, lives taken from suicide, or the children who have fallen behind in school. But hey, did you see that TV interview he did the other day? #FireFauci

Fauci had one job to do – to stop a pandemic such as COVID-19 from harming Americans yet his failure to recognize the emerging viral threat in January and February of 2020 added to the severity of the pandemic.

Since the media has little interest in holding Fauci accountable for failing at his basic duty, unfortunately, he will be able to get away with blaming others.