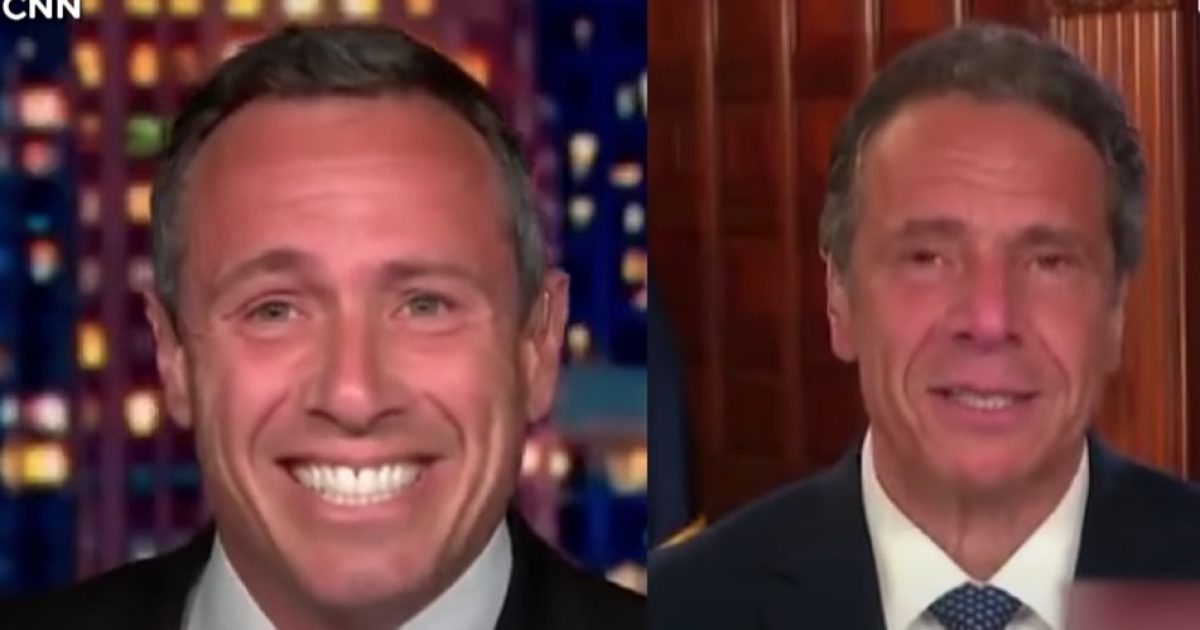 Andrew is now facing a third claim of sexual harassment by two women who worked closely with the governor and by another woman who met the governor at a wedding reception.

Chris briefly commented about his brother on his show Monday night.

>> @ChrisCuomo at the top of @CuomoPrimeTime tonight: "Obviously I am aware of what is going on with my brother. And obviously I cannot cover it because he is my brother. Now, of course CNN has to cover it. They have covered it extensively and they will continue to do so." pic.twitter.com/G49mZYTG4D

The sexual harassment allegations aren’t the only thing Andrew is facing.

The backlash against Governor Cuomo is heating up for his failed COVID-19 mandate which included a March 25, 2020, order mandating nursing homes to accept COVID-19 patients and the allegations of covering up the nursing home death tolls.

Chris conducted numerous jovial interviews with his brother on his show to discuss his handling of the coronavirus while ignoring the alleged coverup of nursing home deaths.

However, last month, CNN imposed a ban on Andrew from appearing with Chris.

CNN claimed Wednesday that it has reinstated a “rule” that prevents Chris Cuomo from “interviewing or covering his brother” — after the host completely ignored the nursing home death cover-up scandal engulfing Gov. Andrew Cuomo.

Last year, the media heaped constant praise upon the governor over their view of how he handled the virus, essentially ignoring his gross failures with New York’s vulnerable elderly population.

A year ago, they couldn't stop hyping Cuomo and praising his "leadership." We have the receipts. pic.twitter.com/P8VZ6ZFAc4

FLASHBACK: The media couldn't stop hyping Andrew Cuomo and his "leadership" a year ago.

Yet they can't bring themselves to cover his ongoing COVID nursing home scandal now. https://t.co/52MP38wwRC

Now, the media is covering the governor’s nursing home controversy.

They are hiding this bombshell from you. https://t.co/benxvwmDeo

President Biden’s press secretary Jen Psaki was asked by a reporter if Governor Cuomo should resign over the sexual harassment allegations so that it’s not a distraction concerning his handling of the virus.

WHAT?! AP Reporter to Psaki: Should Cuomo Resign to Avoid 'Distractions' from COVID? | Newsbusters https://t.co/YZWCjLCgbC

The scandals surrounding Governor Cuomo demand a full investigation and reporting by the media.

However, little brother Chris is going out of his way to provide air cover for the failures of his older brother.