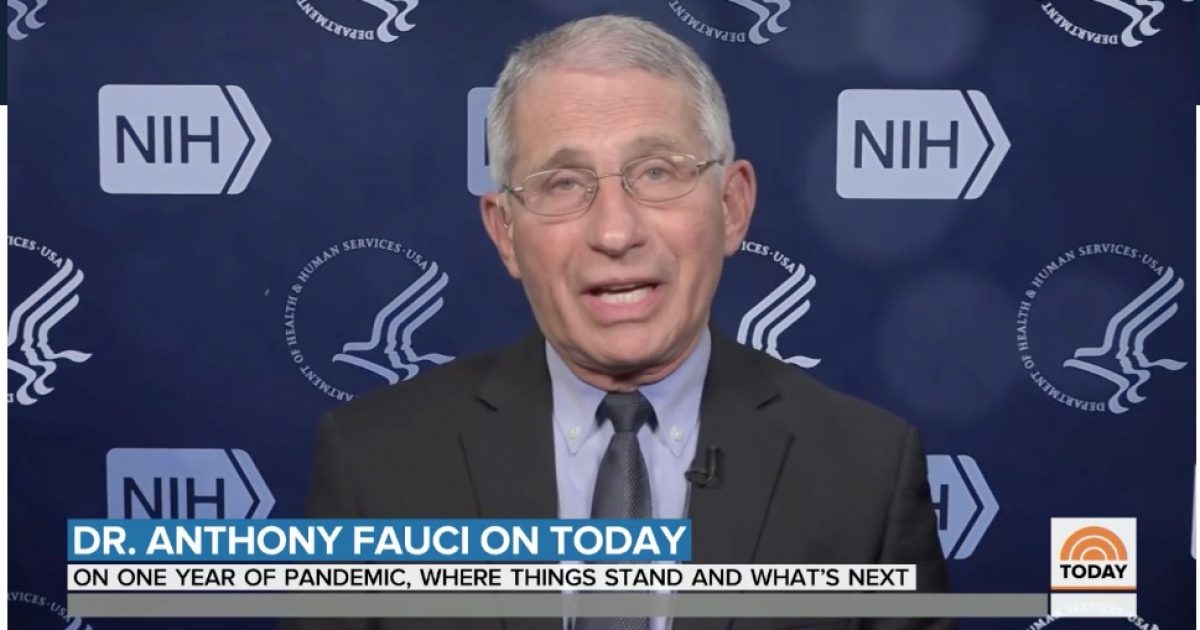 Dr. Anthony Fauci, Director of the National Institute of Allergy and Infectious Diseases, blamed politics for the high COVID-19 death rate in the U.S. that is now over 525,000.

During an interview on NBC News on the anniversary of the virus outbreak being declared a pandemic by the World Health Organization (WHO), Fauci said the public health response, “…was really very much influenced by the divisiveness that we had in this country.”

This is not the first time Fauci blamed politics.

Political divisions contributed to the 500,000 Covid-19 deaths in the US, Dr. Fauci says.

“When you have a common enemy you’ve got to pull together in the same way … like people on a crew team rowing in the same direction. You can’t have disparate responses.” pic.twitter.com/XWHbow1xbC

Fauci did not hold himself accountable for any of the COVID-19 health impact.

As the top infectious disease expert in the U.S., Fauci was slow to recognize the seriousness of the virus.

For example, on the Today show on February 29, 2020, Fauci said, “Right now at this moment, there is no need to change anything that you’re doing on a day-by-day basis.”

During a hearing a year ago today, Fauci said the virus would get worse but his testimony was far from a call to action.

“So I can say we will see more cases, and things will get worse than they are right now,” Fauci said. “How much worse we’ll get will depend on our ability to do two things: to contain the influx of people who are infected coming from the outside, and the ability to contain and mitigate within our own country. Bottom line, it’s going to get worse.”

Even with Fauci saying, “it’s going to get worse,” falls far short of sending out the alarm bells about the potential of the pandemic on the U.S.

In fact, during the interview today he admitted that his assessment did not contemplate the seriousness of the pandemic, saying, “… I did not in my mind think that ‘much worse’ was going to be 525,000 deaths.”

Blaming others – in this case, politics – is so typical of career government bureaucrats.

Fauci’s job was to anticipate and warn the public about the health consequences of a pandemic and he was very late to recognize its threat.