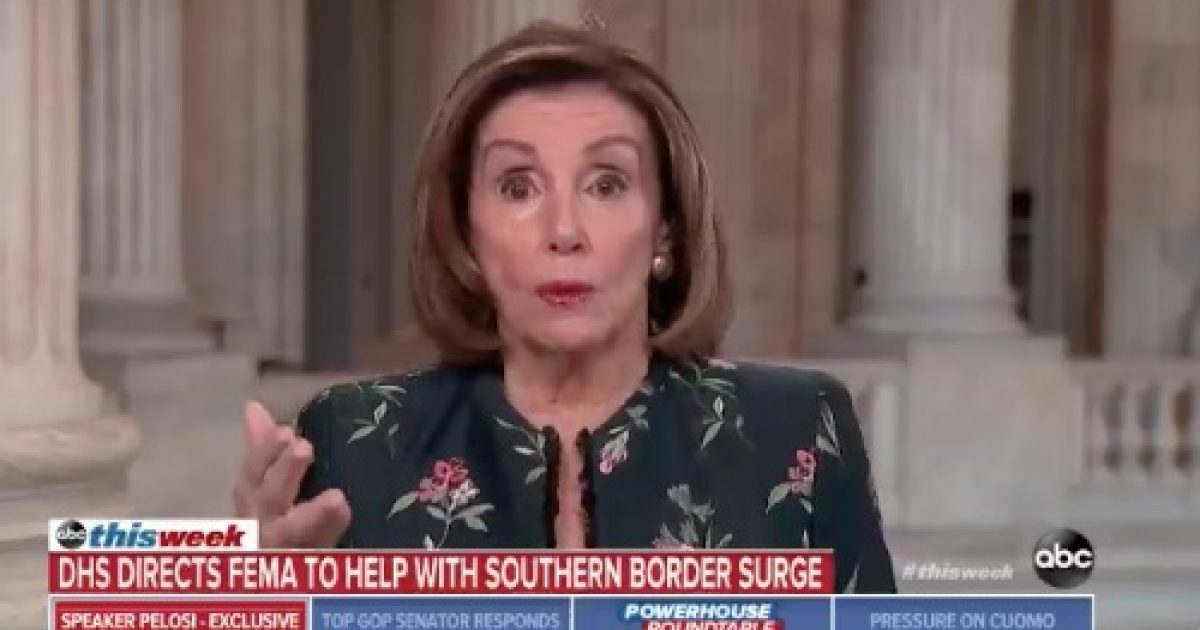 Speaker of the House Nancy Pelosi (D-CA) believes the “challenge” at the border is a result of climate change and that President Biden inherited a “broken system” from former President Trump.

Pelosi delivered her assessment on ABC News’ “This Week.”

“What the administration has inherited is a broken system at the border, and they are working to correct that in the children’s interest,” Pelosi said.

House Speaker Nancy Pelosi calls the surge of migrant children crossing the Southern border "a humanitarian challenge," adding that the Biden administration has inherited a "broken system at the border." https://t.co/UNXhabLMfs pic.twitter.com/on69lT7LLX

The Speaker also said climate change was the reason so many migrants are leaving their country and entering the U.S.

The New York Post wrote about the surge of migrants coming to the U.S. which includes, “More than 29,000 unaccompanied minors crossed the border in February,” and over 100,000 individuals caught coming into the U.S. illegally in Feburary.

Last week, Pelosi attacked Republicans over the crisis at the southern border claiming they are using it as a “distraction.”

.@RepArrington reacts to Pelosi calling the border activities a distraction.

“What an insult to the people who are suffering as a result of the deluge of illegals crossing into the country.” https://t.co/6psrdu4pta pic.twitter.com/uMHbs3L1lh

Nancy Pelosi is more upset about conservatives talking about the growing border crisis than the actual crisis itself. https://t.co/Rzh4NkYuJG

In classic Democrat form, Pelosi is blaming others for what she is actually saying about the border.

Her claims about Trump and climate change are the real distraction.

Pelosi is pointing fingers at Trump and blaming climate change for the surge at the border.

Nothing can be further from the truth.

President Biden sent a signal to the world that the U.S. border was open.

Biden delivered on his promise to stop the construction of the border wall and now wants to give amnesty to illegal aliens living in the U.S.

Biden, Pelosi and the Democrat Party own the southern border crisis.

Biden inherited a secure border and he is destroying it – it’s that simple.