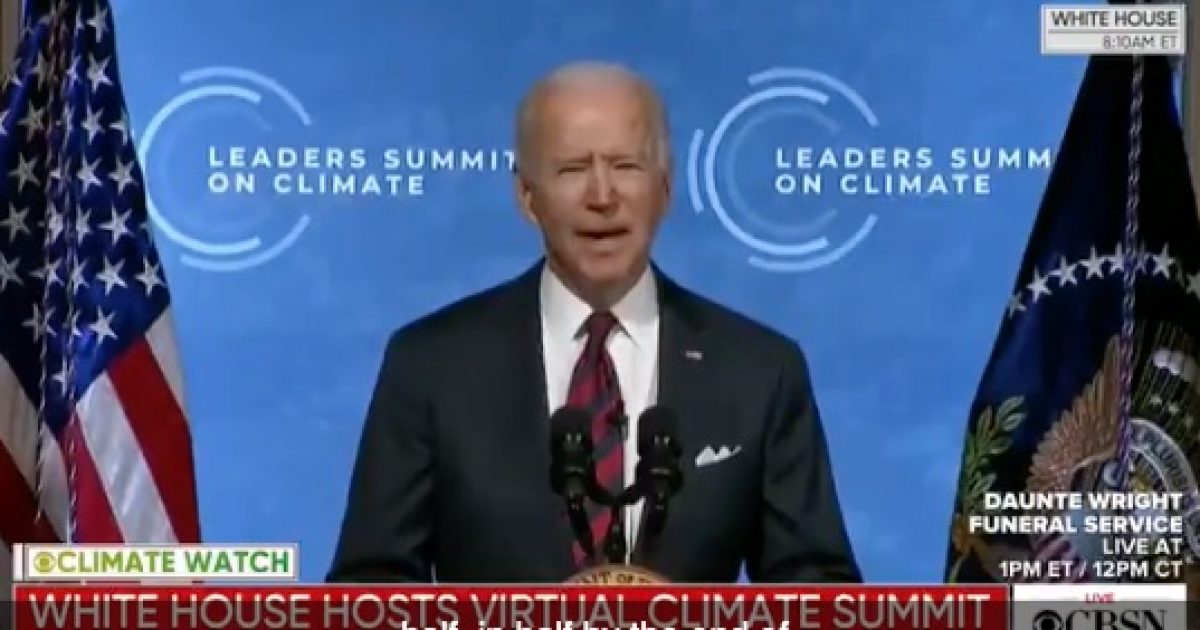 President Biden pledged the U.S. will reduce carbon emissions from the 2005 levels by approximately 50 percent by the year 2030.

Biden made the declaration from the White House during the virtual Earth Day Climate Summit with world leaders.

Biden pledged that the U.S. will cut greenhouse gas emissions by at least half from 2005 levels by 2030:

"No nation can solve this crisis on our own. All of us, all of us, and particularly those of us who represent the world's largest economies, have to step up." pic.twitter.com/9xUfAfvnhS

The climate summit is aimed at jump-starting negotiations for a global deal to curb emissions world-wide. The event features 40 heads of state, with allies and rivals such as Russia and China among them.

No nation or region is immune to climate change. So as a global community, it is imperative that we act quickly and together to confront this crisis.

Day one of the two-day virtual event was posted online.

While China is the world’s biggest polluter, Biden avoided pointing out the elephant in the room during his remarks.

Approximately $5.7 billion was offered by Biden to assist foreign nations to cut their emissions.

The Biden administration said it plans to offer an estimated $5.7 billion a year by 2024. In a statement, the White House said that it would “work closely with Congress to meet these goals.”

The online event didn’t appear to be popular.

Biden delivers remarks ahead of his Leaders Summit on Climate.

625 viewers on the White House page. Majority of those viewers have "disliked" the stream.@OANN pic.twitter.com/MFuefKXnIV

Importantly, the U.S. is reducing emissions more than other countries.

The United States led the developed world in reducing carbon emissions the year after pulling out of the Paris Climate Agreement. #EarthDay2021 #climatetruth

Overall, Biden wants the U.S. to have a goal of net-zero emissions economy by 2050 even though “America represents less than 15 percent of the world’s emissions.”

Biden’s climate change plans are a major step in the wrong direction as he continues to execute his America Last agenda.