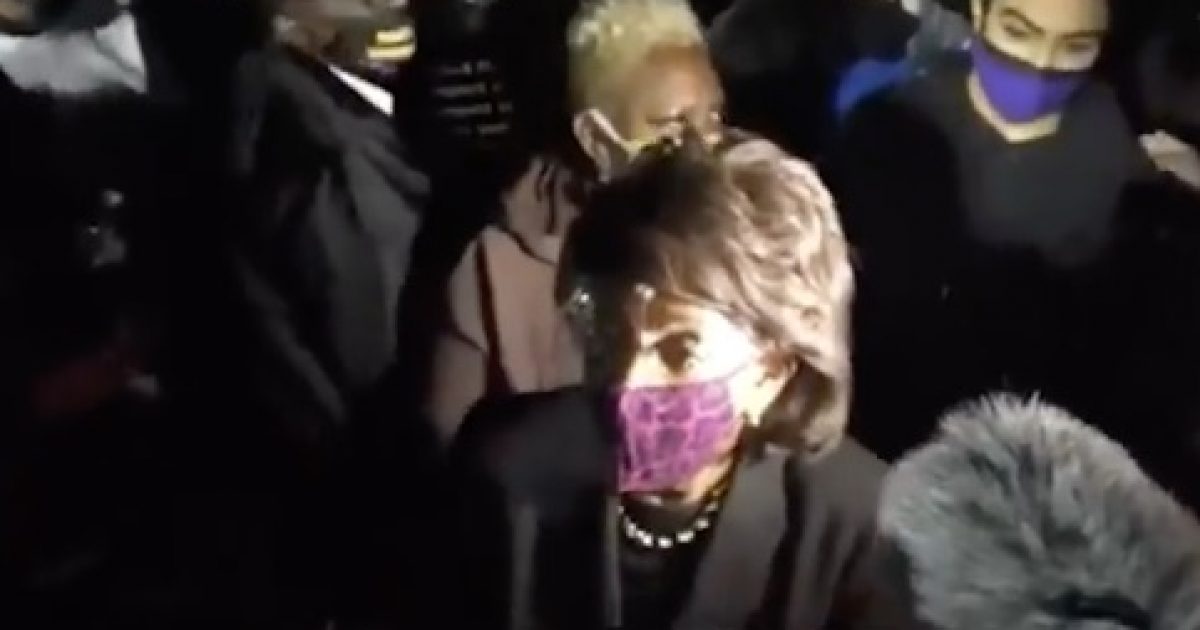 Breaking police curfew along with the protesters Saturday night, Waters’ comments were in response to the Derek Chauvin trial.

Waters traveled to Minneapolis the weekend before closing arguments in the trial of Derek Chauvin, charged with murdering George Floyd on May 25. She also spoke amid protests in response to the killing last week of Daunte Wright, a black 20-year-old shot and killed at a traffic stop by a white police officer, Kimberly Potter.

Regarding the Chauvin trial, Waters said, “We’re looking for a guilty verdict.”

Following Water’s comments, there were reports the Minnesota National Guard came under fire in a drive-by shooting Sunday morning.

The Minnesota National Guard said some of its members came under fire in northern Minneapolis on Sunday morning. https://t.co/7SDvwJCyAY

Republican lawmakers weighed in on Waters.

Why is Maxine Waters traveling to a different state trying to incite a riot? What good can come from this? https://t.co/nXzV0trmN3

Due to the continued dangerous and toxic incitement to violence by Maxine Waters, she should be immediately removed from Congress. Her rhetoric is poisonous.

They want to tear us apart.

“'We gotta stay on the street,' Waters was recorded saying, adding that protesters needed 'to get more confrontational' & they should ignore the curfew in place.” https://t.co/PWW7YNDbKR

Maxine Waters is inciting violence in Minneapolis — just as she has incited it in the past. If Speaker Pelosi doesn’t act against this dangerous rhetoric, I will bring action this week.

On Sunday, Georgia Republican Representative Marjorie Taylor Greene said she will, “be introducing a resolution to expel Rep. Maxine Waters from Congress for her continual incitement of violence.”

Critics hit back at Waters on social media.

That's incitement to riot , no mention of due process or anything but the encouragement of vigilante type behavior.

Hey @FBI, while you were focused on jaywalkers and trespassers, @RepMaxineWaters here acted as an insurrectionist, inciting domestic terrorists to fire on our military. https://t.co/uKJjkIWGm2

Businesses are preparing for more rioting over the outcome of the trial.

Businesses are preemptively boarding up across America as Black Lives Matter prepares another ruthless campaign of domestic terrorism in the wake of the Chauvin trial.

The System wants you focused on “far right militias”. https://t.co/0xzIpwuR62

I live very near downtown Minneapolis. Many businesses are boarded up. It’s scary and sad. I was to donate platelets Mon. at downtown Red Cross but it will be closed Mon. & Tues. in anticipation of civil unrest. ?. Praying for honest justice and no riots. https://t.co/q6HZV7N14e

Waters’ comments for protesters to be more confrontational are reckless and dangerous especially since rioting and looting are happening in Brooklyn Center, Minnesota.

All members of Congress should denounce Waters and the House of Representatives should expel her from office.