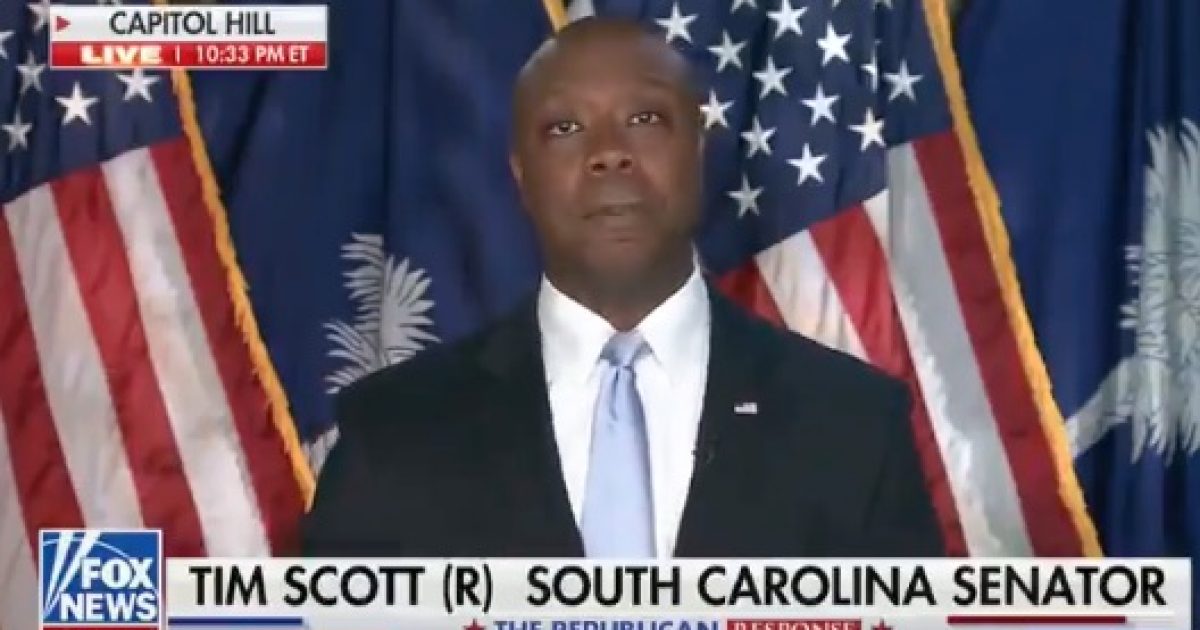 Scott delivered the Republican remarks responding to President Biden’s joint address to Congress on Wednesday evening and called for unity.

“Our nation is starving for more than empty platitudes; we need policies and progress that brings us closer together,” Scott said minutes after Biden concluded his rough 60-minute speech on the House floor. “But three months in, the actions of the president and his party are pulling us further and further apart.”

During his comments, Scott said America is not a racist country and called for the importance of common ground to talk about race and called out the liberals for calling him the N-word and an Uncle Tom.

ICYMI: @SenatorTimScott calls out "progressives" who have discriminated against him, from calling him an "Uncle Tom" and "the N-word," to questioning his family's history growing up in the Jim Crow south. pic.twitter.com/id138msRGk

Scott also said children today “are taught that the color of their skin defines them,” and that money is being made by people ignoring the progress America has made regarding race relations.

Responding to his speech, liberals called Scott “Uncle Tim” and other derogatory names that trended on Twitter.

Tim Scott gets called Uncle Tom by progressives. But he’s an Uncle Tim.

In my defense I actually said “Uncle TIM.”

And he was talking about his nephews!

Trotting out Tim Scott, Candace Owens, and a host of other uncle and auntie ruckuses to deny the existence of white supremacy, racism, and anti Black bigotry neither erases America’s ugly racist past nor its current racist treatment of Black people.

Twitter is choosing to trend a racist attack from the left on Sen. Tim Scott, the black Republican senator from South Carolina. pic.twitter.com/kpyPOHnuXJ

That this racist term trended during Sen. Tim Scott's speech is as revealing as it is repugnant, as is the large-scale liberal silence that Twitter promoted a racist attack.

A world in which people of color are forced by racist insults to subscribe to one ideology is grotesque. pic.twitter.com/NDksUEriHn

Sen. Tim Scott: “America is not a racist nation.”

Sen. Scott is right. America is not racist. Democrats are.

I applaud Senator Tim Scott for his comments and for pushing back on the lies from Democrats that America is a racist country.

Scott is being attacked because Democrats want to disparage him because he’s a black Republican and to send a message to others not to speak out.

It’s not surprising Twitter made sure the derogatory comments against Senator Scott are trending – Twitter is part of the problem.