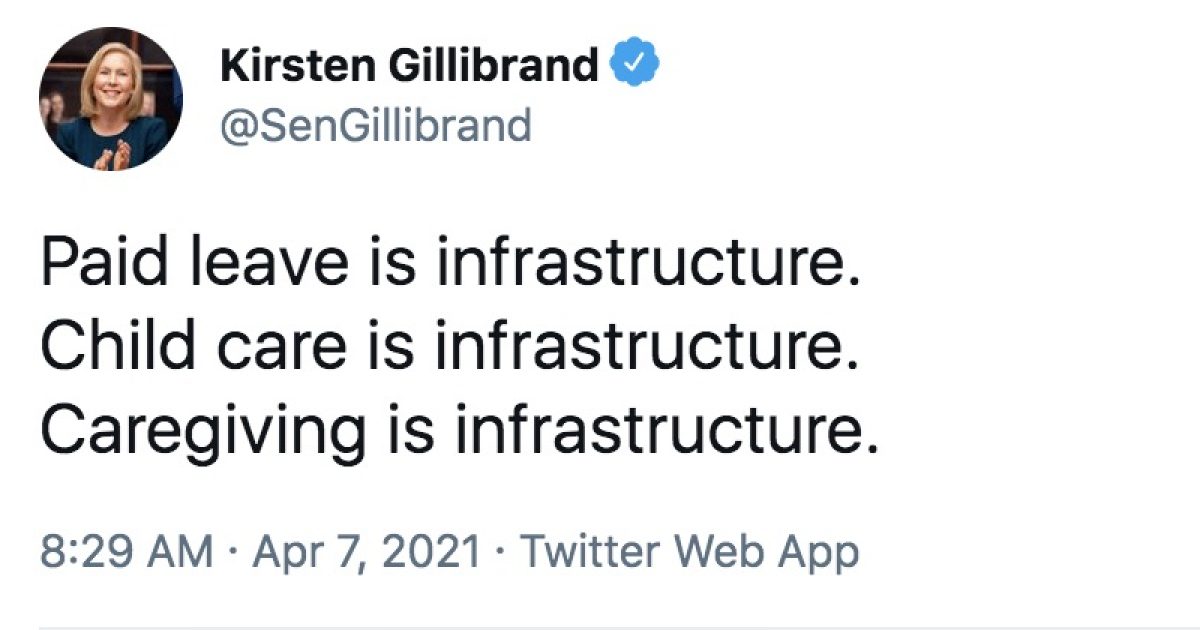 New York Democrat Senator Kirsten Gillibrand was immediately slammed by critics over her stretching the meaning of the word infrastructure.

Biden argued for expanding the definition of “infrastructure” on Wednesday, saying that the idea “has always evolved to meet the aspirations of the American people and their needs. And it is evolving again today.”

Of course, Biden and Gillibrand totally missed the mark about what exactly is considered infrastructure.

Infrastructure is generally defined as “basic physical and organizational structures and facilities,” such as buildings, roads and power supplies.

There was no shortage of criticism on social media where Gillibrand was mocked numerous times.

Changing the meaning of words is not clever, it’s deceiving and Lying to the American ppl in order to get your Socialist agenda passed.

I don’t think any of those things are infrastructure, but you know what is???

by this definition anything you want on a spending wishlist can be deemed infrastructure, which is, of course, the whole point of this messaging. https://t.co/T8HTmtgmEt

This time, they've got Senator Kirsten Gillibrand in their sights! pic.twitter.com/DRaHeXhhNN

Whatever the Left wants is infrastructure.

You know what’s not? Roads & bridges.

ONLY 5% OF BIDEN’s “INFRASTRUCTURE” BILL IS ROADS & BRIDGES. ?? https://t.co/jgP3ZEwGCy

Gillibrand was also criticized by the Left.

These are all vital needs. I would argue they are as important as nuts and bolts and grids and networks.

But when you drain a word of it’s meaning, you damage its impact, your cause, and the value of language. https://t.co/s3IGyzHKXr

It’s not surprising the Democrats’ wish list, from child care, elder care, and paid leave, has nothing to do with actual infrastructure projects but everything to do with their goal of advancing their radical political agenda including pork spending and pet projects.