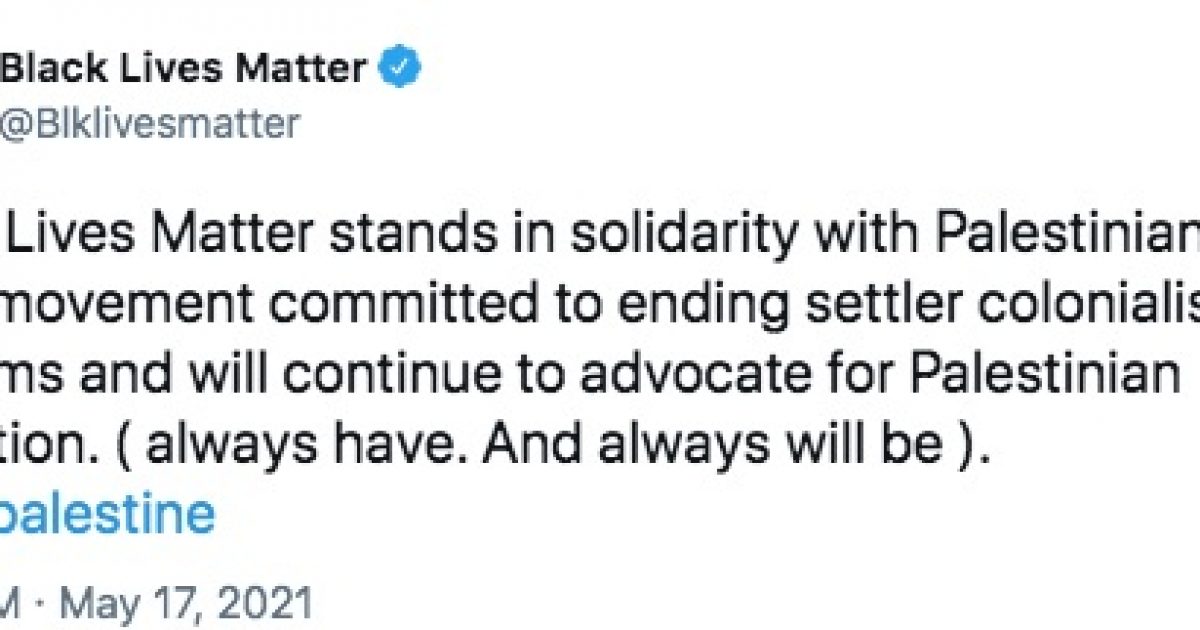 The leading Black Lives Matter organization declared “solidarity with Palestinians” Monday, a week after Hamas terrorists in Gaza began firing a relentless barrage of rockets into Israel, indiscriminately shelling civilian targets as well as dropping some missiles short and blowing up buildings within its territory.

Black Lives Matter stands in solidarity with Palestinians. We are a movement committed to ending settler colonialism in all forms and will continue to advocate for Palestinian liberation. ( always have. And always will be ). #freepalestine

Thank you for your solidarity. From Ferguson to Palestine, our struggles against racism, white supremacy and for a just world are united!

The BLM Tweet and supporting reply by the BDS movement did not mention it was Hamas – a terrorist group – that is initiating and maintaining the attacks against Israel.

The effort by Israel to stop the attacks by Hamas by returning fire generated support and sympathy for Palestinians from Democrats including Representative Alexandria Ocasio-Cortez (D-NY).

Ocasio-Cortez called Israel an “apartheid state” and responded to President Biden for saying Israel has the right to defend its citizens on the floor of the House of Representatives.

.@AOC in a speech on House floor: "This is not about both sides. This is about an imbalance of power." AOC adds: "The president stated that Israel has a right to self-defense… But do Palestinians have a right to survive?" pic.twitter.com/ybIwzINUvk

Israel is doing its best to not only defend its citizens but also by calling out Hamas for using Palestinians as human shields.

Hamas bases its military and weapons in the middle of civilian areas making it impossible for Israel to respond without inadvertently hitting civilians.

Opponents of Israel use the civilian casualties as a launching pad to promote their anti-Israel bias.

The fact remains that Hamas, not Israel, is responsible for the tragic loss of life on both sides.

BLM is not interested in the truth but as a Marxist organization its mission is activism via propaganda.