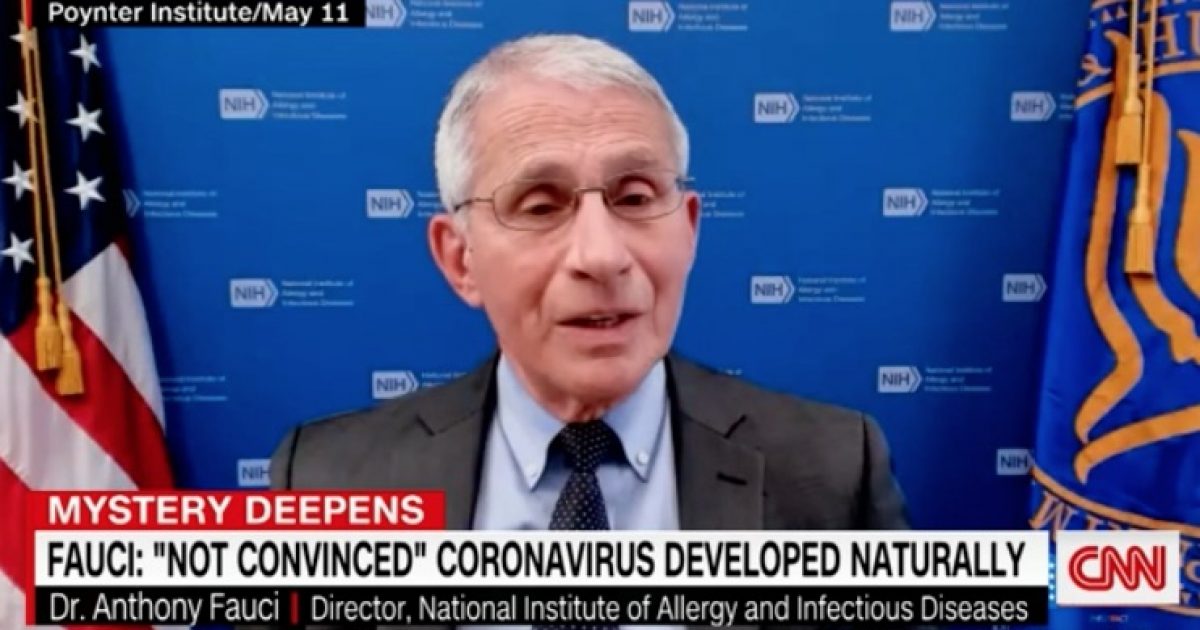 Dr. Anthony Fauci is taking heat on his recent flip-flop over the origins of the coronavirus.

However, during an interview at the fact-checker PolitiFact event called United Facts of America: A Festival of Fact-Checking, Fauci reversed his initial assertion that the virus was of natural origin and expressed the need to investigate the possibility that COVID-19 was from the Wuhan Institute of Virology Laboratory in China.

Responding to a question on whether he was still confident the virus came from nature, Fauci said he was “not convinced about that.”

‘No actually,’ he replied. ‘I am not convinced about that, I think we should continue to investigate what went on in China until we continue to find out to the best of our ability what happened.’

Now, there is far more media coverage on the possibility the virus leaked from the lab and a Wall Street Journal exclusive cited sick staff members in the Wuhan lab prior to the pandemic.

Three Wuhan Institute of Virology researchers became sick enough in November 2019 that they sought hospital care, according to a U.S. intelligence report that could add to calls for a fuller probe of whether the Covid-19 virus may have escaped from the lab https://t.co/kzvVbFQZDf

Tucker Carlson reacted Monday to revelations that suggest the COVID-19 virus may have originated from a lab in Wuhan, a theory that had been dismissed by the media and so-called health experts dating back more than a year. https://t.co/vPykB4TUwD

“US elites degenerate further in morality, and Fauci is one of them,” was the headline of an opinion piece by the outlet’s editor-in-chief, Hu Xijin, this week.

Earlier this year, former CDC Director Robert Redfield said he believed the virus originated in a lab in China.

Former CDC Director Dr. Robert Redfield to @NewDay (@CNN):
"I still think the most likely aetiology of this pathogen in Wuhan was from a laboratory. You know: escaped. Other people don't believe that. That's fine. Science will eventually figure it out" pic.twitter.com/T7SwRMsREM

Then again, it's Tuesday. It was about time for a position reversal. https://t.co/R12Vdy5nkR

Dr. Fauci says #coronavirus might have come from that lab in Wuhan after all… which marks the first time I believe him in 15-months. @newsmax

The corporate media just got caught doing a U-Turn on item #1. There's a long way to go.

Fauci’s credibility is beyond questionable over his handling of the pandemic and now it includes his flip-flopping over the origins of the virus.