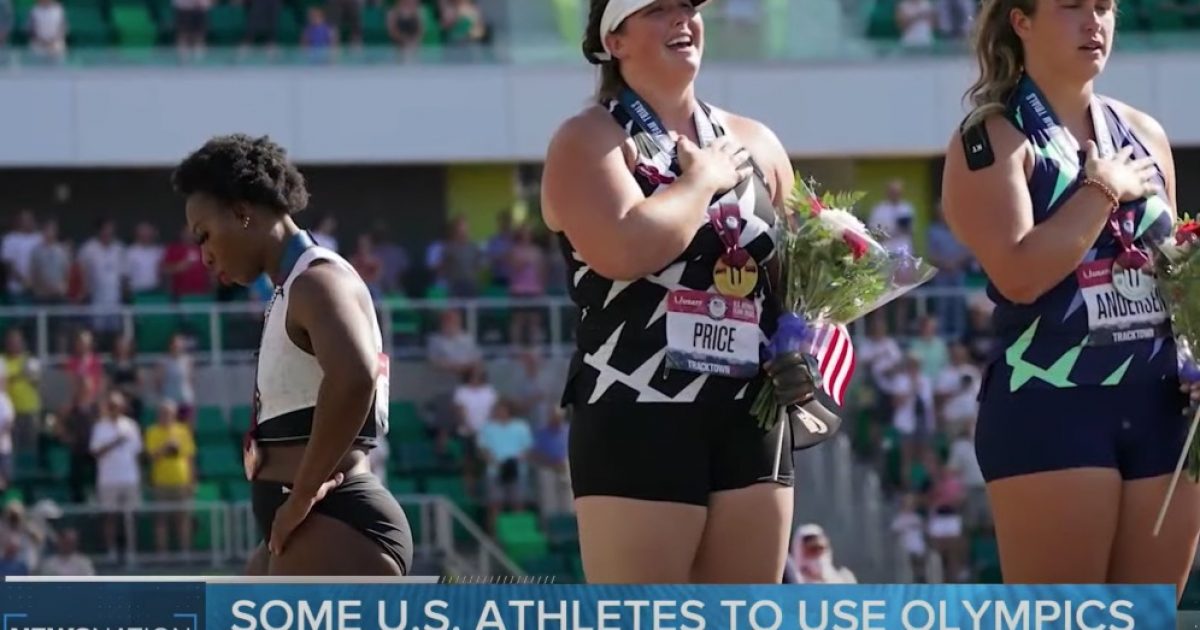 U.S. Olympic athlete hammer thrower Gwen Berry turned her back on the American flag during the National Anthem to receive her bronze medal at the Olympic track and field trials.

While the music played, Berry placed her left hand on her hip and shuffled her feet. She took a quarter turn, so she was facing the stands, not the flag. Toward the end, she plucked up her black T-shirt with the words “Activist Athlete” emblazoned on the front, and draped it over her head.

Sports are now all about trashing America and pushing a woke agenda. https://t.co/htOVhFVrOF

The Gold and silver medalists, DeAnna Price and Brooke Andersen, were on the platform with their hands over their hearts facing the flag.

While Berry claims she was “set-up,” a USA Track and Field spokesperson refuted the accusation.

“The national anthem was scheduled to play at 5:20 p.m. today,” said spokeswoman Susan Hazzard. “We didn’t wait until the athletes were on the podium for the hammer throw awards. The national anthem is played every day according to a previously published schedule.”

Texas Republican Representative Dan Crenshaw called for Berry to be removed from the Olympic team.

Dan Crenshaw calls for Gwen Berry to be removed from the Olympic team because she turned away from the flag pic.twitter.com/c2xWKLXPPJ

Ignorant and stupid. I hope she gets crushed at the Olympics. https://t.co/2xJABTYgy0

If Gwen Berry threw that hammer like she throws shade, maybe she woulda come in first.

she would have taken first place.

If you can’t respect our flag or anthem, then you shouldn’t represent this country. It’s that simple.

Hammer thrower Gwen Berry turns away from flag while anthem plays at trials – 'I feel like it was a setup' https://t.co/fXtLCNbrOT

Berry is there to represent the United States, not herself, and turning her back on the American flag in protest over the National Anthem is shameful and disrespectful.

Unfortunately, pictures and videos of her protest will likely be used by our adversaries to promote anti-American propaganda.