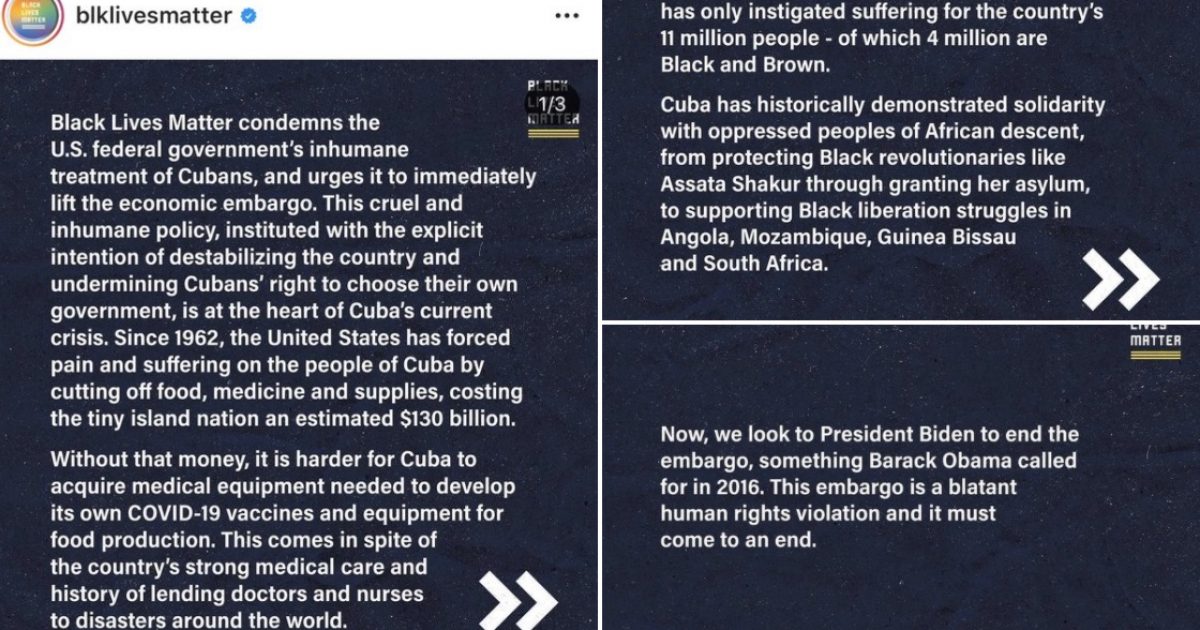 Black Lives Matter issued a statement on social media defending the Cuban regime while blaming America over the protests in the streets.

Cubans took to the streets to protest against their communist government, however, Black Lives Matter praised the communist regime and demanded the U.S. end sanctions against Cuba saying it’s a “cruel and inhumane policy.”

Black Lives Matter has released a statement on Cuba: pic.twitter.com/NgnT1o1oZE

The tweet accused the United States of causing instability in the island nation due to the longtime embargo and credited the Cuban government with granting “Black revolutionaries” asylum.

.@SecBlinken instead of asking the @UN to come here & tell us how “racist” America is, why don’t you ask them to go to #Cuba where an evil socialist regime storms into peoples homes,beats the crap out of them & then drags them away?#SOSCubaLibre https://t.co/sTEmsvDT8L pic.twitter.com/7hSYPCZK0s

The risk of a massacre in #Cuba, not half a world away, but only 90 miles south of Key West is real & growing#SOSCuba #PatriaYVida pic.twitter.com/TdvDMJBaNk

It’s been 72 hours since protests started

The situation is spiraling out of control.

We need to act NOW! pic.twitter.com/Sf9KXKJACF

Rubio also slammed the media for distorting the reason for the Cuban protests.

So many of these national media outlets are such shameless liars https://t.co/oQ0vKQCKz4

Former White House Director of Strategic Communications Mercedes Schlapp passionately talked about her father who was imprisoned under Fidel Castro.

Jen Psaki should stop taking her talking points from Castro-loving Bernie Sanders and listen to a Cuban American leader about the horrors of communism. @mercedesschlapp pic.twitter.com/Zsf4p4DTKp

They will always choose the oppressor, the basis of their movement is to bring Cuban style government to the US. The BLM moniker is a cynical veneer.

ICYMI: #BlackLivesMatter released a statement supporting Cuba’s brutal communist regime, and lied about why the Cuban people are revolting.

These are the Marxist domestic terrorists that every Democrat supports. Never forget that. pic.twitter.com/3lYILjkUC7

All of us who see through the propaganda know why BLM would say that.
Their mission is to divide and perpetuate racism. pic.twitter.com/ml8GePgAvl

Black Lives Matter is on the wrong side of freedom.

Of course, that is not surprising given its founder believed in Marxism.

Based on their words and actions, Black Lives Matter doesn’t really support black lives because its activism is directed at black lives when they are taken by a white police officer.

With their defense of the Cuban regime over the citizens, Black Lives Matter doesn’t care about freedom-loving Cubans either.