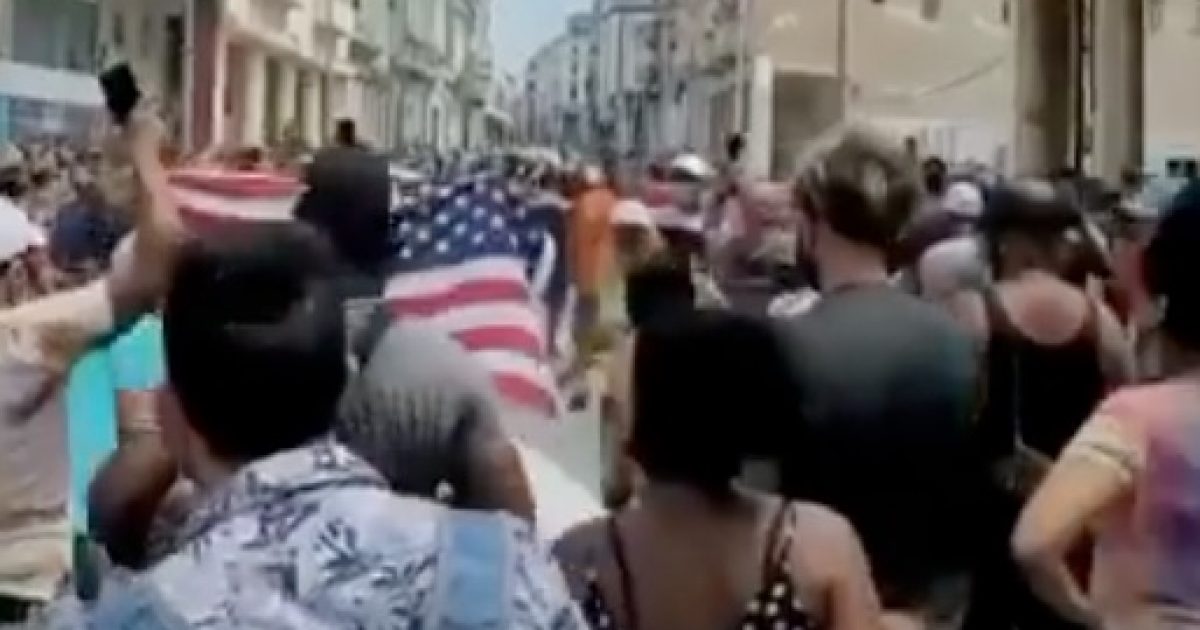 Democrats are doing all they can to diminish the enormity of thousands of Cubans protesting in the streets over the weekend against their communist government.

Cuban protesters chanted “we are not afraid,” pushing back against the communist dictatorship.

Anti-government protests broke out Sunday in Cuba demanding freedom and calling on the disbandment of the country’s communist dictatorship, all while some of the U.S.’s most outspoken, self-professed Democratic socialists appear to be in lockstep by not acknowledging the historic events unfolding on the island about 90 miles from Florida.

The network reached out to Democrat politicians to comment about the protests, including, “Reps. Ilhan Omar, Alexandria Ocasio-Cortez, Rashida Tlaib and Sen. Bernie Sanders and has yet to receive a response from any of them.”

This is deeply moving.

Watch as Cubans wave the American flag while marching against the island’s 62 year-old communist dictatorship on the streets of Havana.

Never forget what America represents to millions across the world. #SOSCuba?? #PatriaYVida
pic.twitter.com/rbEZmL7YgB

JUST IN – Mass protests erupt in several cities in #Cuba over the poor state of the socialized medical system. Protesters demand freedom from communist dictatorship.pic.twitter.com/NOSdVgP0By

Cuban Protestors outside of the Communist Party headquarters chant "Cuba isn't yours!"
pic.twitter.com/QzrqFI7Wn6

Peaceful protests are growing in #Cuba as the Cuban people exercise their right to peaceful assembly to express concern about rising COVID cases/deaths & medicine shortages. We commend the numerous efforts of the Cuban people mobilizing donations to help neighbors in need.

Julie, the Cuban people do not have the right to peaceful assembly in Cuba. You are so clueless and have no understanding of how the Cuban communists rule. https://t.co/W3XOMsaXas

Wow, someone named Julie Chung is lying about communism at the U.S. State Dept. Whodathunkit?

You’re a liar. It’s about the evil of leftism there. They want, no they demand to be free. Cuba libre!

The people of Cuba and Venezuela here in America know: the protests in Cuba are a direct result of an oppressive socialist agenda… not about COVID.

Misery and socialism run on parallel tracts. Socialist Democrats may not realize it, but most Americans do.

Isn’t it ironic …. Democrats are pushing on American citizens what Cubans are trying to escape in Cuba.

Protestors in Cuba and Hong Kong seem to love the American flag more than some of our Olympic athletes.

Remember, the Cubans are not walking around with the Chinese, Russian or Iranian flag as they march for their freedoms.

Our flag symbolizes freedom all around the world & I will fight to ensure that it ALWAYS stays that way.

Democrats are desperately trying to ignore and diminish the reality of Cubans protesting against their communist government.

The failed state of Cuba shows the adverse consequences of government control but that is an inconvenient truth for Democrats who are pushing for more and more government.

Let’s hope Americans can connect the dot between where Cuba is now and where Democrats want to take the U.S.