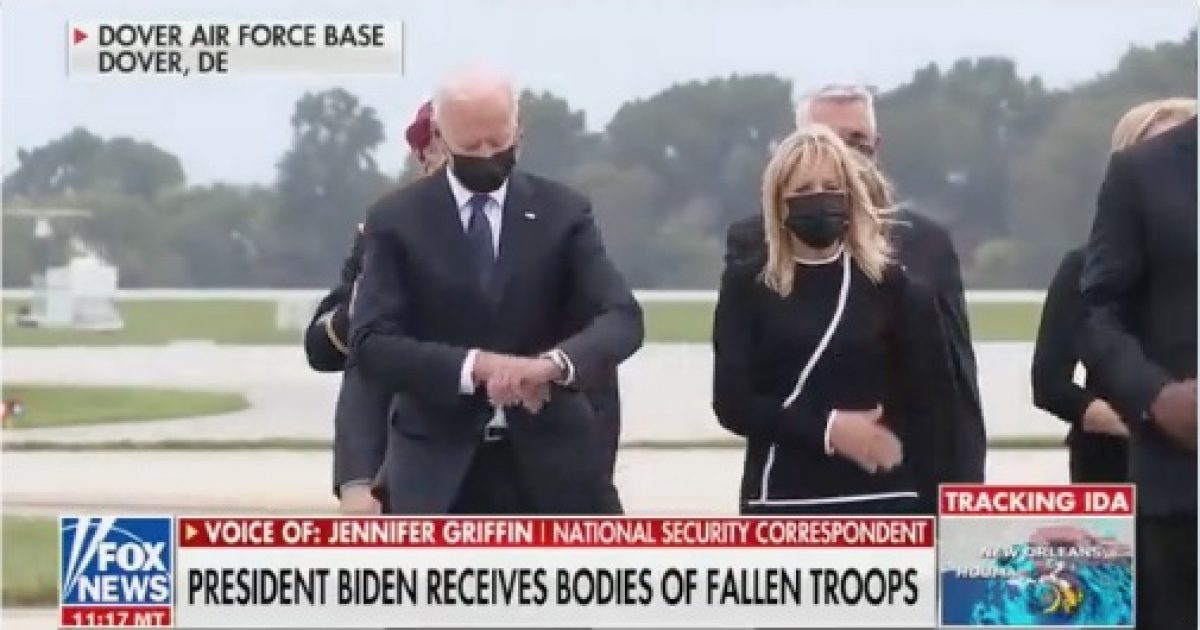 President Biden got slammed for looking at his watch during the ceremony at Dover Air Force Base in Delaware for the 13 U.S. military members who were killed in a suicide bomber attack at the Kabul airport.

Over the weekend at Dover Air Force Base, Biden watched the “dignified transfer” of the remains of the killed service members and also met the families of those killed in action.

Joe Biden checks his watch after a salute honoring the 13 US soldiers killed in ISIS-K Kabul attack https://t.co/1yqdLxvwOl

Multiple news outlets reported on Biden’s movement at the ceremony.

President Biden appeared to check his watch during a ceremony honoring the 13 U.S. service members who died in the suicide bombing in Kabul, Afghanistan, sparking backlash. Some even compared it to late President George H.W. Bush's infamous 1992 moment. https://t.co/tyqxm7W7Ta pic.twitter.com/1vFLklacfQ

Joe Biden had one job yesterday:

Respectfully receive the bodies of dead warriors that perished under his command.

Here’s what he did instead. pic.twitter.com/kQB8kyAdZS

He did not "apparently" glance – he did glance at his watch – @JoeBiden could care less about the warriors whos deaths he is responsible for…he had more important things to do than honor them… https://t.co/nULxCBRj8S

Biden was also criticized for refusing to answer a question about Afghanistan during a FEMA briefing about Hurricane Ida.

Video of Biden at the FEMA briefing:

Around 6:18 in the video, Biden says he was not directed to take questions but he decided to take a question.

Biden took a question but it was on Afghanistan so he declined to answer and just walked away.

The president ignoring the question was also captured on Twitter.

President Biden: "I'm not supposed to take any questions but go ahead."

This is not the first time Biden refused to address a question about Afghanistan.

Overall, it was a bad weekend for Biden.

First, he looked at his watch during a somber ceremony at Dover Air Force Base and then he followed that by ducking a question about Afghanistan.

All of these points add to the conclusion that Biden is not up to being president.