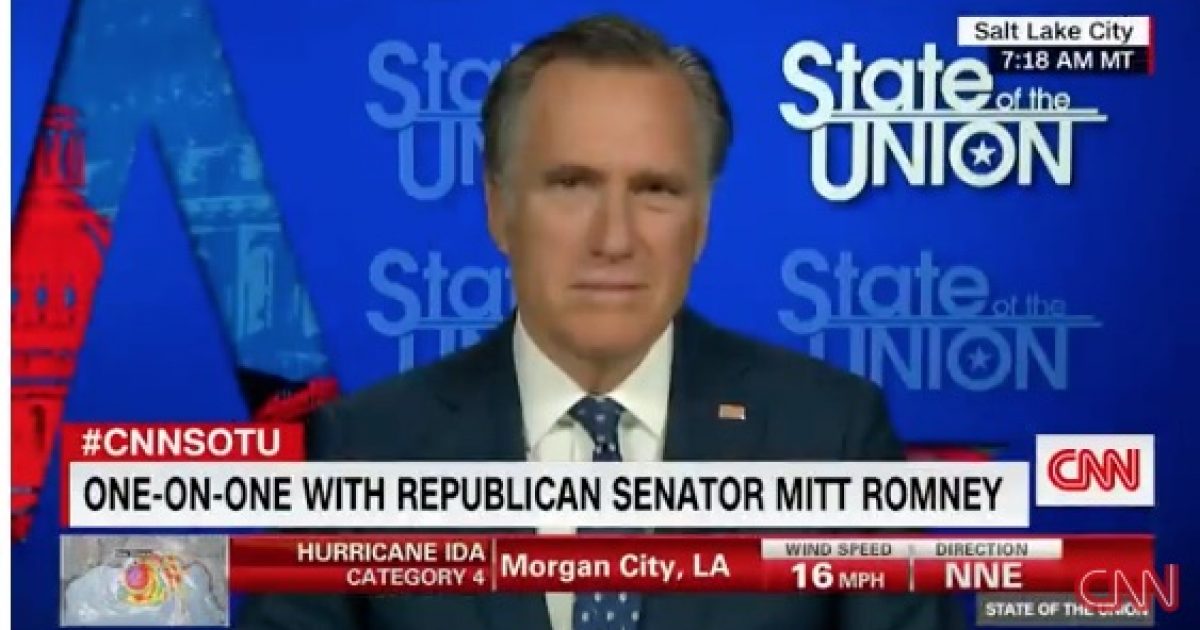 During his interview on CNN’s State of the Union with host Jake Tapper, Romney appeared to apply equal blame to both Trump and Biden.

Romney said, “If you focus on what we should do right now, recognize we’re in the position we’re in right now is because of terrible decisions made by two administrations.”

“This is the result of very ineffective decisions by the prior administration and the current administration,” Republican Sen. Mitt Romney says about Afghanistan. https://t.co/iHxjlcp3Jc #CNNSOTU pic.twitter.com/JqCeRBAog5

The Senator was apparently pleased with his Afghanistan comments because he promoted his CNN interview on Twitter.

What's happening in Afghanistan is a humanitarian and foreign policy tragedy–both the current and prior administration have made terrible decisions. Leaving Americans and our Afghan partners behind would put upon the U.S. a great moral stain. pic.twitter.com/4zHu3l2DTL

The full interview was posted by CNN on YouTube.

After watching the full interview, it is clear Romney’s goal was to blame both administrations. Romney referred to the Trump and Biden administrations four times during the interview.

Romney also communicated his view that the U.S. needed to keep some troops in Afghanistan for national security reasons.

However, it was pointed out that back in 2012, when he was running for president against former President Obama, Romney wanted to pull the troops out of Afghanistan.

See transcript of Romney during the 2012 presidential debate below.

Here is the entire debate transcript.

Karl called the current situation in Afghanistan “a disaster.”

“The big question is, does Afghanistan once again become a safe haven for terrorist attacks on U.S. interests around the world or at home?” https://t.co/UmW0Nhz9Yw pic.twitter.com/Eqa7dy1X4j

One can argue whether or not keeping U.S. troops in Afghanistan is a good idea but it’s obvious Biden’s withdrawal plan is a complete disaster.

Romney could have hammered out that point but he wanted to use the crisis to take a few shots at Trump.

By diverting attention from Biden, Romney will only muddy the waters making it much harder to hold the current president accountable for his horrible decision-making.