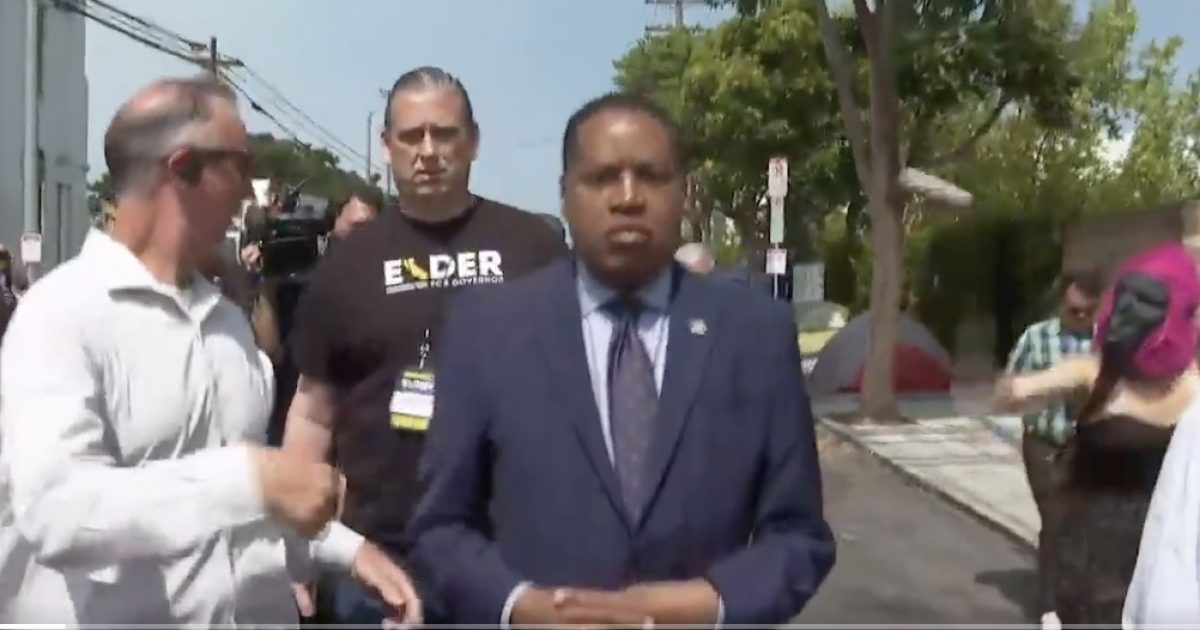 Elder was walking with his campaign staff in Venice when the woman threw an egg at him.

Another egg was thrown at Elder and his group.

Video of the incident was captured and distributed on Twitter.

The video shows one egg being thrown by the white woman wearing a gorilla mask and she also punched one of Elder’s security staff as he approached her.

Breaking: A flying egg narrowly missed the back of recall candidate @larryelder's head after it was thrown by an activist wearing a gorilla mask in Venice. A scuffle broke out and the candidate was escorted into an SUV.

Fox 11 reported on the incident including comments from Elder.

Democrat critics were quick to point out the similarities between the attack against blacks during the civil rights movement and yesterday’s attack on Elder.

The common denominator is Democrats.

I cannot believe that in 2021 @larryelder would be facing the same racist hate that Dr Martin Luther King fought so hard to get rid of. And of course it’s from DEMOCRATS ?

Democrats are racist. Always have been, and based on yesterday's barbaric behavior toward Larry Elder, they clearly always will be.

A white woman dressed as a gorilla threw an egg at Larry Elder today, accusing him not of being a “true black person.”

Others pointed out the different reactions to this incident to others.

The report of a "noose" (a/k/a pulley) in the garage of a NASCAR driver prompted a full FBI hate crimes investigation. Where's the FBI now?! https://t.co/UsIAQGhOf6

.@CNN
A white woman dressed in a gorilla suit threw an egg at Larry Elder.
You don't find this wrong.
What if she'd thrown it at Al Sharpton?
Imagine your month of screeching "Racism!"
Your asinine double standards are why no one of any political stripe respects you.

The attack against Elder is disgusting, reckless, and dangerous.

Since Elder is a conservative Republican, he can be attacked with none of the outrage that occurs when blacks claim they are targeted because of their race. The FBI was called in to investigate these so-called racial issues.

15 FBI agents were sent to look at a garage pulley in Bubba Wallace's garage… How many will be sent to investigate the chick who dressed like a gorilla and threw eggs at Larry Elder? 1 junior officer?

The FBI and media raved over the Jussie Smollett hoax more than a woman dressed in a black gorilla mask throwing an egg at Larry Elder.

The attack against Elder and his campaign expose the massive hypocrisy of Democrats and their allies in the media.

If a black Democrat politician was targeted by a white conservative it would be headline news.