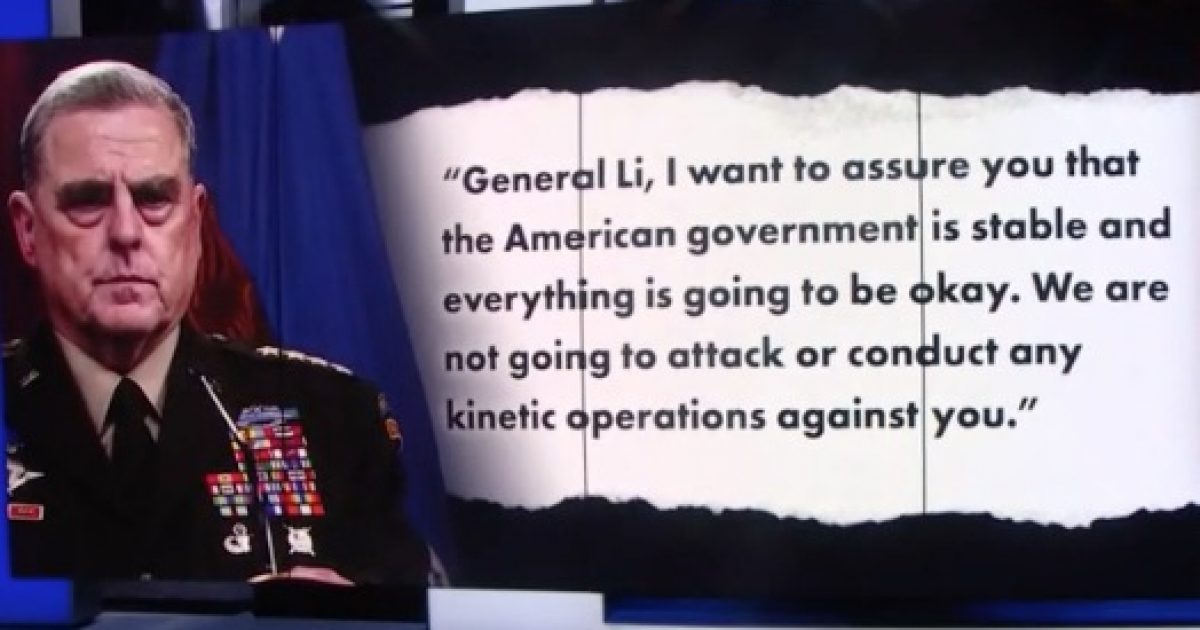 President Biden backed Chairman of the Joint Chiefs of Staff General Mark Milley following news the general spoke with a top Chinese military official during the late stages of the Trump administration.

Chairman of the Joint Chiefs of Staff Gen. Mark Milley placed two phone calls to his Chinese counterpart in the waning months of Donald Trump’s presidency to secretly reassure Beijing that the United States would not attack the country, a spokesman for Milley confirmed Wednesday.

Press Secretary Jen Psaki explained Biden’s confidence in Milley, saying, “And the president has complete confidence in his leadership, his patriotism and his fidelity to our Constitution.”

"The President has complete confidence in [Gen. Milley's] leadership, his patriotism, and his fidelity to our Constitution." pic.twitter.com/djInkcfdVu

Biden’s views were in response to information revealed in a new book written by Washington Post journalists Bob Woodward and Robert Costa where they wrote Milley called China’s General Li Zuocheng to assure the general the U.S. was not going to attack China.

CBS News reported on the statement from Milley’s spokesperson Colonel Dave Butler about the phone calls.

“His calls with the Chinese and others in October and January were in keeping with these duties and responsibilities conveying reassurance in order to maintain strategic stability,” Butler said in a written statement. “All calls from the chairman to his counterparts, including those reported, are staffed, coordinated and communicated with the Department of Defense and the interagency.”

BIDEN: "I have great confidence in General Milley" pic.twitter.com/WAj4vIKrtM

Despite the statement by Butler, former Acting Secretary of Defense Christopher Miller said he didn’t approve of the conversation.

Senator Marco Rubio (R-FL) expressed concern before it was verified Milley actually made the calls.

I hope reports of Gen. Milley reaching out to his Chinese counterpart to undermine a sitting President is proven false

It was an act of treachery that posed a grave risk to our security & our constitutional order pic.twitter.com/vvLE5gtN8j

Newsmax TV reported on calls for Milley to resign.

Increasing calls for Gen. Mark Milley to resign continues after he was reported promising to warn China if Trump took military action against them. @EmeraldRobinson. https://t.co/VlT7z8drtO pic.twitter.com/ssB802sauQ

Milley previously declared “China is not an enemy” during a security summit.

General Mark Milley rants that China is “not an enemy” during a national security summit (2015) pic.twitter.com/uFKBhWXnFS

It’s outrageous Milley made two secret phone calls to China and he should be fired.

However, Biden is backing Milley which sends a terrible message and precedent regarding the role of the military and the president.