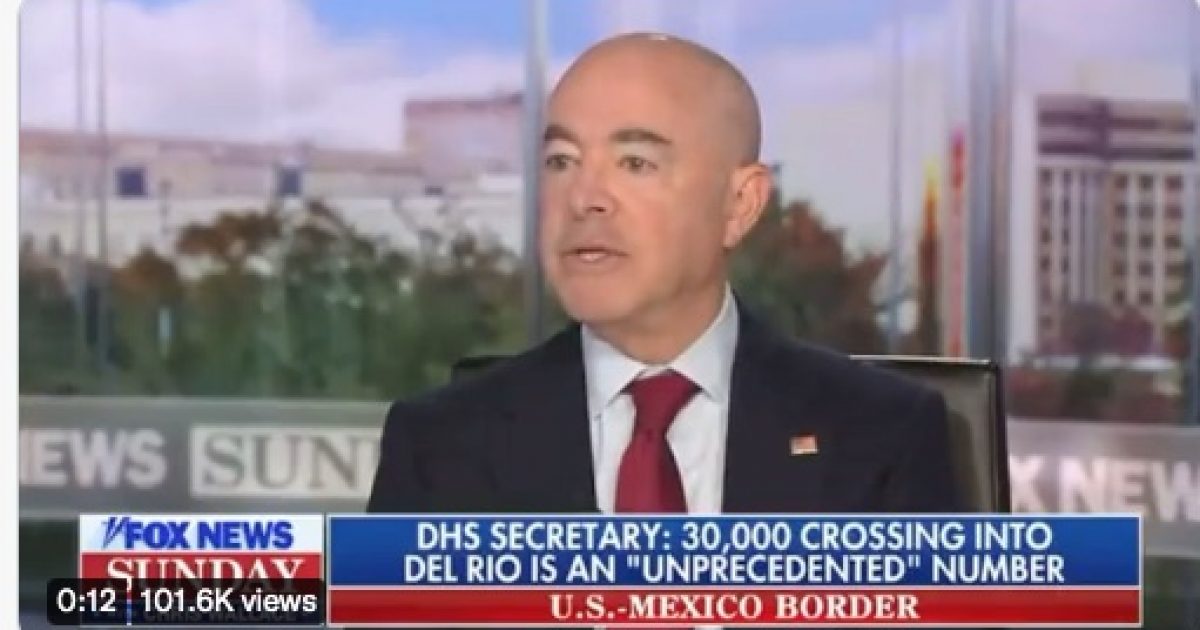 Department of Homeland Security Secretary Alejandro Mayorkas acknowledged over 12,000 Haitian migrants were released into the U.S.

Mayorkas admitted the number of Haitians could be higher during an interview on Fox News Sunday.

So far, approximately 12,400 of the people are having their cases heard by immigration judges, while another 5,000 are being processed by the Department of Homeland Security. Currently,, only 3,000 are in detention.

WATCH: DHS Secretary Mayorkas says up to 12,000 Haitian migrants have been released into the United States.

"It could be even higher." pic.twitter.com/1WOGS7LgPf

In addition, Mayorkas acknowledged the Haitians released into the U.S. were not tested for COVID-19 and they were not vaccinated even though the population is known to have a very low vaccination rate.

Mayorkas admits that 12,000+ Haitian illegal immigrants were released into the US from Del Rio. They were not subject to any vaccine or testing mandates. They were not tested before release. Haiti has a vax rate of less than 1%.
Mass catch & release continues under Biden admin.

DHS Sec. Mayorkas: We Did Not Test Haitian Migrants for COVID Before Releasing Them into U.S. pic.twitter.com/dbe2Va5CXo

Despite the huge surge of illegal migrants, Mayorkas said the Biden administration remains opposed to the construction of a border wall.

Mayorkas says Biden administration opposes the wall because people crossing illegally is “one of our proudest traditions” pic.twitter.com/d5C7tjhnkH

While Mayorkas claimed the border was not open, a Daily Caller reporter provided video evidence Mayorkas’ statement was inaccurate:

Reporting from Ciudad Acuna, Mexico where Haitian migrants cross the river to the Del Rio side back and worth passing supplies over. Never seen anything like this, DHS Secratary Mayorkas says the 'border is closed' but it doesn't look like it pic.twitter.com/4cJ0CjuXE0

The mass release of untested Haitian migrants conflicts with Mayorkas’s claim that illegal migrants are expelled because of public health reasons under Title 42.

Here's Mayorkas claiming that many migrants are deported under Title 42 via "removal proceedings."

As @BillFOXLA and many other journalists have pointed out, this is simply not true as these NTAs and NTRs allow migrants to go wherever they want in the U.S. and disappear. pic.twitter.com/8iAylzxlW9

Releasing over 12,000 illegal Haitians into the U.S. makes a mockery of Mayorkas’ claim the border is not open as well as undermining President Biden’s actions to combat SARS-CoV-2.

Uncontrolled migration is a major reason Biden’s approval rating is in free fall.