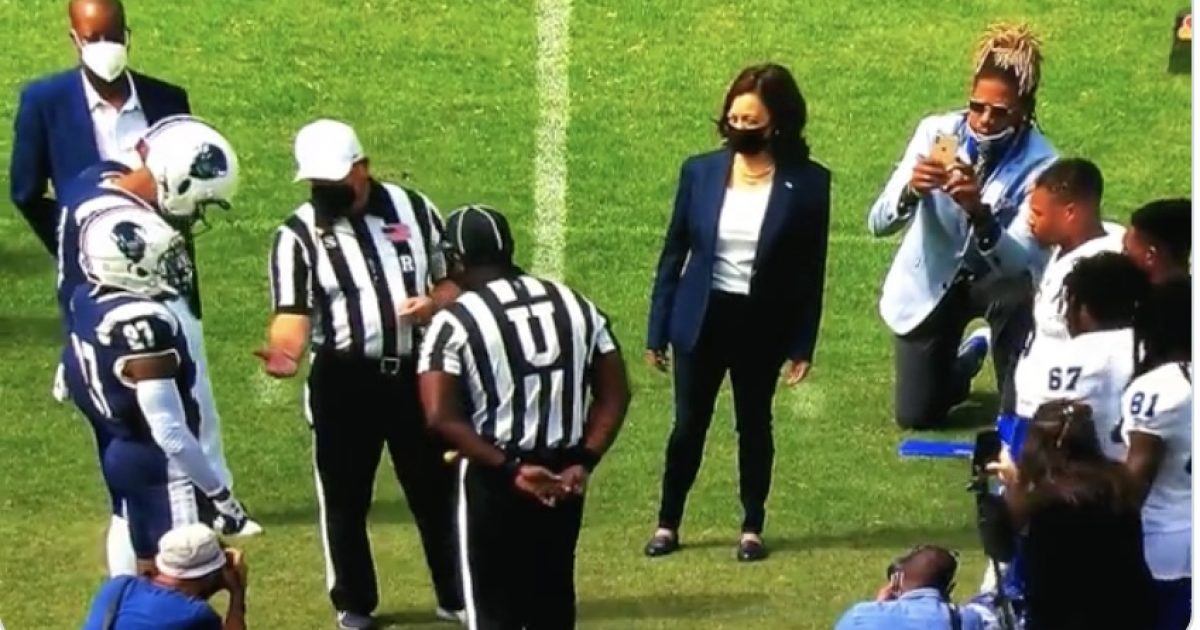 As more than 10,000 illegal migrants were gathered under the international bridge in Del Rio over the past few days, Harris ignored the crisis and instead had the honor of conducting the coin toss in the middle of Audi Field in Washington, DC.

.@VP starting her Saturday morning off right – flipping coin at the @HowardU and @_HamptonU football game!!

NEW: As of 7:15pm Del Rio time, here is what the situation under the international bridge looks like, where close to 15,000 migrants have camped out after crossing illegally. Many of the migrants have constructed makeshift shelters from sticks and plants. @FoxNews pic.twitter.com/i6tyPxSw25

Fox News reporter Bill Melugin reports on the number of illegal migrants walking across the Rio Grande River into the U.S.

BREAKING: I am absolutely stunned by what I’m witnessing right now. We are on a boat in the Rio Grande near the Del Rio international bridge and we are watching as masses of hundreds of migrants walk across the river from Mexico and stream into the US illegally. @FoxNews pic.twitter.com/xXE4pDkpIe

The Democrat mayor of Del Rio blasted Biden and Harris over the illegal migrant crisis.

Obama DHS Secretary Jeh Johnson: “We have to get control of our borders.” pic.twitter.com/NIKPwN2eup

Not expressing any concern about Del Rio, Harris promoted her attendance at the college football game.

It’s great to be back at The Mecca.

We all know who the real HU is pic.twitter.com/PaHUlk5miD

Earlier this year, Biden gave Harris the responsibility to address the crisis along the southern border.

Critics pointed out Biden and Harris are engaging in leisurely activities during the latest border crisis.

Utter insanity on the border while @POTUS is in Delaware and @VP is going to college football games https://t.co/6I8GCTwVus

A critic added a picture of Harris to a picture of the huge number of illegal migrants grouped together under the international bridge in Del Rio, Texas.

Can you flip a coin tonight at del rio to see who gets to sleep under the bridge tonight?? Great job Madam VP! pic.twitter.com/g7YSE8hhK8

President Biden took the weekend off by retreating to his beach house in Delaware.

In response to the Del Rio border crisis, the Biden administration is promising to initiate mass deportation efforts of Haitians in the U.S. illegally.

However, not all Democrats are on board with this strategy.

Over 50 Democrat lawmakers are demanding the Biden administration not to engage in deportation efforts.

The pictures and videos from Del Rio coupled with the hundreds of thousands of illegal migrants walking into the U.S. each month provide clear evidence Biden and Harris are ignoring the crisis at the southern border.