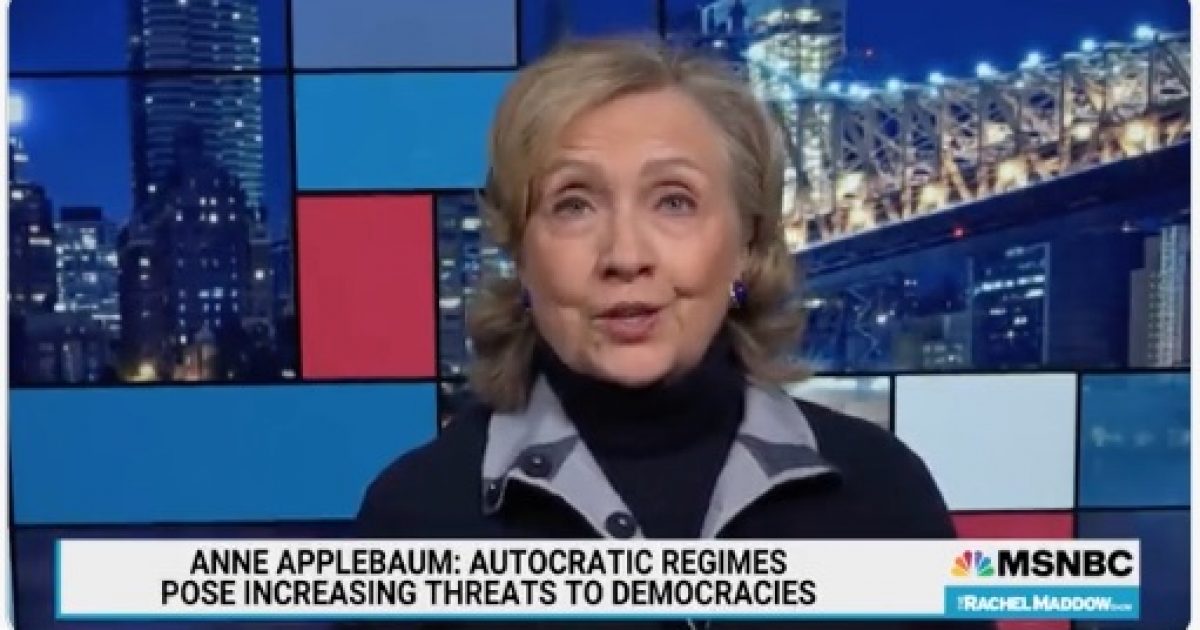 Clinton believes the recently passed infrastructure bill and the $1.9 trillion American Rescue Plan are evidence of his accomplishments.

She said Americans don’t realize those accomplishments because Republicans are twisting the facts about Biden’s achievements.

“Misinformation” and “propaganda” are the ways the public is being deceived according to Clinton.

"I do think that we are facing a crisis of democracy, crisis of legitimacy," Hillary Clinton says on threats to democracy. "The increasing ability to manipulate people through algorithms and other forms of artificial intelligence will only make this harder to combat." pic.twitter.com/QX5xR4I5Iu

Critics pounced on Clinton for her comments. While she pointed to legislative accomplishments, critics pointed out they are not helping Americans on Main Street.

Hillary Clinton seems to think Americans don’t appreciate Biden,s accomplishments. It tends to work that way when all your accomplishments have a negative impact on the people you supposedly represent! https://t.co/S4ZK630L1a

One critic thought Clinton was positioning herself to be appointed as vice president if current Vice President Kamala Harris leaves that post.

Clinton is sucking up in Joe’s hour of need. So the rumors are true, she’s got a placeholder in for the VP slot if Kamala leaves.

H: “Americans don’t appreciate Biden. I’m ready to help in any way I can.’
Would Hillary take a role? She didn’t rule it out. https://t.co/903QBeYxfx

The reality is Biden is doing a horrible job as president and Tom Borelli summed it up nicely during his interview on Newsmax TV.

Tom mentioned a number of failures by Biden led by a 30 year high on inflation and high gasoline prices.

He also reminded the viewers that Clinton is “immune” to inflation and she has a pattern of looking down on Americans.

"She's immune to inflation…It's typical for Clinton to carry out with this type of propaganda, but the evidence doesn't lie."@tomborelli,@iamshalabhkumar and Dino Scaros react to Hillary Clinton's comments about the American people. @Tom_Basile pic.twitter.com/cudxw0fsJW

Biden is a disaster and all the spinning from Clinton will not change the facts.