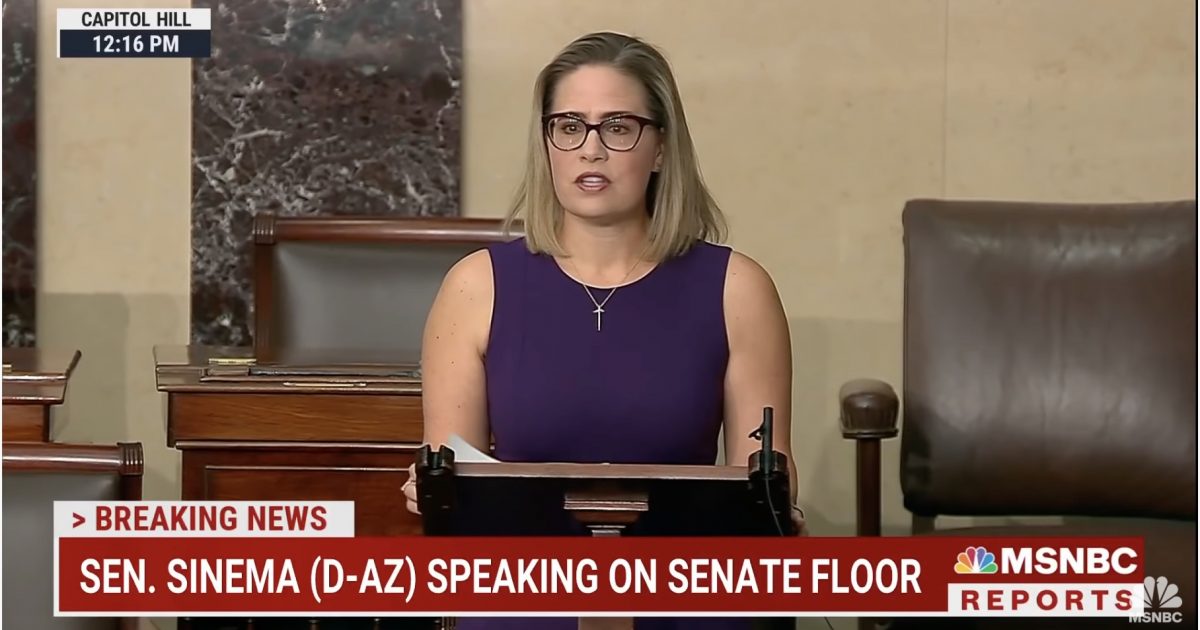 The liberal media and some Democrats are attacking Senator Kyrsten Sinema (D-AZ) for keeping the Senate filibuster because the Senate rule is holding up President Biden’s effort to federalize federal elections.

To date, Senators Sinema and Joe Manchin (D-WVA) are refusing to back an effort to remove the Senate filibuster which is the first step that could allow Democrats to push the “Freedom to Vote: John R. Lewis Act” with only 51 votes.

The Freedom to Vote Act would establish a set of rules for federal elections in every state.

Politico reports the bill would water down voter ID by allowing different documents to prove identity. For example, “… debit cards, utility bills or bank statements issued within six months of the election or ‘any other document’ with an individual’s name issued by federal, state, tribal or local governments.”

In addition, the bill would allow a “sworn written statement” to be used in stead of photo ID.

The bill would expand voting by allowing mail-in absentee voting for all voters and require states to use drop boxes.

Other elements of the bill include an early voting requirement and to allow same day voter registration.

The idea of federalizing election requirements has come under fire from Republicans because the bill would weaken election integrity.

MSNBC host Tiffany Cross said Sinema was “Upholding White Supremacy” by not getting rid of the filibuster.

"It is hard to think of a stupider thing that could be said about the 60-vote threshold," @Lawrence says about Sen. Sinema claiming the 60-vote threshold in the Senate for the filibuster is a "critical tool that we need to safeguard our democracy."https://t.co/P13S9ucfYX

Sen. Sinema is standing in the way of federal voting rights legislation by supporting the Jim Crow filibuster. That’s we are in Arizona today, demanding that she and Congress stand on the right side of history and eliminate the filibuster and #DeliverForVotingRights now. https://t.co/mL1DyXFw4J

Martin Luther King III also participated in a march to bring attention to the Freedom to Vote: John R. Lewis Act and to pressure Sinema.

.@SenatorSinema – Can you hear us?

End the filibuster and give us the ballot! #DeliverForVotingRights pic.twitter.com/9U5KFf8lGB

Sinema may also get challenged in a Democrat primary.

– Gallego doesn't rule out '24 primary against Sinema
– Calls her position on filibuster naive
– Says she hasn't had townhall in 3 years
– Says she's "really disappointing" voters
– Says she has "looser principles" with Wall Street
– "The only consistency … is inconsistency" pic.twitter.com/TQOZqlv7Xh

Biden went all out to push for the election law.

Will you choose democracy over autocracy?
Justice over injustice?
Will you defend our right to vote over enemies, foreign and domestic?

Or will you let a Senate rule end democracy?

The knives are out for Sinema ~ ~ @SenatorSinema a 'traitor' to John Lewis for supporting filibuster, New York Democrat @RepBowman says https://t.co/iHHKrVs86y pic.twitter.com/HENibIK3fn

On the Senate floor, Sinema said she supported voting rights reform but supported the filibuster.

Biden’s poll numbers are falling like a rock and Democrats are desperate.

Democrats are so worried about getting hammered in the midterm elections, they are set to change the election laws to keep power.

Sinema is being courageous for doing the right thing and Democrats are showing themselves as the bullies they are for power.