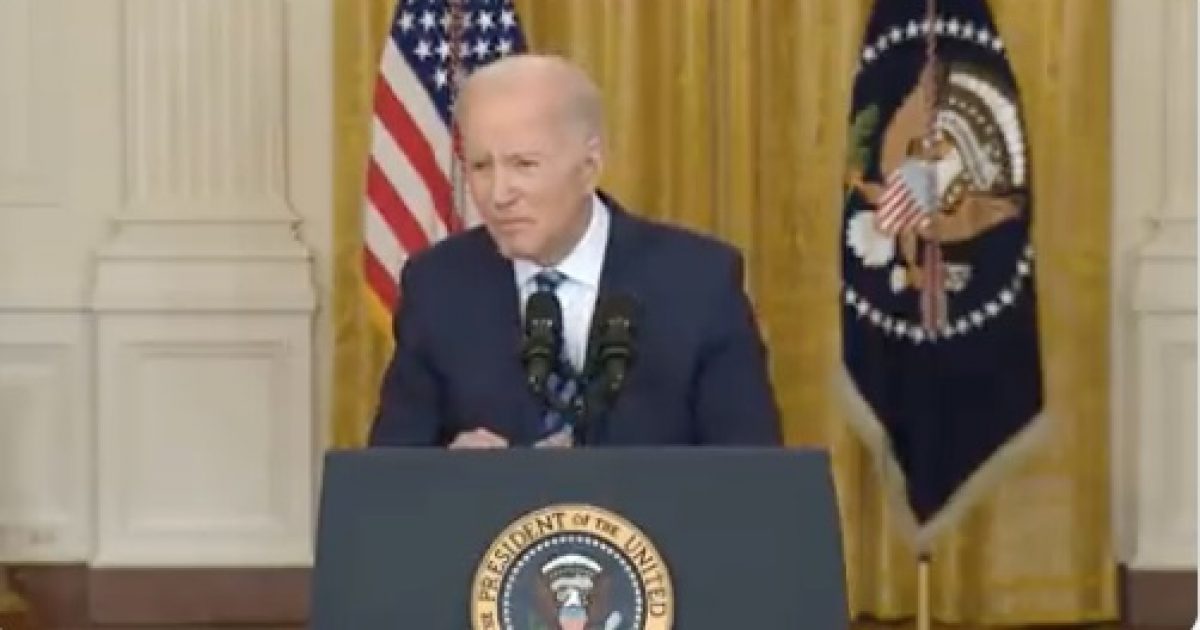 In fact, before those tanks were even idling on the border, President Biden signed a series of executive orders that prioritized addressing climate change across all levels of government and halted all new oil and natural gas leases on public lands. The order came in January of 2021 after he canceled construction permits for the Keystone XL Pipeline on his first day in office. And, he said, it was meant “to make it official that climate change will be at the center of our national security and foreign policy.”

A land war in Europe now calls into question the prudence of limiting U.S. domestic energy production as the U.S. bans Russian oil imports and must now go abroad in search of new supply. Biden knows as much, and the president went on the defensive Tuesday morning, seeking to blunt criticism recently sharpened by climbing gas.

He blamed Russia for starting a war. Then he blamed American energy companies for sitting on the sidelines of an international energy crisis.

“They have 9000 permits to drill now. They could be drilling right now, yesterday, last week, last year,” the president told reporters. “They are not using them for production now. That’s their decision.” And any criticism of his moves, he added, was out of bounds because “it is simply not true that my administration or policies are holding back domestic energy production.” For proof, Biden pointed to the fact that producers “pumped more oil” during his first year in office than “my predecessor’s first year.”

The oil and gas lobby in Washington has heard all these arguments already. The talking points are well-worn by now, and in recent weeks, White House Press Secretary Jen Psaki has even started to direct questions to that lobby. Is there anything the White House can do to boost domestic production, a reporter asked. “I’d encourage you to ask them that question,” Psaki replied, after scolding private business for not making the most of their drilling leases on public land.

The answer from that lobby: The White House either doesn’t understand how drilling works, or worse, they are being misleading. At least, so says Mike Sommers, chief executive officer of the American Petroleum Institute.

His industry is making the most of leased land, more so than at any time in the past, Sommers told Bloomberg News on Monday; they will continue to boost production to meet surging demand.

“There’s a fundamental misunderstanding of the administration as to how the process actually works,” Sommers said of the White House charge that the industry has left resources untapped. It takes more time than the administration is letting on, he added, because with a lease “there has to be a lot of development that occurs between the leasing and then ultimately permitting for that acreage to be productive.”

As he sees it, the administration is “purposefully misusing the facts here to advantage their position.”

One thing that all parties can agree on? Prices are already high, and they are about to get worse. Before Biden briefed reporters, the national average for a regular gallon of gas hit a new record of $4.17, surpassing the previous high of $4.11. According to AAA, that is a 72-cent increase from just a month ago and a $1.40 increase since last year.

American consumers seem prepared to stomach that increase, at least for a little while. According to new polling from Reuters/Ipsos, 80% of Americans believe that the U.S. shouldn’t buy oil from Russia. But Republicans note that prices were already climbing before Russia invaded, and they reject the latest White House claim that “this is a Putin spike at the gas pump.”

“Biden denies he had anything to do with it,” said Sen. John Barrasso, the ranking member on the Senate Energy and Natural Resource Committee, “now that America is facing an energy crisis.”

“The president can’t hide from his record,” the Wyoming Republican told RealClearPolitics before ticking off one by one how Biden nixed the Keystone pipeline, paused new oil and gas leasing permits, and named appointments to key government posts who are unfriendly to the industry. “America is the world’s energy superpower,” Barrasso added. “It’s time we started acting like it again.”

The White House insists that they are already operating from that position of strength. A senior Biden official told reporters before the president’s remarks that the reason the U.S. was able to sanction Russian oil was “because of our strong domestic energy production and infrastructure.”

“In fact, we’re a net exporter, the leading oil and gas producer in the world,” the official added. “And we produced more oil and gas in the first year of President Biden’s term than in his predecessor’s first year.”

Those numbers are statistically true, said Nick Loris, a vice president at the Conservative Coalition for Climate Solutions, “but they don’t tell the full story of how the administration has blocked further resource development.” The increases in production that Biden now heralds, according to Loris, are a result of renewed drilling in places beyond the administration’s control, such as the Permian Basin in Texas and the Bakken Formation in North Dakota. “In a lot of respects,” he said of Biden’s year-one oil boom, “this has been despite of the administration, certainly not because of it.”

The Biden administration has busied itself trying to find replacements for Russian oil, which makes up just under 10% of total U.S. imports. They have reached out to Venezuela, prompting an outcry from Republicans, including Sen. Marco Rubio, who accuse the White House of going hat-in-hand to petrol states already unfriendly to the U.S., and pleading with OPEC to boost production.

Biden enjoys solid bipartisan support on Capitol Hill for cutting off Russian oil imports, and yet, the GOP continues to attack the White House for high gas prices and for searching for new oil supply.

“Oil prices had already risen 60 percent before Putin’s invasion,” says Republican Study Committee Chairman Jim Banks, who introduced legislation to preemptively ban the import of Venezuelan oil. “So let me tell you, unless the Biden administration changes its tune at home, things are going to get a whole lot worse for American consumers and for the rest of the world.”

Searching for a glut of surplus oil abroad is an odd look for a Democratic party that made climate change the center of its policy agenda. Last October, for instance, California Rep. Ro Khanna asked Chevron CEO Michael Wirth if he was “embarrassed as an American company that your production is going up while European counterparts are going down?”

The Chevron CEO was not, in fact, embarrassed. If anything, five months later, the Biden administration would like oil companies to pump more oil on the public lands and waters that they have leased already. The president is not, however, abandoning his climate goals of an economy “run on electric vehicles powered by clean energy.” The pain at the pump that consumers now feel acutely, he said, “should motivate us to accelerate a transition to clean energy.”

Until that future arrives, the president seemed to shrug. Do you have a message for the American people about gas prices, reporters asked after Air Force One touched down in Texas. “They’re going to go up,” Biden replied. What can you do about it, the reporters pressed. “Can’t do much right now,” he said. “Russia is responsible.”
__________