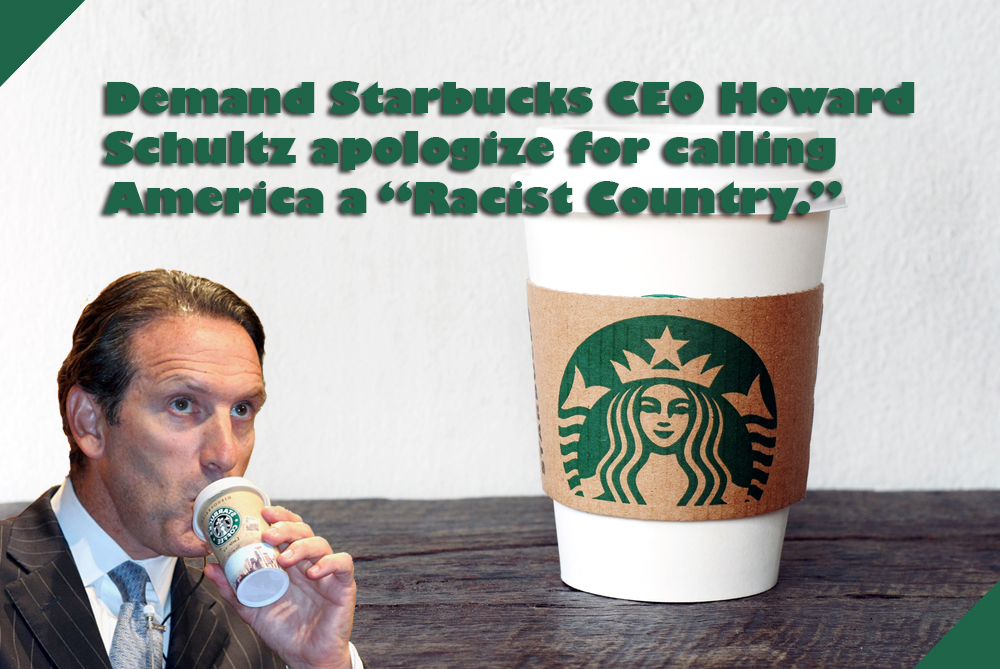 On March 18th, during an interview on CNBC, Starbucks CEO Howard Schultz described America as a racist country.

Schultz rattled off a number of cities – including Ferguson, Missouri — where police action resulted in blacks being killed and concluded these events are evidence that blacks are experiencing the same level of racism that occurred many decades ago.

Yes, homicide is the leading cause of death for young black men in the U.S., but around 90 percent of the perpetrators are also black. Around 98 percent of black shooting deaths do not involve police. In fact, a cop is six times more likely to be shot by someone black than the opposite.

Yet Schultz continues to parrot the propaganda served up by Al Sharpton and aided by President Obama and Attorney General Eric Holder, which is anything but an honest discussion of race relations in our nation.

Perhaps Schultz has forgotten our president is black, and was elected twice.

The attorney general at the Department of Justice is black, and when he steps down, his successor most likely will be black.

The head of Homeland Security is black.

The senior advisor to the president is black.

The ambassador to the United Nations and National Security Advisor is black.

We have a black Supreme Court justice (although he doesn’t count because he’s a conservative).

We had a black Secretary of State (ditto).

There may still be racists in this nation, but to say the nation is racist as a whole is an insult to the majority of Americans who conduct their business and relationships in a colorblind way – and up until now, drank coffee at Starbucks.

Howard Schultz must apologize for his statement. Sign this petition if you agree.

Note: By signing the petition, you agree to receive complementary newsletters from DeneenBorelli.com. You can unsubscribe at any time by clicking the unsubscribe link within the footer of her newsletter.