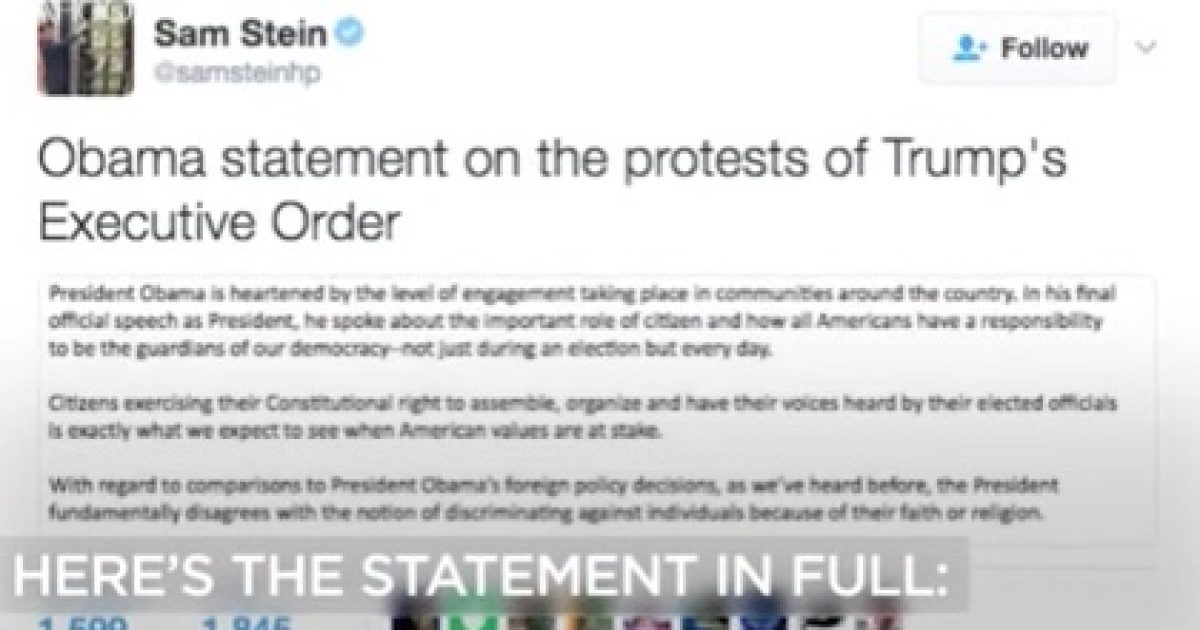 Just when you think former President Barack Obama was in retirement – think again.

Former President Obama “is heartened by the level of engagement taking place in communities around the country,” but he “fundamentally disagrees” with discrimination based on faith or religion, Obama spokesman Kevin Lewis said today.

President Trump signed an executive order on Friday calling for a suspension of immigration from seven Muslim-majority countries with ties to terror, including the suspension of the United States’ acceptance of Syrian refugees. That move was met by protests in airports and city streets nationwide.

“In his final official speech as President, he spoke about the important role of citizen and how all Americans have a responsibility to be the guardians of our democracy — not just during an election but every day,” Lewis said in a statement.

Trump’s refugee and the travel ban is not discrimination based on religion. Trump’s executive order focuses on the same seven countries that Obama’s Homeland Security Department targeted for extra scrutiny because of links to terrorism.

Trump brought up safe zones during phone calls with Saudi Arabia’s King Salman bin Abdul Aziz and Abu Dhabi’s crown prince, Sheikh Mohammed bin Zayed al-Nahyan, according to statements from the White House that make no mention who will fund the safe zones.

Following the call with Salman, the White House said in a statement: “The President requested and the King agreed to support safe zones in Syria and Yemen, as well as supporting other ideas to help the many refugees who are displaced by the ongoing conflicts.”

Salman’s office released a statement about the call that made no mention of safe zones.

The White House released a second statement following Trump’s call with Abu Dhabi’s crown prince that said: “The President also raised the idea of supporting safe zones for the refugees displaced by the conflict in the region, and the Crown Prince agreed to support this initiative.”

Trump is dealing with the Syrian refugees by working with countries to keep them safe while staying closer to home. Obama preferred to bring them to the U.S.

Missing the power and spotlight while watching Trump dismantle his legacy must be maddening to the former president.

As a community activist at heart, Obama couldn’t help himself and twisting of the truth is his specialty.