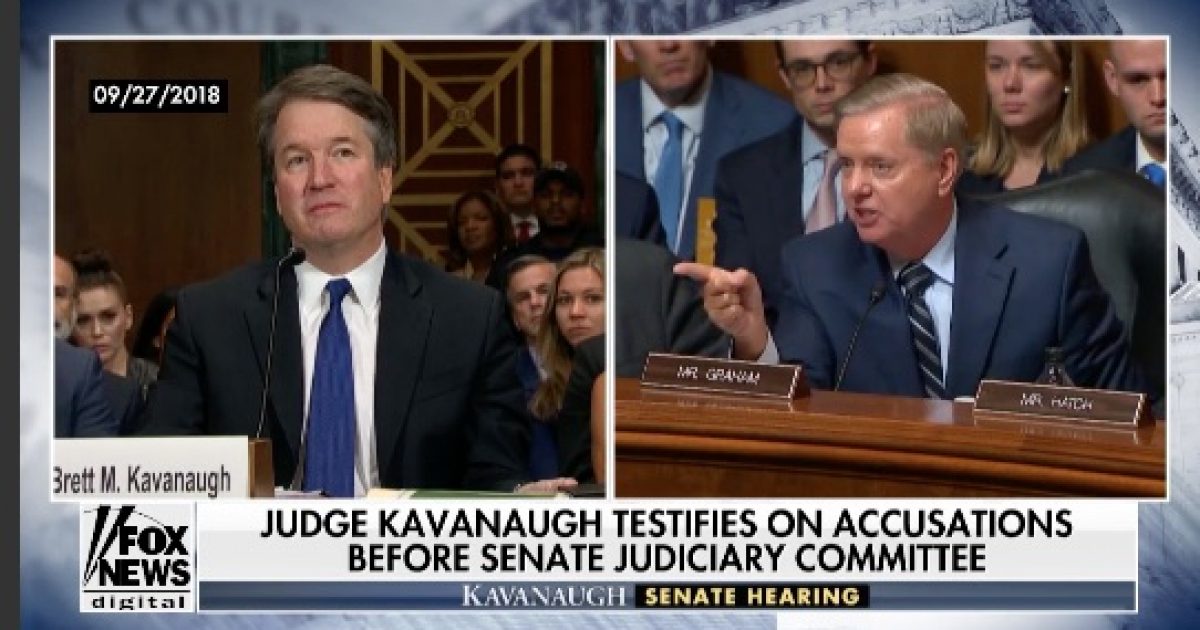 Judge Brett Kavanaugh fought back against the Democrats with a passionate defense of his character likely saving his confirmation to the Supreme Court.

Kavanaugh’s opening statement set the aggressive tone against the Democrats which he maintained throughout the hearing.

Kavanaugh let loose in his hearing appearance, abandoning much of his prepared remarks to blast the process as a “disgrace” and a “circus,” and later sparring with Democratic senators. The hearing ended Thursday evening after eight hours worth of testimony from Ford and Kavanaugh.

The Supreme Court nominee received a huge boost from South Carolina Republican Senator Lindsey Graham who delivered a decimating statement against the Democrats.

Graham, in a passionate statement, called out the Democrats for playing politics with the confirmation process.

“What you want to do is destroy this guy’s life, hold this seat open and hope you win in 2020,” Mr. Graham, red-faced and dropping all pretenses of legislative comity, yelled at his Democratic colleagues. “This is the most unethical sham since I’ve been in politics.”

With those words, Mr. Graham all but cemented a slow-motion public political transformation over the past two years — from an anti-Trump, maverick Republican senator who often sought legislative compromise to Mr. Trump’s closest ally and most ardent defender.

"This is the most unethical sham since I've been in politics… You all want power…I hope you never get it. I hope the American people can see through this sham, that you knew about it and you held it"- Senator @LindseyGrahamSC to committee #Democrats pic.twitter.com/U8VOGmeMyO

.@LindseyGrahamSC has more decency and courage than every Democrat member of the committee combined. God bless him.

Judge Kavanaugh showed America exactly why I nominated him. His testimony was powerful, honest, and riveting. Democrats’ search and destroy strategy is disgraceful and this process has been a total sham and effort to delay, obstruct, and resist. The Senate must vote!

The effort by Kavanaugh and Graham exposed the Democrats strategy of character assassination to block President Trump’s nomination to the Supreme Court.

The Democrats clearly overplayed their hand and it could negatively impact their prospects in the midterm elections.