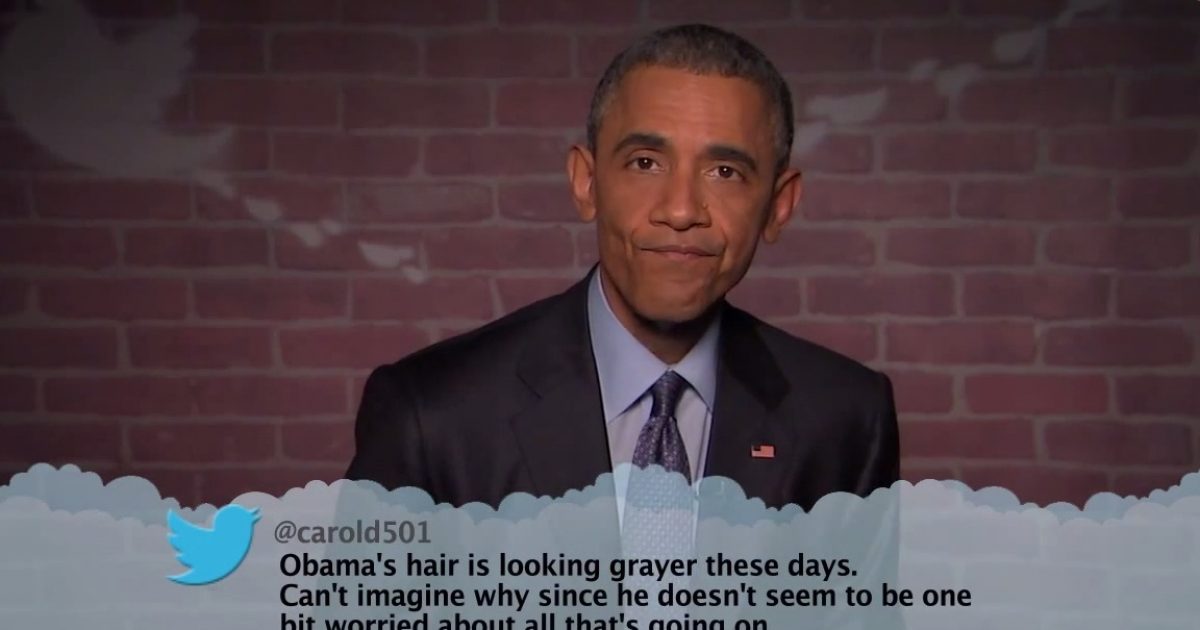 On Jimmy Kimmel Live!, in typical fashion, President Obama played it both ways regarding the social unrest in Ferguson, Missouri.

Commenting on the recent shooting of two police officers in Ferguson, Obama blended the justification for protests while making a critical statement about the shooting.

Kimmel’s question gave Obama a perfect opportunity to express outrage about the shooting of police officers and to correct the record about the false claim that Michael Brown was killed while trying to surrender.

Instead, Obama skillfully used the interview to manipulate the mob.

In Ferguson, two police officers were shot and thank goodness they’re at home now and they’re out of the hospital. And especially, you gave a beautiful speech in Selma last Saturday but in talking about these very subjects – about civil rights, the past, the present, the future of civil rights – does that make it especially painful for you when something like this happens?

Obviously we don’t yet know what happened. Our thoughts and prayers are with the officers and their families and thankfully, as you said, they’re going to be ok.

What was beautiful about Selma was reminding ourselves that real social change in this country so often has happened because ordinary people are willing in a nonviolent fashion to make their voices heard. And, you know, I think that what had been happening in Ferguson was oppressive and objectionable and was worthy of protest.

But there was no excuse for criminal acts and whoever fired those shots shouldn’t detract from the issue. They’re criminals, they need to be arrested and then what we need to do is to make sure that like-minded, good spirited people on both sides – law enforcement who have a terrifically tough job and people who understandably don’t want to be stopped and harassed just because of their race – that we’re able to work together to try to come up with some good answers. I put together a task force after the original Ferguson event had taken place that had police officers, police chiefs and some of the organizers of protests both in Ferguson and in New York – young people.

And they came up with some terrific recommendations and found that there’s a lot of common ground and what we have to make sure of is that the folks who disregard and disrespect the other side, people who resort to violence that they’re marginalized. And they’re not the majority and in the same way that you can’t generalize about police officers who do an extraordinarily tough job overwhelmingly they do it professionally, you can’t generalize about protestors who, it turns out, had some very legitimate grievances.

First, Mr. President we do know what happened: someone tried to kill two police officers. Period end of story. And as the top leader in the U.S., you should have condemned the shooting from the start with the strongest language possible without any equivocation.

Also, given the heightened social tension in Ferguson, it’s morally wrong and irresponsible to merge the right to protest with comments about the attempted police killings. Of course, the public has the right to protest but many of the protesters are operating under the wrong assumption about Brown’s death.

Cleverly, Obama interjected the recent Department of Justice report that found evidence of racism in Ferguson’s police department as the reason for protesting. Yet, the original social unrest was about Brown’s shooting. The DOJ report is giving Obama an opportunity to justify protests.

Moreover, Obama was in the perfect position to calm social tensions by emphasizing the Department of Justice investigation found officer Darren Wilson acted properly in the shooting of Michael Brown and the accusation that Brown was killed while trying to surrender with his hands up was a lie.

Obama’s statements on the entire Ferguson matter illustrates his real skills are in community organizing and mob manipulation.