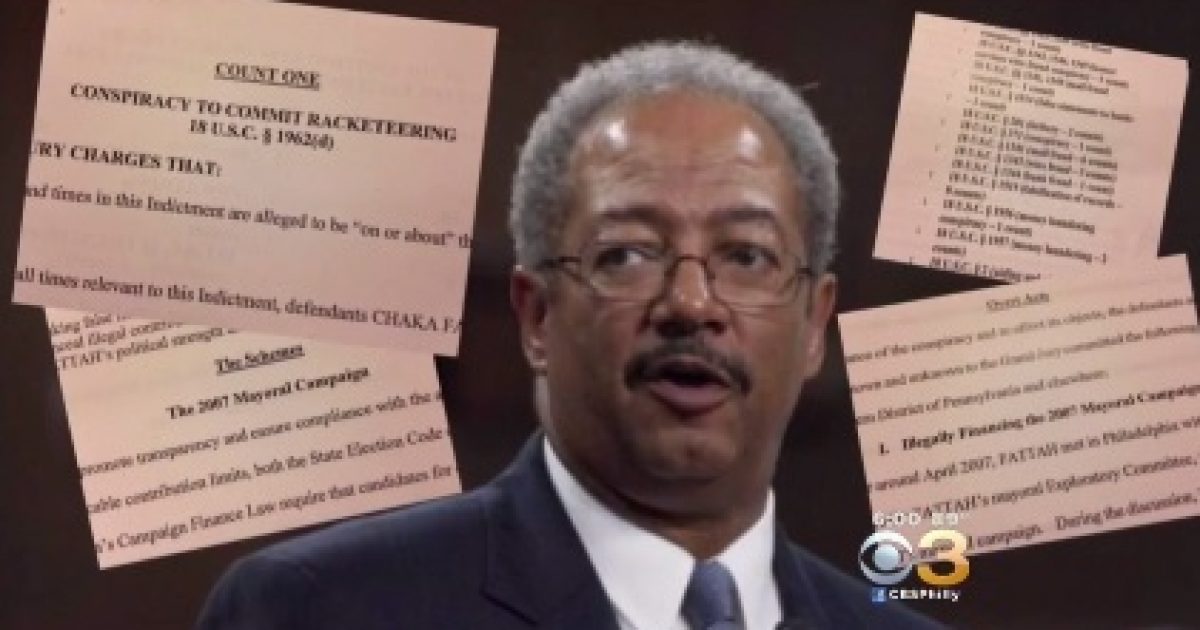 Oops. The second Democrat lawmaker this year has been charged with shameless corruption (the first being Democrat Senator Bob Menendez). This one involves a whopping 29-count indictment of Rep. Chaka Fattah and four of his alleged co-conspirators.

U.S. Rep. Chaka Fattah paid off an illegal $1 million campaign loan with federal grants and charitable donations, funneled campaign funds toward his son’s student loans and disguised a lobbyist’s bribe as payment for a Porsche his TV anchor wife never sold, prosecutors said Wednesday in announcing a racketeering indictment against him.

The 11-term Democrat from Philadelphia led a conspiracy that engaged in bribery, fraud, money laundering and other crimes and netted him hundreds of thousands of dollars, federal investigators said.

The indictment describes four schemes, two involving efforts to erase debts from Fattah’s failed 2007 mayoral bid. The U.S. Department of Justice charged that Fattah used federal grants and donations to his educational foundations to pay back part of the wealthy donor’s $1 million loan.

… Fattah vowed to remain in office and fight the charges but stepped down from his leadership post as the top Democrat on the House Appropriations subcommittee that oversees spending for Commerce, Justice, Science and related agencies.

It’s no wonder the American people have lost faith in their government. The halls of Congress are filled with petty criminals, and there seems to be no consequences or accountability to ensure that this kind of criminal activity won’t happen again.

Here’s the best part- Minority Leader Nancy Pelosi refuses to ask him to step down. Once again, Democrats are putting on their ethical blinders and pretending like the members of the party can do no wrong, so long as they keep voting in line to advance the progressive agenda.

She called [Fattah] “a tireless and effect advocate for America’s hard-working families.”

In other words: he might be a criminal, but he’s our criminal, so we are keeping him for his guaranteed vote in the whip count.

Say what you will about the Democrats, but at least their cognitive dissonance is consistent.