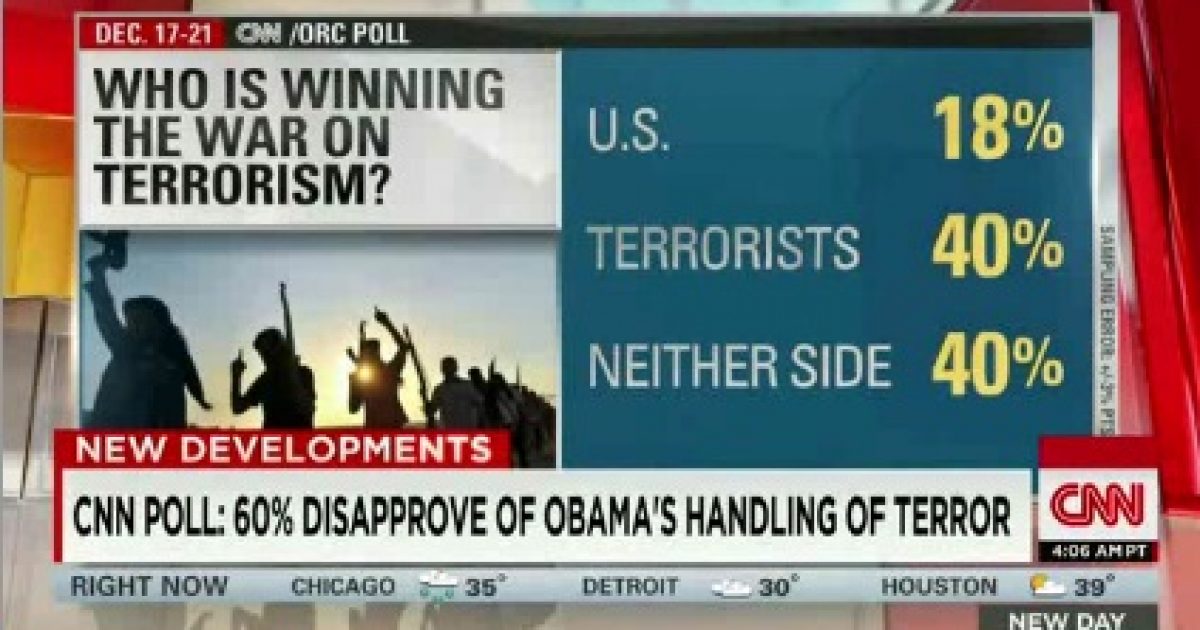 A new CNN poll reveals that a majority of Americans believe the United States is losing the war on terror.

Americans are more likely to say that terrorists are winning the war against the United States than they have been at any point since the September 11 attacks, according to a new CNN/ORC poll.

The public is broadly unhappy with the nation’s progress, with nearly three-quarters of Americans saying they are not satisfied with how the war on terror is proceeding. That figure, following terrorist attacks in Paris and San Bernardino, California, this fall, is well above the previous high of 61% who said they were dissatisfied in August 2007.

… Majority dissatisfaction with the war on terrorism crosses party lines, with even a majority of Democrats, 59%, expressing unease with the case prosecuted by the Obama White House. Seventy-nine percent of independents and 86% of Republicans also say they are dissatisfied with how it has fared.

It’s no surprise that confidence in our Commander-in-Chief is at an all time low. Obama has his head buried in the sand when it comes to the war on terror. He said ISIS was “contained” just 1 day before the Paris attacks. His aloof public response following the Paris attacks didn’t help either.

Even the hosts of MSNBC’s Morning Joe called Obama “disconnected from reality” when it comes to ISIS.

I think CNN anchor Jake Tapper captured the general attitude when it comes to Obama’s ability to protect America from ISIS during an interview with Rep. Adam Schiff (D-CA), when he said:

“So, contained, except for where they’re not contained.”