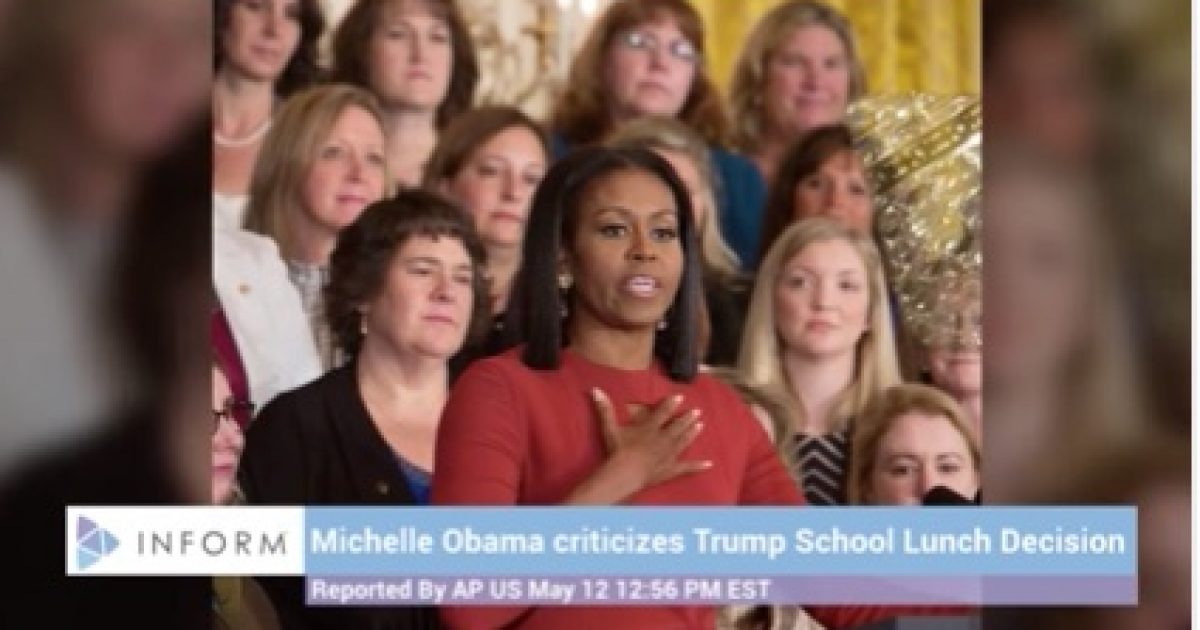 Michelle Obama, like her husband, is on the speaking circuit.

At a health conference, she blasted the Trump administration over changes to rules governing school meals.

The former first lady criticized the Trump administration on Friday for rolling back regulations that policed the healthiness of federally-subsidized school lunches. Among other things, the new rules relax restrictions on sodium content and allow schools to serve 1 percent flavored milk instead of forcing students to drink skim milk. (RELATED: Kentucky Students To Michelle Obama: Your Food ‘Tastes Like Vomit’)

“You have to stop and think, ‘Why don’t you want our kids to have good food at school? What is wrong with you and why is that a partisan issue? Why would that be political?’” Obama said at a health conference, referencing the Trump administration’s rule changes.

“Moms, think about this. I don’t care what state you live in. take me out of the equation, like me, don’t like me, but think about why someone is OK with your kids eating crap,” she continued.

Despite her claims, Obama’s effort to make school meals healthier was a marketplace failure generating negative news across the country.

The Washington Post reported about the backlash Obama received from her efforts to regulate school meals:

In Georgia, kids resisted the loss of their beloved fried chicken. In New Mexico, whole-wheat tortillas went straight to the trash can. And in Tennessee, after schools replaced familiar flaky white biscuits with a whole-grain variety, one official reported a “severe amount of rejection.”

What began as an effort led by first lady Michelle Obama to serve more-healthful food to American schoolchildren has turned into a clash of cultures across the country — and, now, a high-profile Washington lobbying battle.

Being a typical progressive, Obama knows what’s good for society and she was willing to use the force of government to make her will reality. What people actually think is irrelevant.