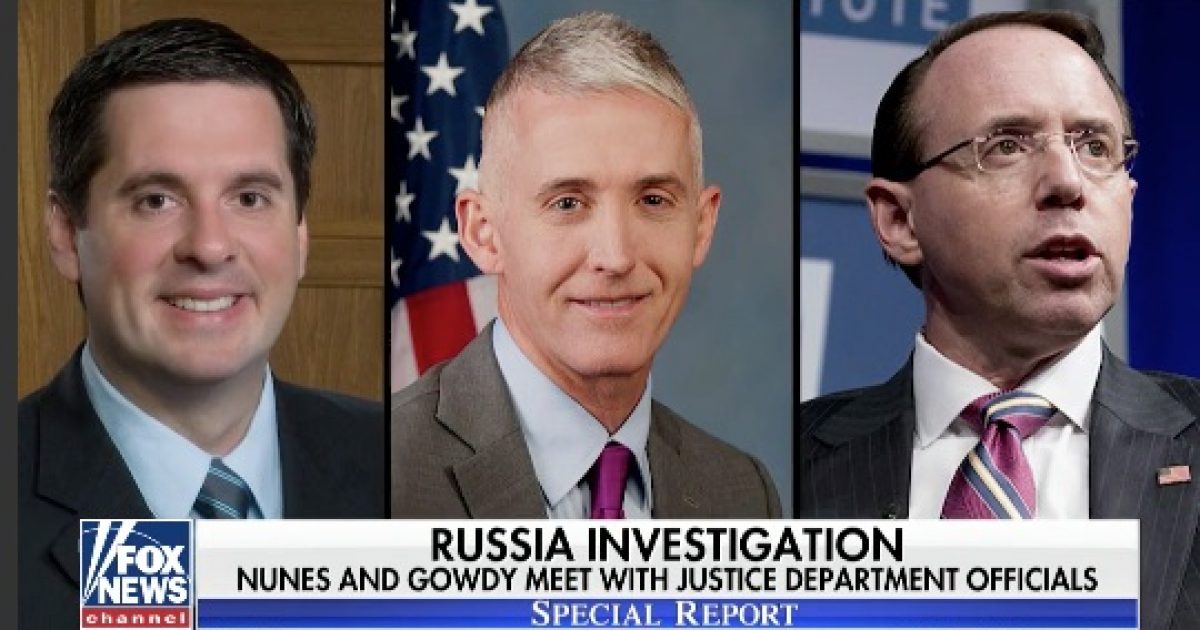 The Department of Justice (DOJ) is going all out to prevent Congress from finding out information on an individual that was involved with the FBI’s investigation of President Trump’s presidential campaign.

Responding to the threat, the DOJ met with Representatives Nunes and Gowdy yesterday.

Following the meeting, Nunes and Gowdy released a statement:

“We had a productive discussion today with officials from the Office of the Director of National Intelligence, Department of Justice, and FBI in which we raised questions related to information requested from the Intelligence Community. The officials committed to holding further discussions of these matters, and we look forward to continuing our dialogue next week to satisfy the Committee’s request.”

Judging by the statement, it appears the DOJ did not share the requested information with the Representatives.

The Wall Street Journal commentary writer Kim Strassel provides concerning details about the nature of the information that Nunes is seeking:

The bureau already has some explaining to do. Thanks to the Washington Post’s unnamed law-enforcement leakers, we know Mr. Nunes’s request deals with a “top secret intelligence source” of the FBI and CIA, who is a U.S. citizen and who was involved in the Russia collusion probe. When government agencies refer to sources, they mean people who appear to be average citizens but use their profession or contacts to spy for the agency. Ergo, we might take this to mean that the FBI secretly had a person on the payroll who used his or her non-FBI credentials to interact in some capacity with the Trump campaign.

This would amount to spying, and it is hugely disconcerting. It would also be a major escalation from the electronic surveillance we already knew about, which was bad enough. Obama political appointees rampantly “unmasked” Trump campaign officials to monitor their conversations, while the FBI played dirty with its surveillance warrant against Carter Page, failing to tell the Foreign Intelligence Surveillance Court that its supporting information came from the Hillary Clinton campaign. Now we find it may have also been rolling out human intelligence, John Le Carré style, to infiltrate the Trump campaign.

Clearly, if the FBI planted a spy in President Trump’s campaign, this would explain why the DOJ would try to hide this from the public.