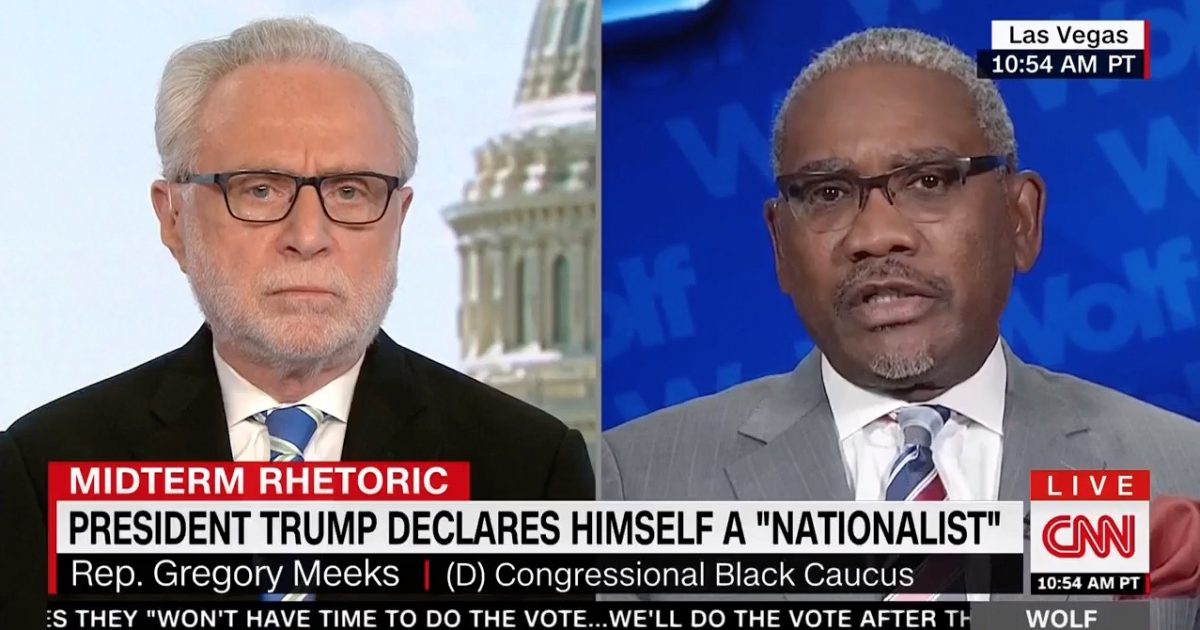 Meeks took offense to a remark President Trump made during his rally speech in Houston, Texas, where the president declared he was a “nationalist.”

Trump proclaimed himself a “nationalist” at a rally for Sen. Ted Cruz (R., Texas) on Monday, saying it’s an “old-fashioned” word. Trump slammed “globalists” while identifying himself with a term he’s often painted as by critics.

“It reminds me of the kinds of words that came from people like Hitler, who thought that in Germany he was a nationalist, and the kinds of people that this president seems to like, and those who are repressive dictators, those are the individuals that generally use that kind of phrase and those kinds of words,” Meeks said.

Let’s start with what nationalism means. Here’s the definition, from Merriam-Webster (emphasis mine): “a sense of national consciousness exalting one nation above all others and placing primary emphasis on promotion of its culture and interests as opposed to those of other nations or supranational groups.”

That part in bold is what makes nationalism different than patriotism. While patriotism, like nationalism, shares a pride and belief in one’s own country or values, it doesn’t include the idea of promoting your values and culture as inherently superior to those of others. (Here’s a good breakdown of the differences between patriotism and nationalism.)

Then there the historical context of the word “nationalism.” It primarily conjures two close associations: Nazism and white nationalism.

Meeks also defended Democrat Georgia governor candidate Stacey Abrams over her participation in a protest where the state’s flag was set on fire.

I'm not concerned by how @StaceyAbrams chose to protest a symbol of segregation and Jim Crow-ism. I'm concerned by the tens of thousands of Georgians being disenfranchised by the new Jim Crow of today, and across the US. There is no democracy where there is voter suppression. pic.twitter.com/IcJDHAnmnq

The New York Times reported on the flag burning protest.

Ms. Abrams’s role in the protest, which took place around the end of her freshman year at Spelman College in Atlanta, has begun to emerge on social media on the eve of her first debate Tuesday with her Republican opponent, Secretary of State Brian Kemp. Mr. Kemp and his allies have sought to portray her as “too extreme for Georgia.”

Comparing President Trump to Hitler is ridiculous and by making the comment, Meeks is exposing his left-wing bias against the president.