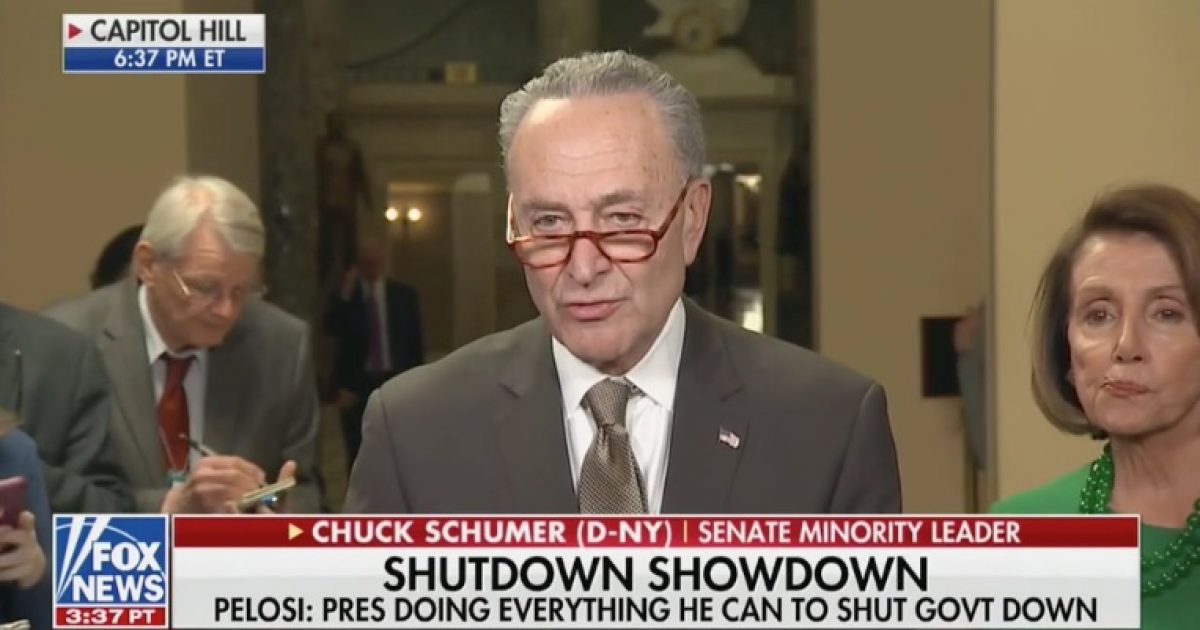 Schumer began, “Today’s events have made one thing clear, President Trump is plunging the country into chaos. The stock market is down another 500 points. General Mattis is stepping down and we know he has real disagreements with the president on Syria and on the wall. And now President Trump is throwing a temper tantrum and creating the Trump shutdown of the government.”

With the House of Representatives passing a spending bill that included funding for the border wall, the pressure to avoid a government shutdown is now on the Senate.

The House passed a stopgap measure Thursday night to fund the government that includes $5 billion for a border wall sought by President Donald Trump. The bill is expected to be rejected in the Senate, and does little to prevent a shutdown on Saturday.

The vote of 217 to 185 on Thursday night puts the House at odds with the Senate, which on Wednesday night passed a funding bill that does not include border wall money.

The Senate will now have to consider the House version before midnight Friday to avert a partial government shutdown, and Majority Leader Mitch McConnell, R-Ky., signaled to members to be ready for a possible vote on Friday at noon.

President Trump reminded House Minority Leader Nancy Pelosi (D-CA) that she was wrong when she claimed Republicans couldn’t pass a spending bill that included funding for the border wall on Twitter.

We all take an oath to protect and defend our country. Border security is an important part of that oath. Your wall will fail in the Senate tomorrow, Mr. President. America cannot afford a #TrumpShutdown. https://t.co/8S7QJzAanT

President Trump put pressure on Schumer in a Tweet:

The Democrats now own the shutdown!

President Trump made an important decision to insist on border wall funding because it’s good policy and politics.

Providing security for the nation is a primary role of government and President Trump made border security and a border wall a big campaign promise.

If Democrats don’t fund the border wall, they will own the government shutdown.