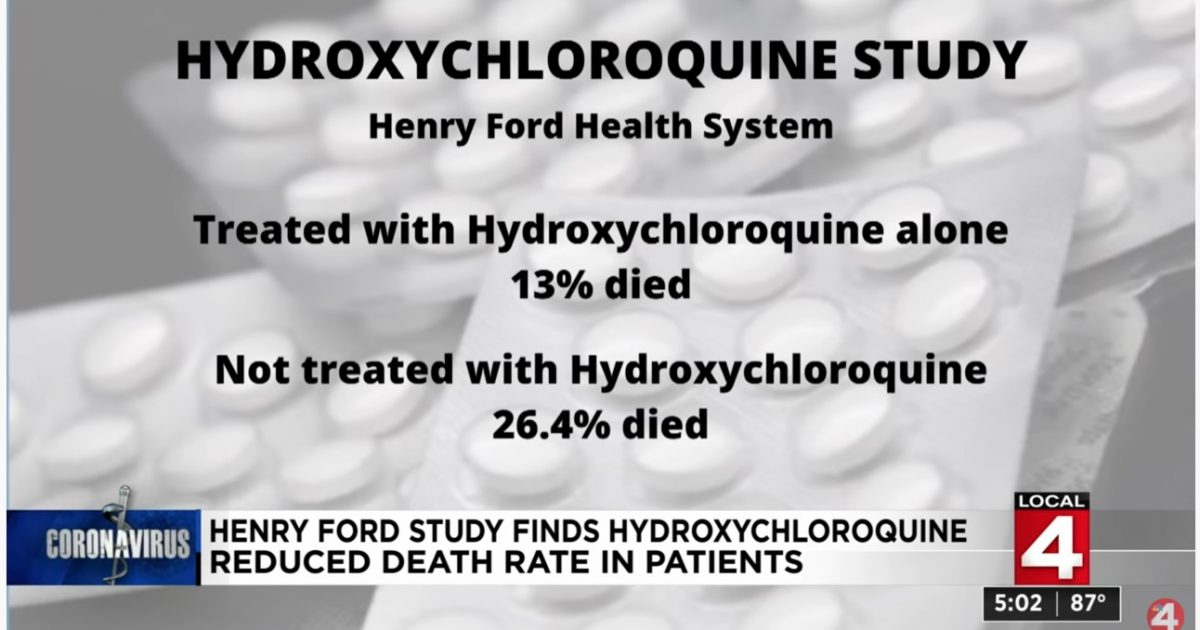 A new study found the use of hydroxychloroquine was associated with about a 50 percent reduction in COVID-19 mortality.

The research study conducted by a group at the Henry Ford Health System in Michigan reported 13 percent of patients died who received hydroxychloroquine as compared to 26 percent that didn’t receive the drug.

The study, “Treatment with Hydroxychloroquine, Azithromycin, and Combination in Patients Hospitalized with COVID-19,” was published in The International Journal of Infectious Diseases.

Sharyl Attkisson summarized the results in a table.

The study result differed with other recent studies on hydroxychloroquine and one of the researchers pointed out one reason is the importance of using the drug early in treatment.

Dr. Marcus Zervos said, “For hydroxychloroquine to have a benefit, it needs to begin before the patients begin to suffer some of the severe immune reactions that patients can have with Covid.”

Treating COVID-19 patients with hydroxychloroquine became a controversy after President Trump made positive statements about the drug.

The FDA recently removed the emergency use authorization for hydroxychloroquine for COVID-19 in hospitals because the agency felt the risk of using the drug was greater than the benefits.

CNN’s bias was evident in its tweet about the study where the words “surprising” and “controversial” were used.

“Surprising” “controversial” – only because u slammed hydroxychloroquine prematurely let’s let the data form r opinions instead of political bias. https://t.co/m9R4TYdPSx

CNN has consistently attacked the use of the drug in previous reports and they continued the trend during an interview with a network medical expert.

Confusion about hydroxychloroquine was exacerbated when a study published in The Lancet concluded its use was associated with an increase in deaths.

However, the study was retracted because the co-author, Sapan Desai, refused to release the underlying data collected by his company Surgisphere Corporation to the medical journal after concerns were expressed about its accuracy by outside scientists.

The Lancet said in a statement:

Our independent peer reviewers informed us that Surgisphere would not transfer the full dataset, client contracts, and the full ISO audit report to their servers for analysis as such transfer would violate client agreements and confidentiality requirements. As such, our reviewers were not able to conduct an independent and private peer review and therefore notified us of their withdrawal from the peer-review process.

Another study by Dr. Zev Zelenko also showed encouraging results with a combination of hydroxychloroquine, Azithromycin and Zinc.

Dr. Zelenko made his research available on Preprints, a website that posts research that has not yet been peer reviewed.

The study using my data is finally available to read online.

I saw 5x less death when patients were prescribed these drugs.https://t.co/JnsVm1Vtw6#ZelenkoProtocol

The new study showed encouraging results and more research is necessary to make the final call on hydroxychloroquine as an effective treatment for COVID-19.

In fact, my Newsmax TV interview on hydroxychloroquine on The Chris Salcedo Show was removed from my YouTube channel.

My appeal was also rejected. 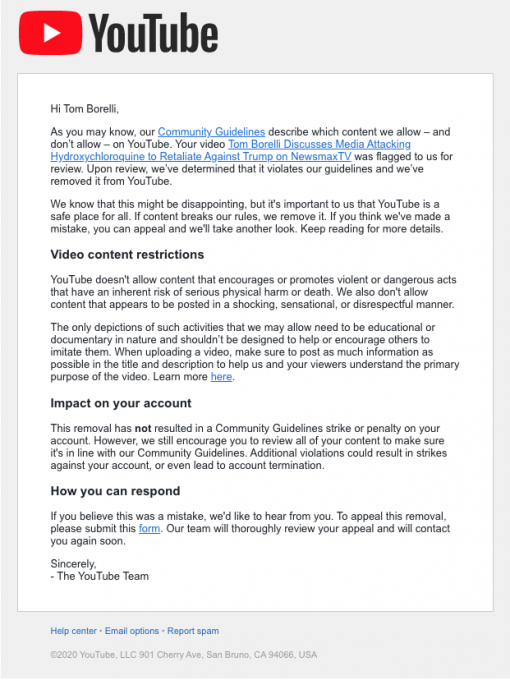 Unfortunately, the politicization of the drug just because President Trump supported it will continue to cloud the research.

In the end, Americans will suffer and potentially die because politics is poisoning the scientific method.