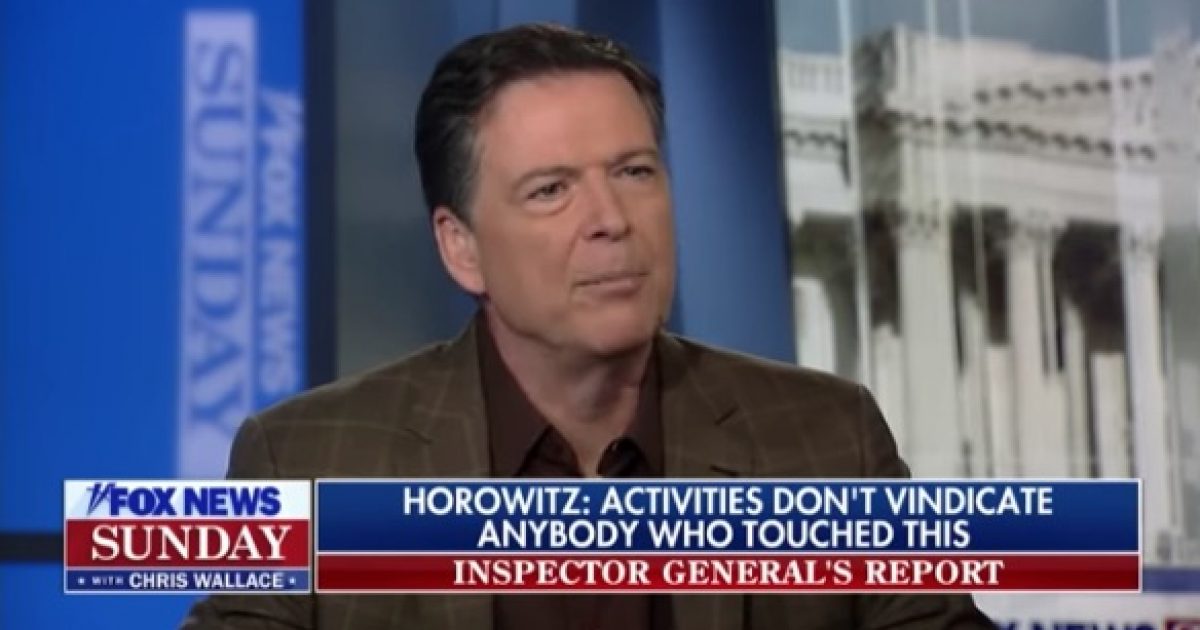 Comey appeared on “Fox News Sunday” with host Chris Wallace to discuss the report and said at one point, “I was wrong.”

“He’s right, I was wrong,” Comey said about how the FBI used the FISA process, adding, “I was overconfident as director in our procedures,” and that what happened “was not acceptable.”

Comey was also questioned about the role the Christopher Steele dossier played over the surveillance of Carter Page, a Trump campaign adviser, with Wallace saying, “You say it was part of a broader mosaic, Horowitz says it played a central role.”

Comey replied: “I’m not sure he and I are saying different things. What his report says is that the FBI thought it was a close call until they got the Steele report, put that additional information in and that tipped it over to be probable cause. It’s a long FISA application and includes Steele material and lots of other things, I don’t think we’re saying different things.”

Following the release of the Horowitz report, Comey downplayed the crucial mistakes made by the FBI while he was the director in a Washington Post op-ed and claimed he was vindicated of wrongdoing allegations per the FISA abuse report while the 2016 Trump campaign was investigated by the FBI.

In a Washington Post opinion-editorial, Comey claimed he was exonerated by the report, glossing over various mistakes the FBI made during the investigation under his watch. Comey denied the existence of a “criminal conspiracy” to prevent President Trump from winning the White House and claimed the FBI did not spy on his campaign.

So it was all lies. No treason. No spying on the campaign. No tapping Trumps wires. It was just good people trying to protect America. https://t.co/9nurCaIBq2

Testifying on his report before the Senate Judiciary Committee last week, led by Chairman Lindsey Graham (R-SC), Horowitz was asked if his report vindicated Comey.

Horowitz crushed Comey’s claim, saying, “I think the activities we found here don’t vindicate anybody who touched this FISA.”

So now Comey’s admitting he was wrong. Wow, but he’s only doing so because he got caught red handed. He was actually caught a long time ago. So what are the consequences for his unlawful conduct. Could it be years in jail? Where are the apologies to me and others, Jim?

As bad as the I.G. Report is for the FBI and others, and it is really bad, remember that I.G. Horowitz was appointed by Obama. There was tremendous bias and guilt exposed, so obvious, but Horowitz couldn’t get himself to say it. Big credibility loss. Obama knew everything!

Not only were Comey’s claims of vindication crushed by Horowitz’s testimony, Comey is not out of the legal woods yet, considering the U.S. Attorney John Durham is conducting a criminal investigation into the origins of the FBI’s Russia collusion investigation.