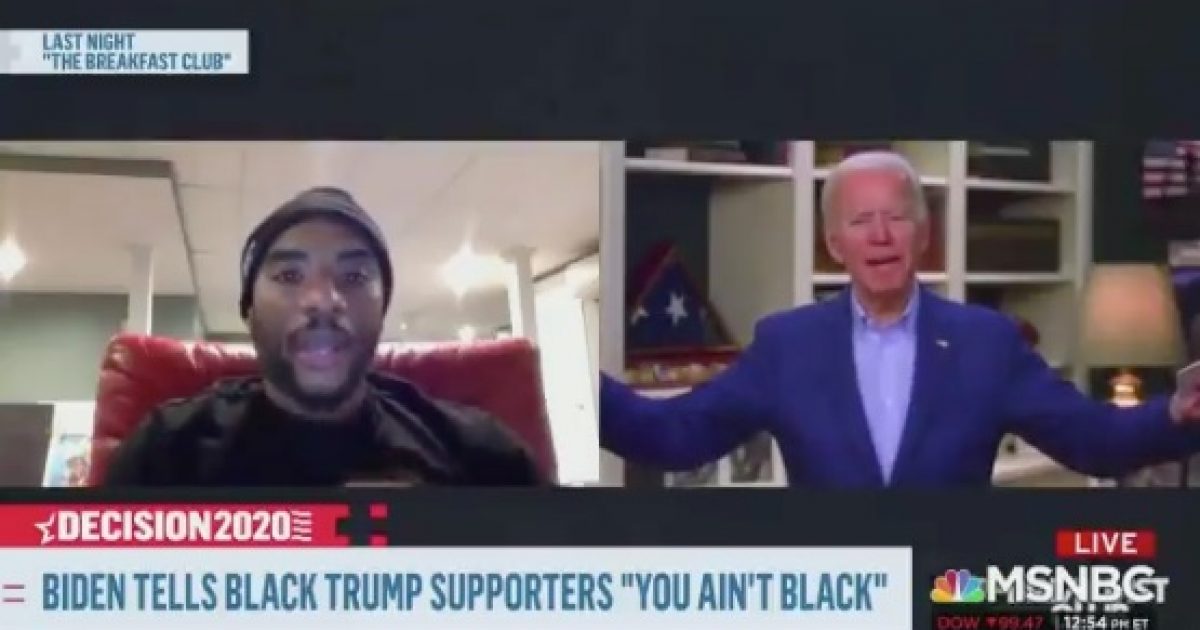 The outrageous insult to blacks was during an interview on “The Breakfast Club,” a radio show with a predominately black audience.

Biden told the host and listeners, “If you have a problem figuring out whether you’re for me or Trump, then you ain’t black.”

Joe Biden: "If you have a problem figuring out whether you're for me or Trump, then you ain't Black." pic.twitter.com/UvYZTjcPqZ

Biden’s senior campaign advisor tried to downplay the fiasco saying his comment was “in jest.”

The comments made at the end of the Breakfast Club interview were in jest, but let’s be clear about what the VP was saying: he was making the distinction that he would put his record with the African American community up against Trump’s any day. Period.

Backlash over Biden’s comment was swift and dominated social media.

I was offended by Biden’s insulting slander against blacks and posted my thoughts on social media.

.@JoeBiden How dare you insult Blacks by assuming we all must think the same way. Trust me I’m a Black independent thinker & will NOT be voting for you. @BlackVoices4DJT @TeamTrump #YouAintBlack https://t.co/zGK4TQGB1K

Senator Tim Scott (R-SC) was unaware of Biden’s demeaning judgment against blacks when first asked about it during an interview and didn’t hold back about what he thought.

Joe Biden’s comments are the most arrogant and condescending thing I’ve heard in a very long time. I am offended, but not surprised. pic.twitter.com/aXiVF6oAwc

“VP Biden’s statement today represents the arrogant and out-of-touch attitude of a paternalistic white candidate who has the audacity to tell Black people, the descendants of slaves, that they are not Black unless they vote for him,” Johnson said in a statement obtained by Fox News’s Bret Baier.

Other criticism of Biden was rampant on social media.

Wow. I just watched former Vice President @JoeBiden… Does he not understand that black and brown skinned people can think for themselves. You don’t determine who we vote for. @DonaldJTrumpJr @FoxNews @espn @CNN @POTUS @realDonaldTrump #YouAintBlack

Notice the use of "aint" pretty condescending !

His comments are repulsive. I was a lifelong Dem until 2016. I felt they were for the little people. My husband, who is most DEFINITELY a strong black man… constantly listened to conservative radio. I'm like WHO are these ppl??? I researched for myself and WOKE THE HELL UP!

It's hard to believe this is the best dems have to offer for the presidency.

Biden’s shocking “you ain’t black” comment highlights the fact that he doesn’t view blacks as individuals with independent thought and they are expected to vote for him simply because of their skin color.

His remarks display the views of many Democrats that blacks are essentially their property and must vote as commanded.

One thing is for sure, the words “you ain’t black” will follow Biden throughout the campaign.