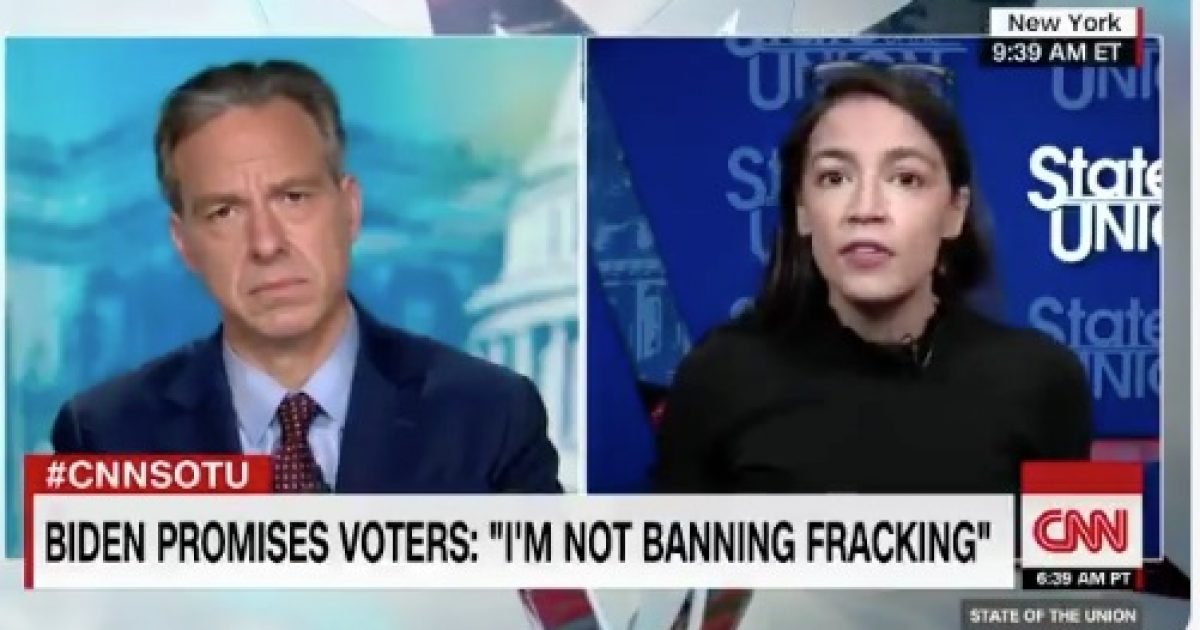 Democrat New York Representative Alexandria Ocasio-Cortez remains passionate about calling for a ban on fracking but she is not troubled with former Vice President Joe Biden’s inconsistent views on ending fracking.

As the election grows closer, Biden is now promising he would not ban fracking which is a complete reversal of his comments during the Democrat primary.

On CNN’s State of the Union, Ocasio-Cortez put criticism of Biden on the back burner over fracking because she wants Biden to win the White House first.

If Biden is elected president, Ocasio-Cortez will lobby to push a fracking ban.

“Vice President Biden has made very clear that he does not agree with a fracking ban… It will be a privilege to lobby him should we win the White House, but we need to focus on winning the White House first,” Rep. Alexandria Ocasio-Cortez says #CNNSOTU pic.twitter.com/NZ5SzTY8Co

Ocasio-Cortez feels the young voters will not be deterred from voting for Biden over his sudden support for fracking because the former vice president is more likely to be influenced by public pressure.

“I think young people are actually quite disciplined and quite realistic and pragmatic in their vote,” Rep. Alexandria Ocasio-Cortez says. “There is no question that Joe Biden is a much better person in that position to be receptive… than Donald Trump.” https://t.co/9Fr3CsdmP7 pic.twitter.com/fzDaCg2RVg

It’s clear Ocasio-Cortez is putting her radical environmentalism on the sidelines for near-term political pragmatism.

About one week out from the election, Ocasio-Cortez doesn’t want to cause Democrat infighting by blasting Biden at this point.

If Biden wins, she knows a fracking ban will follow.

After all, Ocasio-Cortez is the architect of the Green New Deal and she was a big player in putting together Biden’s energy policy.

Biden is misleading the nation about his intentions with fracking and Ocasio-Cortez is playing along with the deception.