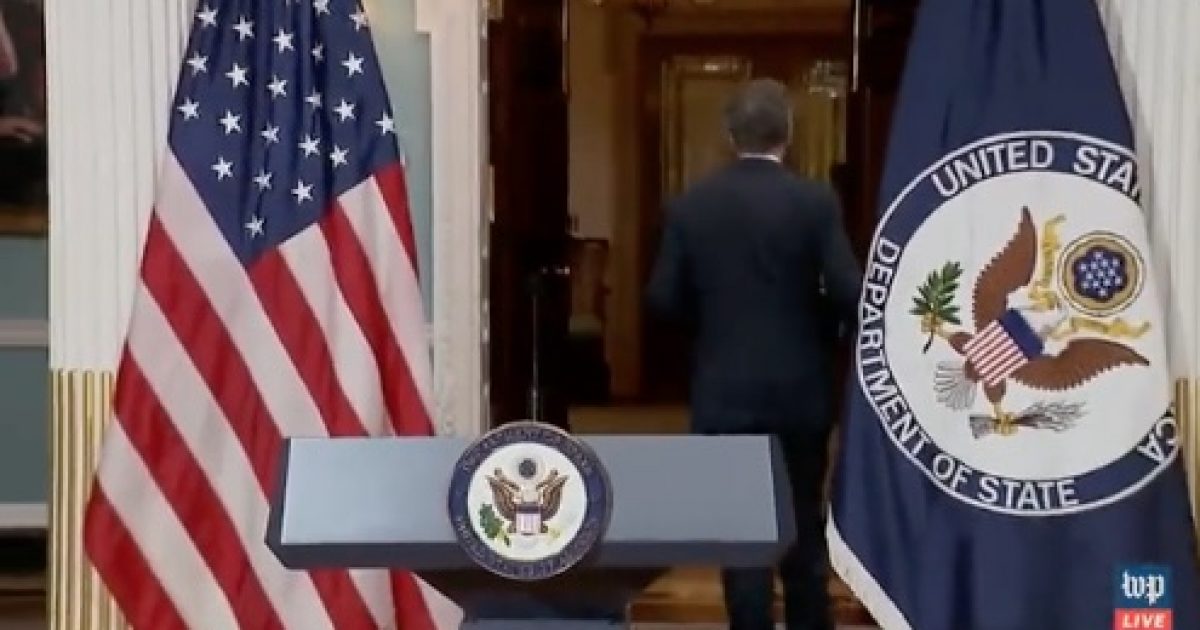 Secretary of State Antony Blinken took a page out of President Biden’s book and turned his back on the media following a press briefing on Monday.

Blinken abruptly walked out of a press briefing after addressing the nation on the recent developments in Afghanistan while someone asked, “Did this administration break its word that no American would be left behind?”

WATCH: Secretary Of State Blinken Turns Back On Reporters Who Ask About Abandoned Americans https://t.co/Um6w94NaKz pic.twitter.com/HOHKZNGVms

During his comments, Blinken was unable to confirm how many Americans were stranded in Afghanistan.

While addressing the nation, U.S. Secretary of State Antony Blinken was unable to say how many Americans were left in Afghanistan after the military finished withdrawing from the country.

His teleprompter said LEAVE NOW at the end, just like Joe’s.

Well that alone is a pretty clear reply as to what they will do…..simply ignore and walk away. Wow

Biden regularly turns his back on the media when asked about his handling of Afghanistan.

Biden calls on a reporter following remarks about #HurricaneIda and the reporter asks him about his disaster in Afghanistan.

Biden immediately states he doesn't want to talk about Afghanistan and walks away. 13 U.S. troops were killed after a chaotic situation Biden caused. pic.twitter.com/mmNPlpciLZ

Biden walks away as he’s asked if he can guarantee that every American will be evacuated before our troops leave. pic.twitter.com/H53GWhYv2h

It’s clear Biden and Blinken don’t want to answer questions regarding the disastrous withdrawal from Afghanistan.

Both Biden and Blinken are ducking the media and it’s an outrageous reaction to their incompetent decision-making.

It’s being reported over 100 Americans were left in Afghanistan despite promises that would not happen – that’s the type of question Biden and Blinken want to avoid.

Americans demand accountability and they will not get it if those responsible will not even face the media.

Hopefully, Biden and Blinken will discover that you can run but you can’t hide from being held accountable.