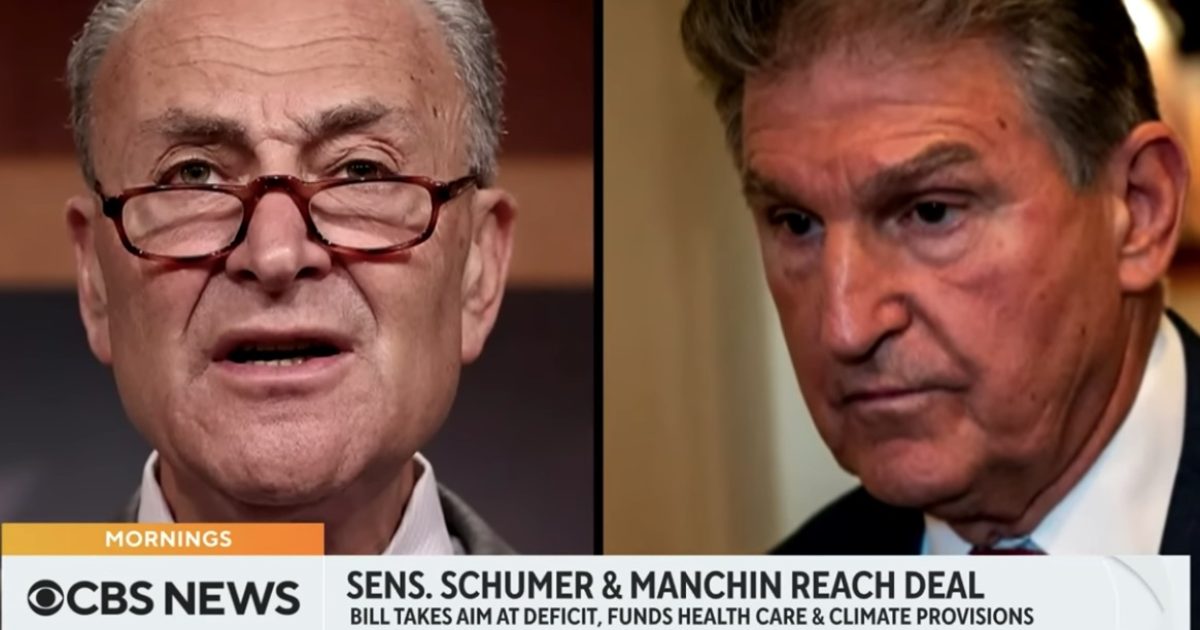 Never doubt the power of The Swamp.

That’s the apparent lesson to be learned from Senator Joe Manchin’s reversal on the energy-related provisions of the pending reconciliation bill. Last month, Manchin derailed the measure which included some $300 billion in energy-related provisions. Manchin was pilloried by climate activists and by former Obama advisor, John Podesta, who declared that Manchin had “single-handedly doomed humanity.” But last Wednesday, Manchin switched his position and agreed to a deal with Senate Majority Leader Chuck Schumer which has been dubiously dubbed the “Inflation Reduction Act of 2022.”

The Manchin-Schumer deal shows, yet again, that the Washington Favor Factory never sleeps. The 700-plus-page bill is filled with outrageously expensive subsidies for the solar and wind sectors and lavishes lollipops on nearly every energy-related special interest in Washington. The legislation is so broad and has so much corporate welfare that it has been endorsed by – get this – Exxon Mobil and the Natural Resources Defense Council.

On Friday, Exxon CEO Darren Woods called the spending bill “a step in the right direction…We’re pleased with the broader recognition that a more comprehensive set of solutions” is needed. A day earlier, Manish Bapna, president of NRDC issued a statement that said “This is the ultimate clean energy comeback — the strongest climate action yet in the moment we need it most. Congress must pass it without delay.”

The energy-related parts of the bill are expected to cost $369 billion. That’s an increase of more than 20% over the cost estimates published just a few weeks earlier. (Talk about inflation!) And while the cost has been pegged at $369 billion, the final invoice for all of the measures in the bill could be far higher. That brings me to my first point: the bill reveals (again) how perverted the parliamentary process in Congress has become.

This legislation will cost hundreds of billions of dollars and have far-reaching impacts on the economy. One media outlet dubbed it “the biggest and most consequential climate change bill ever passed by Congress.” But key provisions in the legislation — including incentives for solar energy via the investment tax credit which author and Substack writer Michael Shellenberger recently estimated could total $260 billion – were never debated in Congress. That’s remarkable. Why? The ITC is the most-expensive energy-related provision in the federal tax code. Last year, solar energy got 267 times more in federal tax credits per unit of energy produced than the nuclear sector did.

Nor any debate about another extension of the production tax credit, the subsidy used by the wind industry. The PTC, which is the second-most-expensive energy-related provision in the federal tax code, expired at the beginning of this year. It was designed as a “temporary” subsidy but it has been extended 13 times, and it has become the main financial incentive that is driving the growing land-use conflicts between the wind industry and towns and counties all across the country. Despite these conflicts, as Shellenberger notes, the subsidy for wind energy could, if certain conditions are met regarding domestically produced content, rise from the current 2.6 cents per kilowatt-hour to 3.1 cents per kilowatt-hour.

These subsidies for solar and wind are blatant examples of corporate welfare being handed out in the name of climate change. Despite staggering costs – and the deleterious impact that the wind and solar subsidies are having on the integrity of the electric grid – these handouts aren’t being debated. Indeed, the total cost and potential impact of the legislation are hardly being mentioned by big media outlets, perhaps because the language in the bill is so convoluted it takes an expert to understand what the legislation will do.

Congress isn’t discussing any of these facts. Instead of debate and deliberation, all of these measures are being rushed through the reconciliation process that allows legislation to pass with just 51 votes in the Senate. Manchin-Schumer reminds me of the 5,593-page Covid relief and spending bill that was approved by Congress in late 2020. The legislation was the longest bill ever approved by Congress. Joe Concha, a columnist for The Hill, dubbed it the “swampiest thing ever.” Concha added that it was “exactly what one would expect from a dysfunctional, tone-deaf Congress: a pork-filled cluster…”

That’s what the Inflation Reduction Act of 2022 is: a pork-filled cluster. Manchin and Schumer have delivered for the NGO-corporate-congressional-climate complex which wants more spending on weather-dependent renewables despite the ongoing energy crisis in Europe, where countries like Germany, Italy, Holland, and others are rushing to purchase and burn as much coal as they possibly can.

Oh, and by the way, the Newcastle coal benchmark now stands over $400 per ton. Nineteen months ago it was selling for $50 per ton.

Finally, be wary of the claims about how world-changing and climate-saving the deal will be. A one-page summary of the deal published by Senate Democrats claimed it “lowers energy costs, increases cleaner production, and reduces carbon emissions by roughly 40 percent by 2030.” That last claim was dutifully reported by the New York Times without any context or skepticism. The Times said the deal will “put the United States on track to slash its greenhouse gas emissions to roughly 40 percent below 2005 levels by 2030.”

Furthermore, as Shellenberger has reported, the Joint Committee on Taxation determined that the Manchin-Schumer bill will raise taxes “by $3 billion more on Americans earning below $200,000 per year than on Americans earning between $200,000 and $500,000 per year.” In addition, Arizona Sen. Kyrsten Sinema reportedly wants changes in the bill. The Wall Street Journal cited one investment firm that “put the chance of the deal’s passage at just 65 percent, saying that among other risks, progressives may not agree to permitting overhauls that help boost fossil-fuel production.”

In short, this deal may be a long way from becoming law. But whether it becomes law or not, it shows again that the Washington Swamp will always deliver to special interests.
__________

Robert Bryce is the host of the “Power Hungry Podcast,” executive producer of the documentary, “Juice: How Electricity Explains the World,” and the author of six books, including most recently, “A Question of Power: Electricity and the Wealth of Nations.” Follow him on Twitter: @pwrhungry