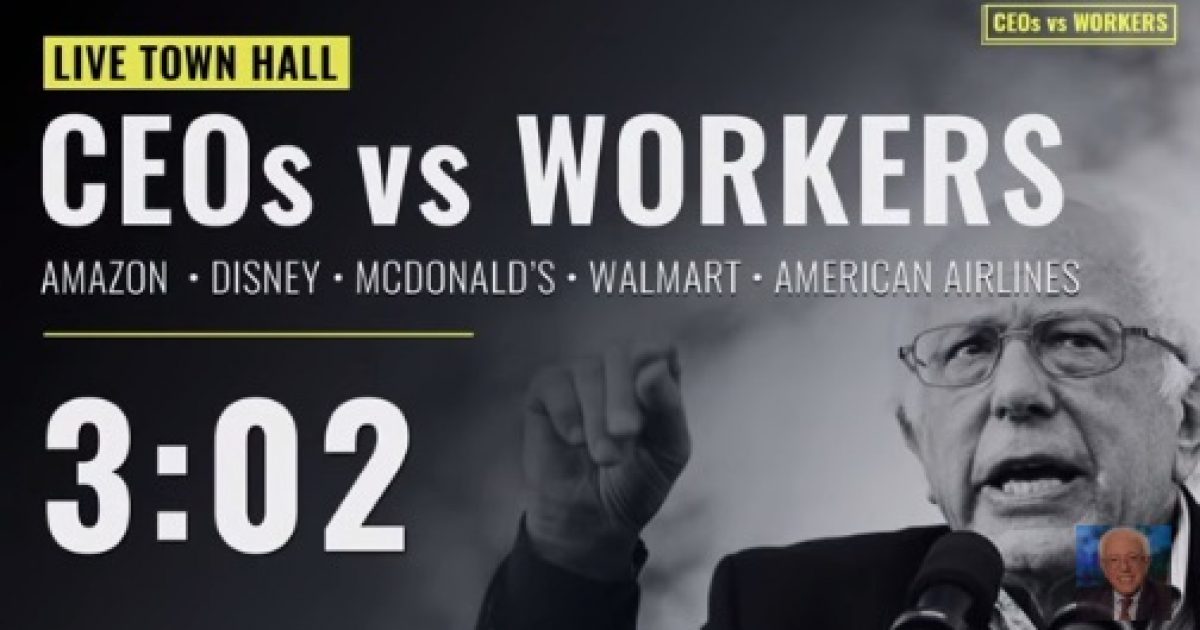 In a USA Today commentary, Sanders used the class warfare card to promote his views.

While the very rich continue to get much richer, our country has more income and wealth inequality than at any time since the 1920s. In America today, the top 0.1 percent owns almost as much wealth as the bottom 90 percent. The three wealthiest people in this country own more wealth than the bottom half of Americans — 160 million people.

Meanwhile, the median household in America has less wealth than it did 35 years ago after adjusting for inflation, and the average wealth of those in the bottom 40 percent is virtually zero. The wealth gap between white Americans and African-Americans has more than tripled over the past 50 years. Shockingly, the median white family has almost 10 times as much wealth as the median black family today.

All of this may sound like a “booming economy” to Donald Trump, but it sure doesn’t sound like it to me

Does Disney CEO Bob Iger have a good explanation for why he is being compensated more than $400 million while workers at Disneyland are homeless and relying on food stamps to feed their families?

Today Jeff Bezos, the CEO of Amazon, became the richest man in modern history with a net worth over $150 billion. But will he face his own workers at our town hall tonight? Probably not. https://t.co/LHPy5CREPn pic.twitter.com/KchChTp8i1

Keeping with the theme of attacking CEOs, Sanders hosted a CEOs vs Workers Town Hall meeting.

Sen. Bernie Sanders (I-Vt.) will host a live streamed town hall tonight in Washington at 7 p.m. to address the enormous disparity between the wealth of corporate executives and the wages and treatment of the companies’ workers. Sanders will be joined by workers from Amazon, Disney, McDonald’s, American Airlines and Walmart, and he has invited the CEO of each company to attend.

Sanders hopes to rally the left-wing base by playing the inequality card and by attacking capitalism as a means to generate political support.