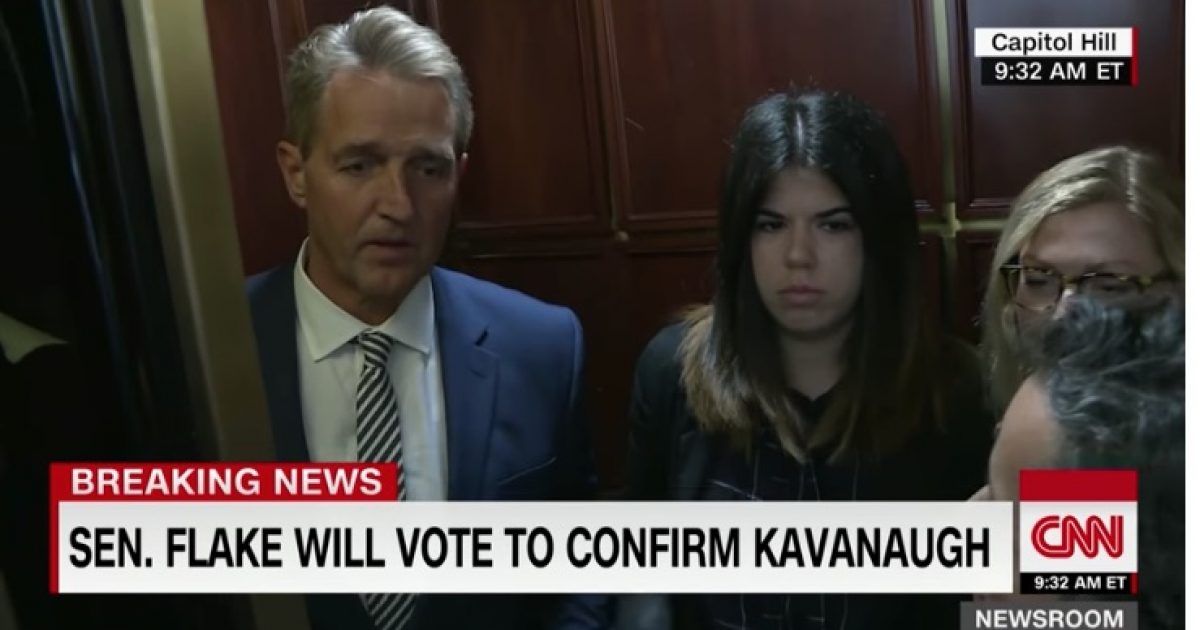 Flake did vote to move the confirmation out of the Senate Judiciary Committee but he added the condition that he would not vote to confirm Judge Kavanaugh until the FBI completed an investigation of the allegations made by Christine Blasey Ford.

The last-minute condition demanded by Flake is tied to anti-Kavanaugh activists that cornered the Senator in an elevator and criticized him for supporting Judge Kavanaugh.

The Daily Beast reported on the exchange between Flake and two anti-Kavanaugh activists, Maria Gallagher and Ana Maria Archila.

“It was all kind of a blur,” Gallagher recalled in an interview with The Daily Beast. “We all ran after him. We held open the elevator and I just started telling him why it was important and what had happened to me and why he should not let Brett Kavanaugh on the Supreme Court.”

What followed was an excruciating exchange that lasted only five minutes in time but could, just maybe, change the course of history. After another woman, Ana Maria Archila, admonished Flake for supporting Kavanaugh, Gallagher jumped in.

“I was sexually assaulted and nobody believed me,” she said. “I didn’t tell anyone, and you’re telling all women that they don’t matter.”

“I’ve ordered the FBI to conduct a supplemental investigation to update Judge Kavanaugh’s file,” Trump said in a statement. “As the Senate has requested, this update must be limited in scope and completed in less than one week.”

Democrats and their left-wing activist allies are going all out to stop Judge Kavanaugh from getting on the Supreme Court.

The effort is successfully delaying the confirmation vote and throwing the entire political climate into chaos.