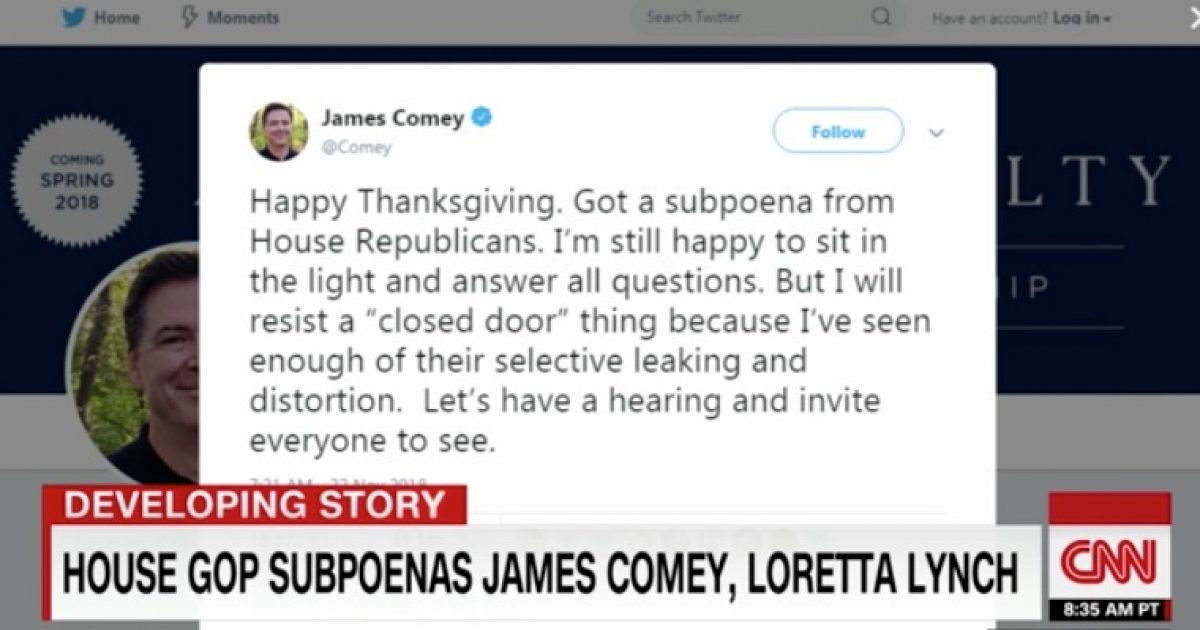 Both Comey and Lynch were subpoenaed by the House Judiciary Committee for answers over “the Department of Justice’s actions during the 2016 presidential campaign.”

House Judiciary Chairman Bob Goodlatte has issued subpoenas for former FBI Director James B. Comey and former Attorney General Loretta Lynch, demanding that both answer questions about the Department of Justice’s actions during the 2016 presidential campaign.

Mr. Goodlatte, a Virginia Republican, issued the subpoenas late Wednesday to get their testimony on the record before Democrats take over the House in January. The Democrats are expected to terminate the GOP probe into whether anti-Trump bias within the ranks of the FBI and Justice Department influenced investigations related to the election.

Comey, defiant about testifying behind closed doors citing “transparency,” Tweeted about the subpoena:

Happy Thanksgiving. Got a subpoena from House Republicans. I’m still happy to sit in the light and answer all questions. But I will resist a “closed door” thing because I’ve seen enough of their selective leaking and distortion. Let’s have a hearing and invite everyone to see.

House Republicans can ask me anything they want but I want the American people to watch, so let’s have a public hearing. Truth is best served by transparency. Let me know when is convenient.

Last year, Comey declined to answer several questions before the Senate Intelligence Committee citing he was unable to do so because of the “open setting.”

In his testimony before the Senate Intelligence Committee hearing on Thursday morning, former FBI director James Comey declined to answer many of the hot-button questions senators tossed at him—at least, in an “open setting.”

These moments are notable, since Comey’s refusal to answer in public indicates that the topic touches on classified information or, potentially, to what he believes to be a continuing FBI investigation.

In an interview, South Carolina Republican Representative Trey Gowdy talked about his concerns prior to Comey being subpoenaed.

He noted that the last time Comey publicly testified before Congress, the former FBI director responded nearly 100 times with some variation of “I cannot answer that question in this setting.”

“So why in the world would he want to go back to a setting where he knows he can’t answer all the questions?” Gowdy said, adding that he would need much more than five minutes to adequately question Comey.

Republican lawmakers have been trying to get to the bottom of “deeply rooted bias” among FBI and DOJ personnel and questions still remain over how the agencies handled Hillary Clinton’s email investigation.

Several Republicans have said they believe that Mr. Comey and Ms. Lynch were part of a deeply rooted bias within the F.B.I. and the Justice Department that allowed Ms. Clinton to escape prosecution for her use of a private email server during her time as secretary of state. The Republicans have also alleged impropriety in the origins of the investigation into the Trump campaign’s connections to Russia.

With Democrats seizing the majority in the House in the midterm elections — and preparing their own wave of subpoenas against Trump administration officials — House Republicans have a short window to press their case against Mr. Comey and Ms. Lynch.

Comey is demanding an open hearing to hide behind his “open setting” argument, to create a distracting media circus, and would mean less time for questions and answers.