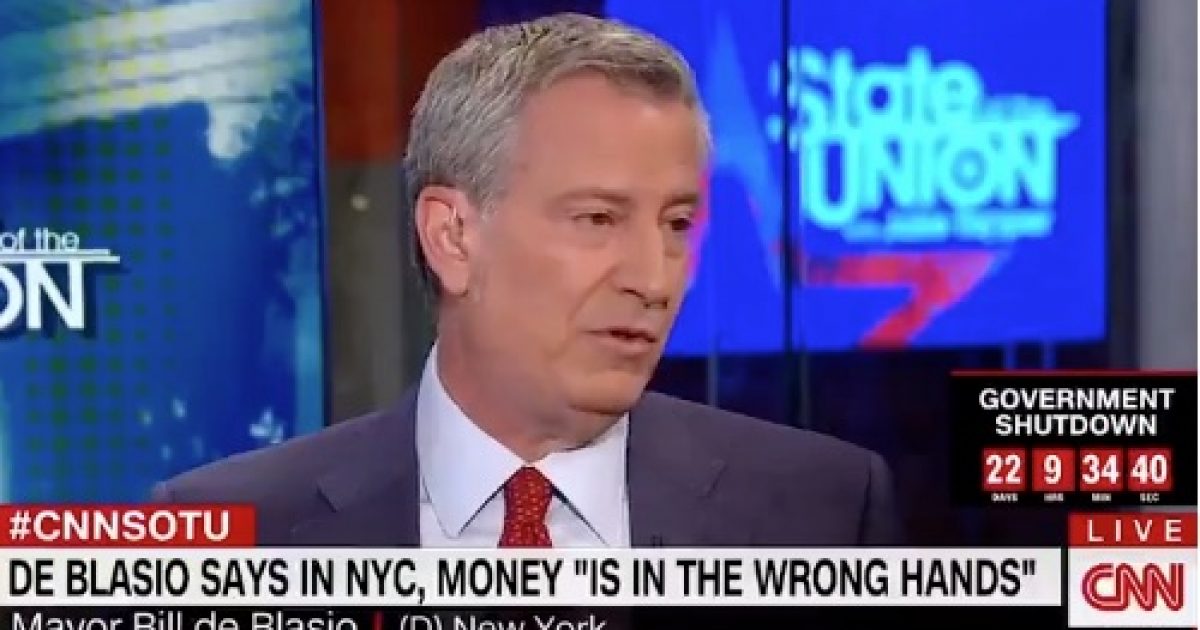 New York City Mayor Bill de Blasio is extremely bullish on progressive policies and he proudly defends his idea of wealth redistribution because he thinks money “is in the wrong hands.”

I won that race in 2013 because of the grass-roots power that pundits and pontificators cannot understand. We put forward a clear, populist message: New York City was a tale of two cities, with unacceptable levels of inequality that had to change. The voters agreed.

We took from the great example of Franklin Delano Roosevelt — that you must make change people can feel and must do so quickly. We implemented prekindergarten for all, we created an ambitious mental-health program called ThriveNYC, and we proposed the biggest affordable-housing plan in the city’s history. Meanwhile, crime fell to record lows when we ended the era of stop-and-frisk and created neighborhood policing.

Last week, I announced a similar policy in that same mold: We will deliver guaranteed health care for all New Yorkers. If one of our residents is insurable, we’re going to enroll her in New York City’s public option. If she can’t afford insurance or she’s ineligible, we’ve created a way for her to get guaranteed, quality care in a public hospital or clinic.

In addition to writing a commentary, de Blasio promoted his new health care plan and an attack on the wealthy on CNN.

It’s no accident that working people are taking home less money while the 1 percent are doing better than ever — it’s an agenda. pic.twitter.com/g22iVyluYU

It started with a quote from de Blasio:

Here’s the real truth, brothers and sisters. Without the “wrong hands” that Mr. de Blasio despises, there would be no wealth or income to redistribute. Without the fruits of capitalist invention and business success, there would be no philanthropists to preserve the parks, to rebuild crumbling public spaces, to donate to the museums that give the non-rich a glimpse of great art and history, or to provide an alternative to failing public schools that cheat poor children of opportunity.

As for Mr. de Blasio’s right hands, there are those failing schools. And don’t forget the New York City Housing Authority, which last year had to sign a consent decree with the federal government for lying about its failure to provide safe and sanitary conditions.

Progressive politicians are the rising stars in the Democrat party and the lure of free stuff is appealing and tempting for low- and middle-income voters.