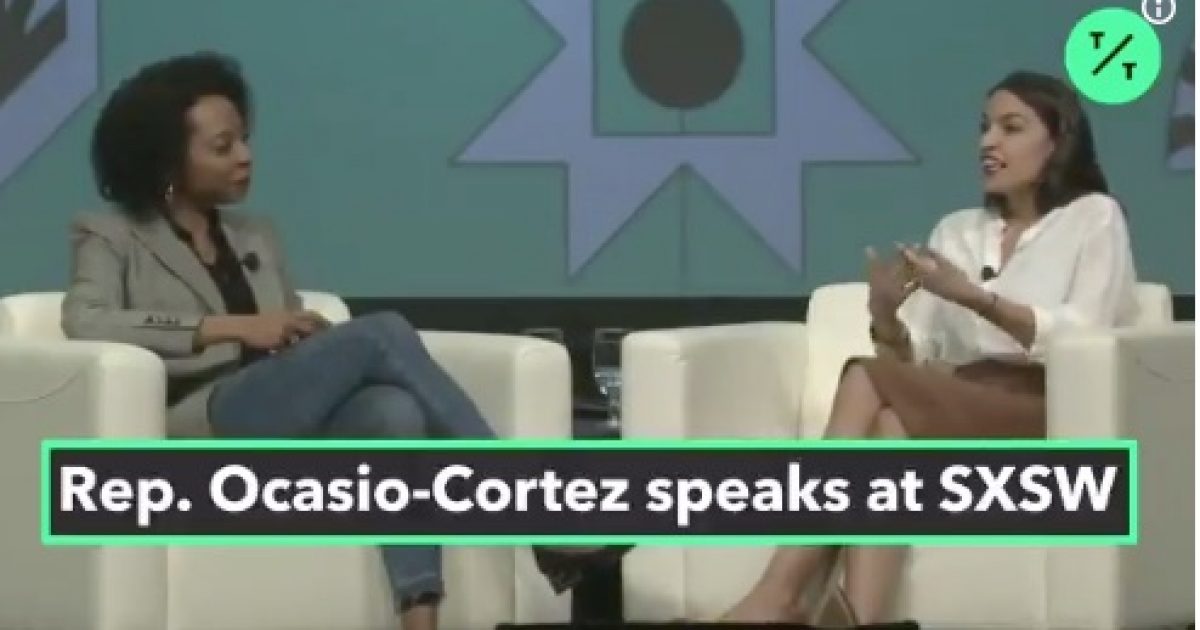 Ocasio-Cortez was interviewed by Briahna Gray from The Intercept for a featured session called, “Alexandria Ocasio-Cortez and the New Left,” where she criticized capitalism because of its profit motive.

Ocasio-Cortez’s embrace of democratic socialism has been emphasized by the right, which seeks to paint her as out of touch with mainstream American values. But arguably, it’s her progressive ideals that provide the basis for a human-centered politics that connect with a majority of Americans.

The Intercept’s Senior Politics Editor Briahna Gray will talk to Ocasio-Cortez about identity, the race/class divide, and how these factors are likely to play out in the years ahead.

She directed some of her sharpest comments at an economic system that she said values profit over people.

“Capitalism is an ideology of capital –- the most important thing is the concentration of capital and to seek and maximize profit,” Ocasio-Cortez said. And that comes at any cost to people and to the environment, she said, “so to me capitalism is irredeemable.”

Though she said she doesn’t think all parts of capitalism should be abandoned, “we’re reckoning with the consequences of putting profit above everything else in society. And what that means is people can’t afford to live. For me, it’s a question of priorities and right now I don’t think our model is sustainable.”

During her comments, Ocasio-Cortez also endorsed her style of political activism by slamming moderate political stances.

In her remarks, Ocasio-Cortez torched political moderation, which she equated with worshiping mediocrity, defended democratic socialism and took a question from Bill Nye, better known as The Science Guy.

“Moderate is not a stance. It’s just an attitude towards life of, like, ‘meh,’” she said, shrugging her shoulders for emphasis. “We’ve become so cynical, that we view ‘meh,’ or ‘eh’ — we view cynicism as an intellectually superior attitude, and we view ambition as youthful naivete when … the greatest things we have ever accomplished as a society have been ambitious acts of visions.

“We should be scared right now because corporations have taken over our government.” @AOC explains why she is in favor of democratic socialism at #SXSW #tictocnews pic.twitter.com/1lSLYCyTew

Ocasio-Cortez is aggressively attacking capitalism to replace it with socialist type government policies.