The Senate failed twice to pass a $2 trillion China coronavirus relief bill in the past two days.

McConnell called out the Democrats for pushing fuel efficiency standards for airlines and wind and solar tax credits.

These are just some of the unrelated demands Senate Democrats have used to slow relief for workers and families:

This is a crisis. Why is only one side acting like it? pic.twitter.com/MRfnXT1HJ2

House Speaker Nancy Pelosi (D-CA) crafted her own 1,400-page bill and it was packed with green energy special agenda items and other Left-wing political goals.

Fox News assembled some of the items in Pelosi’s bill. 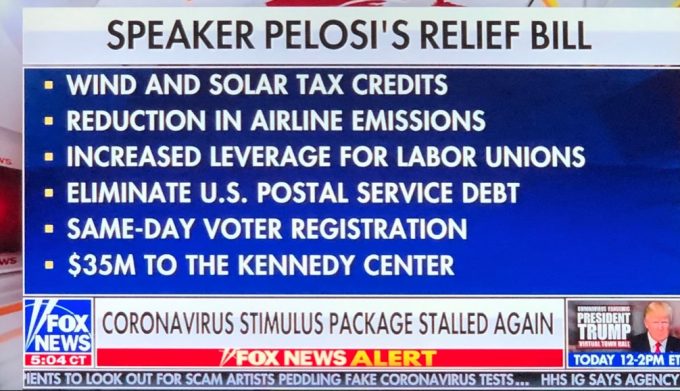 On his Fox News show, Tucker Carlson discussed some of the identity politics items that were put in the bill.

Democrats are using the economic crisis to advance their political and special interests agenda.

Once again, Democrats are showing they are willing to play politics with the lives of Americans in their never-ending quest for power.