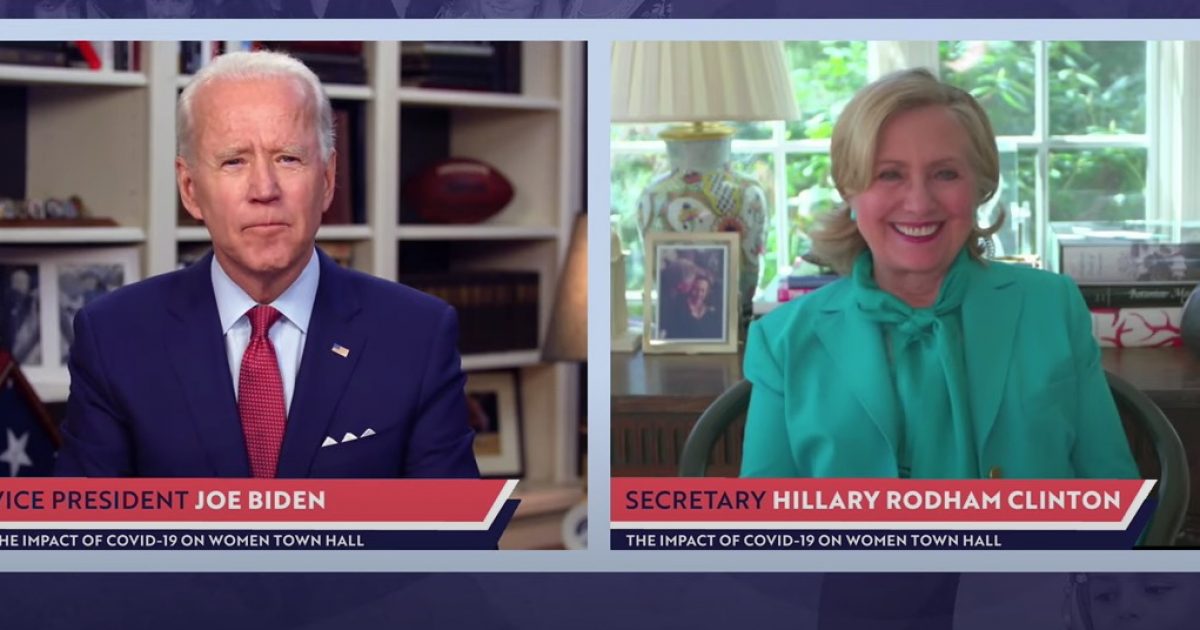 Clinton made the endorsement while appearing with Biden during his Women’s Town Hall on COVID-19 online event.

Media Research Center’s NewsBusters unit released a 1993 video of CNN’s “Larry King Live,” where Reade’s mother called in asking how to address a sexual assault incident by a “prominent Senator.”

BREAKING: Is this the mother of Joe Biden's accuser talking to CNN in 1993? pic.twitter.com/rF7jw35s2F

Last week, The Intercept reported on new evidence in Reade’s allegation against Biden.

Reade confirmed the voice on the call was that of her mother who passed away in 2016.

In a telephone interview with Fox News on Friday night, Reade confirmed that her mother called in to the show.

This is my mom. I miss her so much and her brave support of me. https://t.co/okU80kqWAI

Reade hit back at critics over her sexual assault allegation against Biden on social media.

Reach out to me directly and ask ?
I am not an " imperfect victim". I was lifelong Democratic supporter single mom that put myself through law school and I was raped by Joe Biden, my former boss, a Democrat.
There are no excuses for institutionalized rape culture. Thank you. https://t.co/hOQTxAzfa5

Reade’s allegation about Biden was backed up by her brother, her friends, and most recently a neighbor.

Now Lynda LaCasse, who was Reade’s neighbor in the 1990s, says Reade told her about the alleged assault around the time it happened. LaCasse said that when they were neighbors in 1995 or 1996, Reade told her “about the senator that she had worked for and he put his hand up her skirt.”

Other supporters for Reade took to social media.

I've been a director at 2 rape crisis centers in NY. I teach about trauma/sexual violence at universities. I train judges, police, educators, medical pros and mental health pros about it. I've also spoken w/Tara Reade, and I believe she was raped by Joe Biden. #IBelieveTaraReade

I believe you Tara. I stand by you and everyone of us that has been a victim. Thank you for your bravery. Thank you for sticking up for yourself. I am so angry for you. Stay strong there are so many women out there that do not understand that we are in this together.

We are standing in solidarity with you.

Democrats, including many women who are seeking to be Biden’s vice president choice, are defending the former vice president against the sexual assault allegation made by Reade.

The Democrats’ defense of Biden stands in sharp contrast to their aggressive criticism of now-Supreme Court Justice Brett Kavanaugh during his confirmation hearing when he was accused of sexual assault by Dr. Christine Blasey Ford.

During the Kavanaugh hearings, former Georgia Democratic gubernatorial candidate Stacey Abrams said she believed women “survivors of violence” and they “deserve to be supported and to have their voices heard” during the Kavanaugh confirmation hearings.

After the courageous and compelling testimony from Dr. Christine Blasey Ford yesterday, it is shameful that Kavanaugh's nomination is being rushed forward.

I believe women, and I believe survivors of violence always deserve to be supported and to have their voices heard. https://t.co/rtT1PQr4Zq

Biden has not been asked by the media about Reade’s sexual assault allegation.

The Biden campaign issued a statement.

Fox News reached out to the Biden campaign on Friday for comment. The campaign referred Fox News to a statement earlier this month from Biden Deputy Campaign Manager Kate Bedingfield that said: “What is clear about this claim: it is untrue. This absolutely did not happen.”

Clinton and fellow Democrats standing behind Biden prior to an investigation of Reade’s allegation highlights their double standard over women who claim to be sexual assault victims.

If a Republican is accused of sexual assault the woman must be believed, however, if a Democrat is accused the woman is ignored.