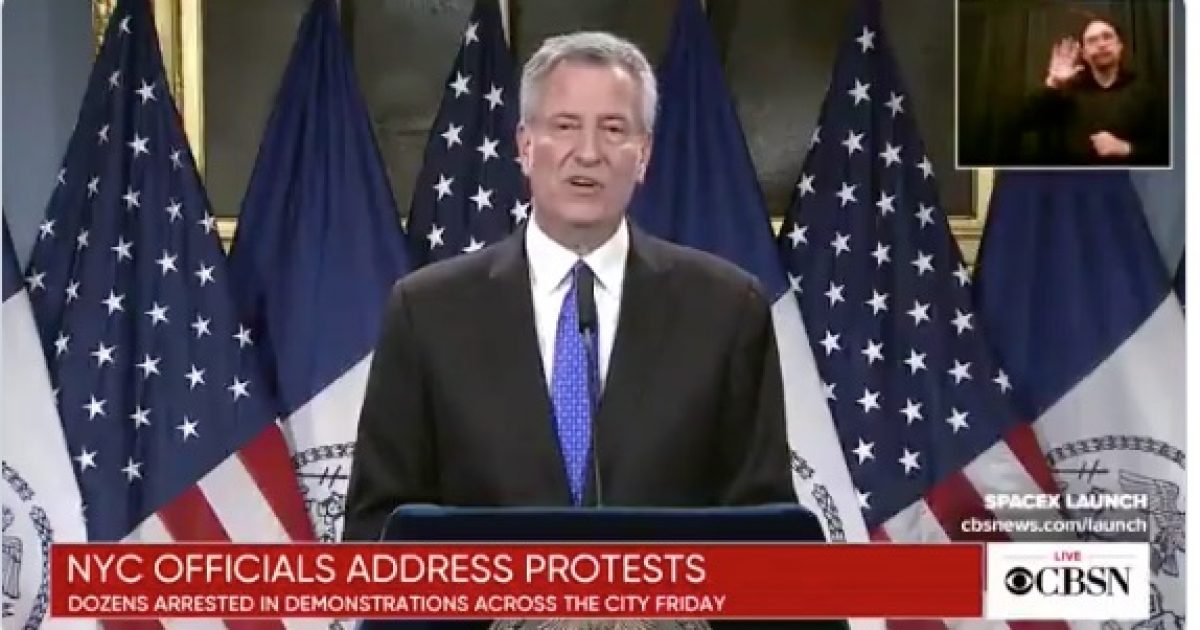 During a press briefing, de Blasio said the president is responsible for creating an environment of racial tension.

de Blasio said, “there’s been an uptick in tension, hatred and division since he came along.”

NYC Mayor Bill de Blasio is now blaming the riots on President Trump saying he “helped to create” the “atmosphere” for them. pic.twitter.com/ENUbjrayrA

de Blasio is not alone in his criticism of President Trump over the past few days.

Chicago Democrat Mayor Lori Lightfoot ripped into the president for his Tweets about the riots that followed the tragic death of George Floyd in Minneapolis.

Lightfoot dropped the F-bomb in a message to President Trump.

Chicago Mayor Lori Lightfoot: "I will code what I really want to say to Donald Trump… It begins with 'F' and it ends with 'you.'" https://t.co/7jaNIh9boh pic.twitter.com/DuuYoeQtzu

Pelosi said, “I’m not paying too much attention to what the president says.”

“I’m not paying too much attention to what the president says,” Speaker Nancy Pelosi on Trump tweets.

“I think to take his bait time and time again is just a gift to him because he always wants to divert attention from what the cause of the response was.” https://t.co/sVerbxGgdM pic.twitter.com/i6302lt9Yd

Minnesota Democrat Representative Ilhan Omar also criticized the president over a lack of leadership on his part.

Minnesota Rep. Ilhan Omar says in the absence of leadership by President Trump, Americans are stepping up to protect each other amid unrest: “This president has failed in really understanding the kind of pain and anguish many of his citizens are feeling.” https://t.co/sVerbxGgdM pic.twitter.com/Nrbubn9pkG

Atlanta Mayor Keisha Bottoms encouraged President Trump not to speak about the riots and should “… just be quiet.”

Bottoms made her comments about the president on CNN’s “State of the Union.”

She added, “This is like Charlottesville all over again. He speaks and he makes it worse.”

It’s clear Democrats and their media allies are trying their best to exploit the senseless death of George Floyd in an effort to damage President Trump.

Unfortunately, the politicization of Floyd’s death distracts the nation from the horrible incident.